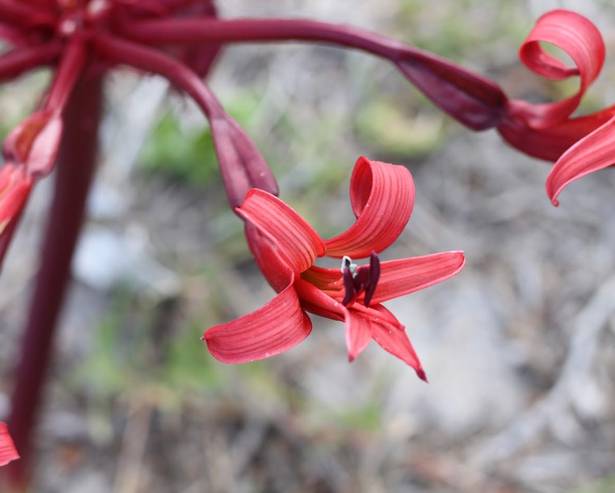 Our beautiful country is home to a plethora of fascinating indigenous plants and especially boasts with an incredible bulb diversity. This week we admire a spectacular bulb that will stop you dead in your tracks if encountered in the veld. The one and only - Candelabra Flower.
A quick look at Candelabra Flower:
Latin name | Brunsvigia orientalis**
Common Names | Candelabra Flower, King Candelabra, Chandelier Lily, Sore-eye Flower, Kandelaarblom, Koningskandelaarblom, Perdespookbossie, Rolbossie, Seeroogblom
Family | Amaryllidaceae
In late summer, Brunsvigia orientalis bursts from the bare ground to reveal its flowering stalk carrying 20 - 80 upward-facing scarlet flowers - an open invitation for birds to perch for a while and enjoy a sip of sweet nectar in exchange for pollination. 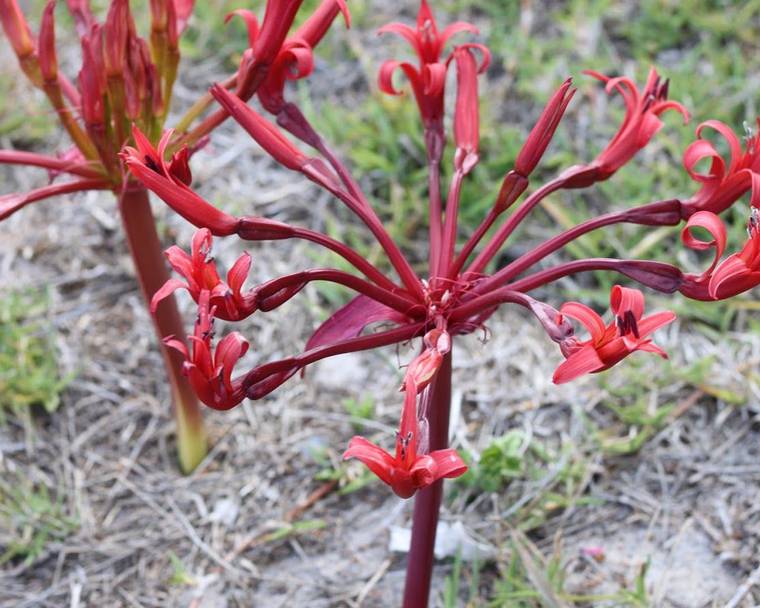 Brunsvigia orientalis, known as the Candelabra flower due to the candelabrum-like shape of the inflorescence, is a large bulb within the Amaryllis family and rare relative of Crinum and native Hippeastrum. 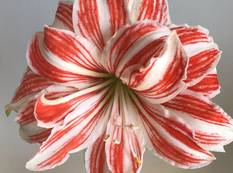 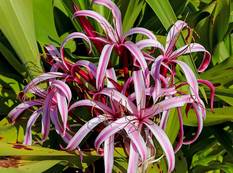 Naturally distributed in the Western Cape, Brunsvigia orientalis can be seen flowering in February and March on sandy lowland coastal areas. After flowering, when the winter rains arrive, this bulbous perennial produces four to six large, tongue-shaped leaves that lie flat on the ground. The leaves will continue to grow throughout winter until the plant goes dormant again during the warm summer season. During this period of dormancy, the above-ground plant material dries out to prevent water loss and the plant survives the long dry season in the form of a large underground bulb. 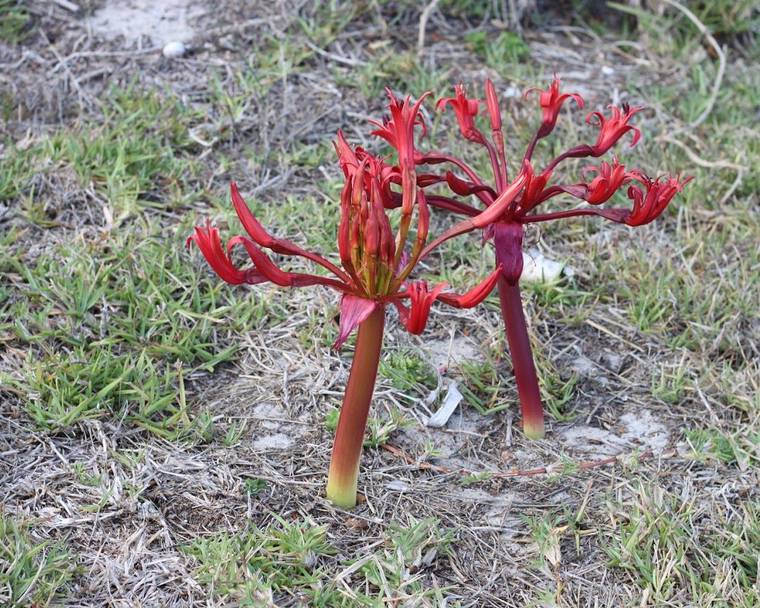 The Afrikaans vernacular name 'rolbossie' points to the interesting dispersal mechanism this plant uses to disperse its seed. After flowering, the now dried flower cluster breaks off from the stalk and, with a little help from the wind, rolls around like a tumbleweed, spreading the seed far and wide. 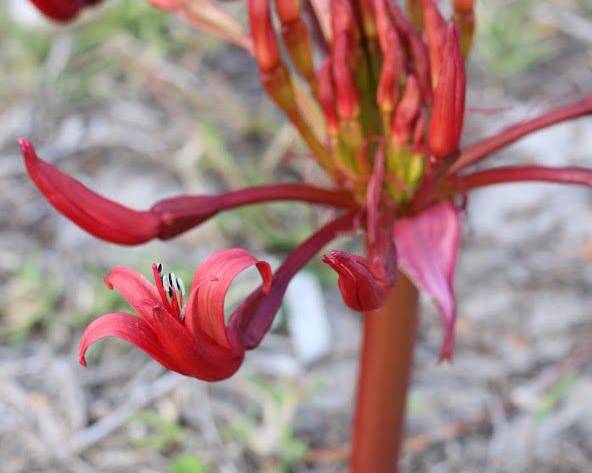 Brunsvigia orientalis grows well in a sunny spot in a sandy, well-draining soil mix. Mix three parts sand and one part compost.
Seed should be sown immediately after harvesting. Sow in deep seed trays and cover the seed lightly with soil so that it is still visible. Water thoroughly and then only again when the first leaves make their appearance. After the leaves have appeared, water once every two to three weeks. Keep an eye on the leaves, when they start turning yellow, stop watering completely and only resume watering after the dormant period. Plants grown from seed can be kept in the tray for two years before planting out into large individual pots or into open ground. 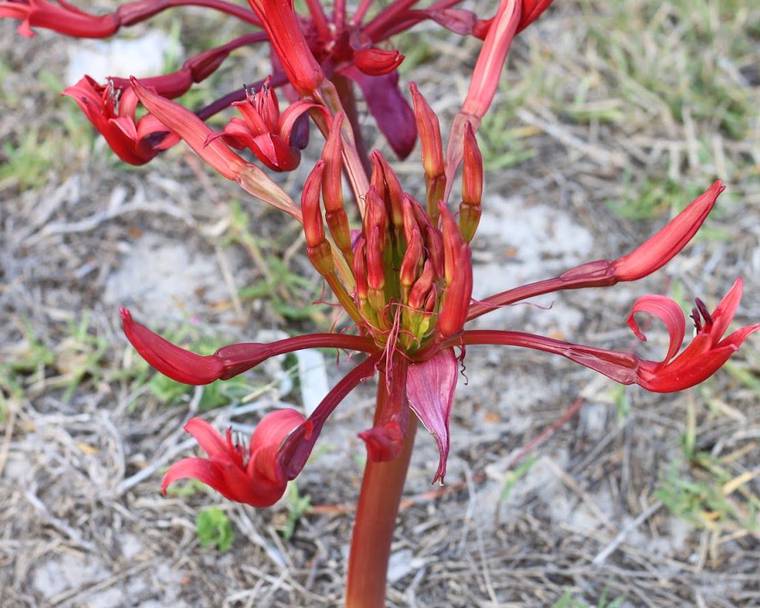 When it comes to watering, it is best to mimic what happens in its natural environment - water adequately during winter and spring and keep it dry in summer during dormancy. If you’re growing Brunsvigia orientalis outside of its natural distribution range, it would be best to grow in a container where watering can be controlled. Brunsvigia orientalis reaches flowering size at six to eight years, and under the right conditions with the right care, it is a long-lived bulb.

To learn more about this beautiful bulb tap the plant profile below.

If you're looking for an ornamental shrub for sunny or shady spots, and attract wildlife to your garden? Look no further than...

If you’re looking for a low-maintenance, waterwise, evergreen perennial that is perfect for those hot corners in the garden... 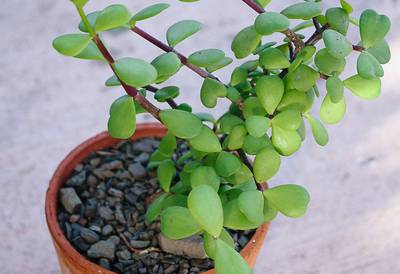 Indigenous plant of the week | Spekboom

With such a rich floral diversity in our beautiful country, we don't have to look further than our own doorstep for plants...