Ecoworm
Ecoworm Soil Extract For Flowers - Growth Stimulant 1L
£9,99
When we work in our gardens, we often find these big, creamy-white grubs, often referred to as worms, in the soil or in compost. In Afrikaans, we call them ‘miswurms’. They are actually not worms, but beetle larvae of the Scarabaeidae family. This beetle family contains all the scarab and chafer beetles.
In most gardens, these grubs will either be of the Fruit Chafer beetle), Pachnoda sinuata, or the Rhinoceros beetle), Oryctes boas, or the Black Maize beetle), Heteronychus arator. It is not always possible to distinguish between the species in their larval stage, because many species look very similar.

An adult beetle, frequently seen on roses and fruits.

Lifecycle of a grub

Recently, fellow gardener @jbrink shared an awesome post on grubs and their lifecycle in an average South African garden.
"The adult beetle will lay its eggs in soil when it is time to reproduce. Eggs would then hatch into Grubs, and grow to a stage where the next lifecycle kicks in, and it's time for the grub to turn into a beetle. During this lifecycle stage, the grub would cocoon itself with the surrounding soil, into a semi-hard shelled ball, in which the transformation takes place. One can identify this stage in shallow pots, by looking at the soil top-layer. It would resemble small and beady clumps of soil." 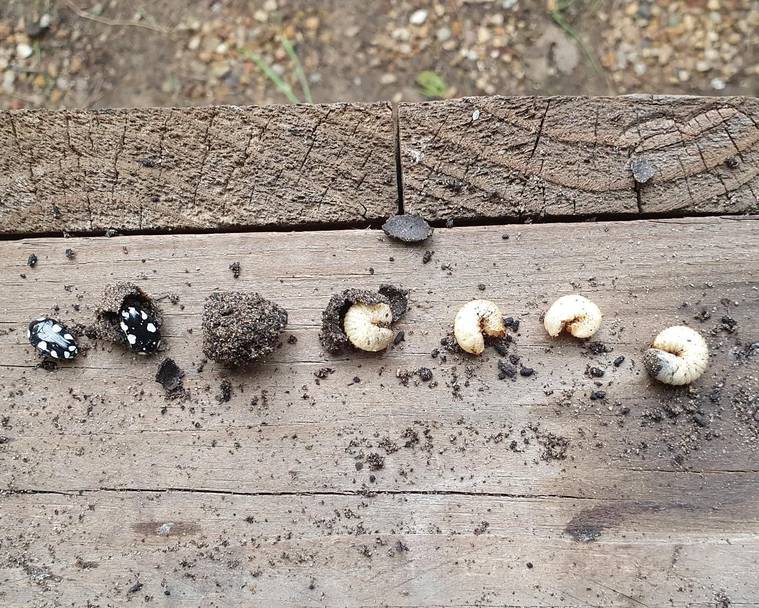 One can see the clear lifecycle from Beetle to Grub of a Fruit Chafer Beetle. Photo by @jbrink 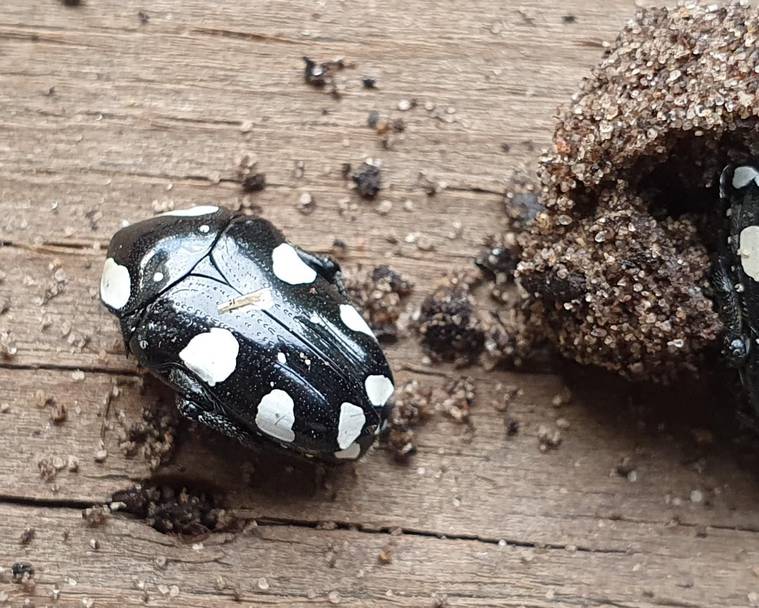 The most common question gardeners would like an answer to is whether these grubs are good for your garden or compost, like earthworms. Grubs do feed on the same food sources that earthworms do i.e. rotting plant material, and therefore you could expect that the excretions of both will be good for compost. However, grubs also feed on plant roots, especially that of seedlings or young plants and are thus not good for your garden. In addition, people sometimes assign signs of damage with plants to other organisms, while these grubs were actually the culprits. Although these grubs are not considered as a significant garden pest, in the agricultural world, some grub species pose major threats to corn in South Africa, including Anomala ustulata and Schizonycha spp. 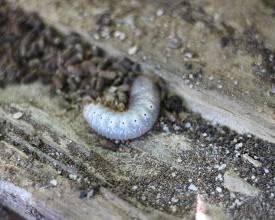 How do I control them?

The Fruit Chafer beetles can be controlled by hanging baited traps, containing sugar water with a sliced banana fruit. It will attract the beetles and they will drown in the sugar water. Karba can be sprayed on flowers, which is a contact insecticide. If you have chickens, they can help to take care of the grubs or garden birds like the hadeda-ibis also feed on these grubs. So the best thing to do is remove them from your soil and then just put them somewhere visible away from the garden for birds to find.
Check out the Insect profile for Scarab Beetles and white grubs: 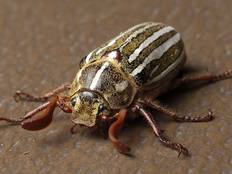 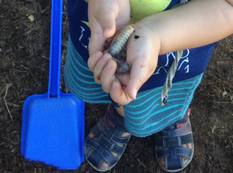 Finding lots of curl grubs in my compost heap ... eish! Luckily I have an eager worm hunter and equally eager consumers! 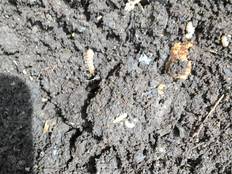 These tiny white grubs are plentiful in my leaf mulch, they develop into small brown worms. What are they & do I need to be concerned putting it in the beds? Thanks @ArneStander 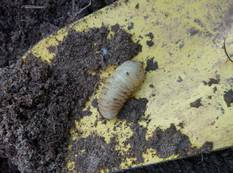 The grub of the fruit chafer beetle, Pachnoda sinuata. Often found in the soil and compost heaps. For more information, look out for the article that will come soon. #insects 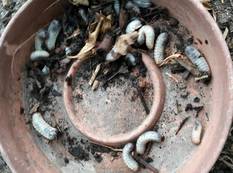 Compost heaps are interesting places. Apart from the various mico organism like fungi & bacteria, insects & their larvae (grubs) help with the break down of the plant litter. The black & yellow garden fruit chafer - Pachnoda sinusta, from the same family : Scarabaeidae of which the dung beetle is a member lay eggs in mature compost heaps. When i turn over the heap or dig a hole in it to place my veg scaps in I always collect as many grubs as possible for the Robins, fly catchers & thrushes. The Hadeda pays a daily visit to the heap as well. 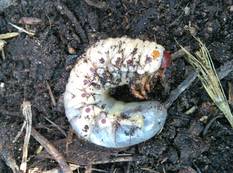 Friend or foe??? Compost heap on large scale and busy putting heap into garden beds. About 10 grubs per square metre(ranging from 5 to 10cm each). I believe they are good for the breakdown of the compost heap but what about live plants and roots??