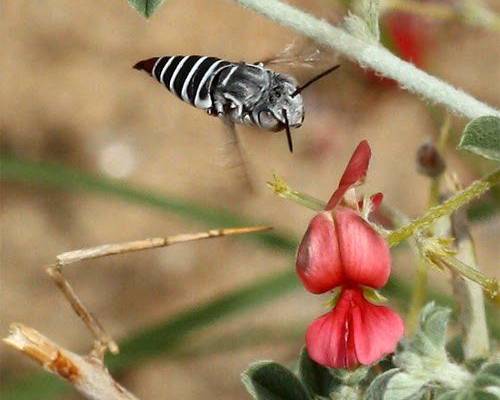 Female pollen-collecting long-tongued bees are easy to put into families. If they carry their pollen under their abdomens they are Megachilidae, if they carry it on their hind legs they are Apidae (discussed in detail in the next article). The problem is with males and cuckoos, and here I do not have an easy solution.
Fidelia (pot bees) are the only megachilids with three submarginal cells. They are mostly quite large and very hairy. Lithurgus (stone bees) are relatively flat with pointed posteriors. They are carpenters and usually found near soft deadwood.

Comb-tailed carder bee taking a nectar meal. Photo by Peter Webb.
Carderbees (Anthidiini) are round black and yellow, black and red/orange or black and white. Resin bees (Osmiini) are mostly small to tiny black and white bees with cylindrical abdomens. Leafcutter bees and mason bees (all Megachile) vary extensively. You’ll need the keys and pictures to get to know the megachilid genera. They look different to the eye but are hard to describe in a few words.

Leafcutterbee carrying pollen under abdomen in combs. Photo by Elize Eveleigh.
There are a host of megachilid cuckoo bees, the anthidine cuckoo, Euaspis (red-tailed cuckoo bee) is a large bee with a black head and thorax and red abdomen; the posterior end of the thorax has a plate that covers the waist. There are several osmiine cuckoos but they are rare and tiny. Megachilini has one cuckoo, Coelioxys (cone cuckoo bee) that has a conical abdomen that is very pointed posteriorly.

Learn more about the secret life of solitary bees in the articles below!

One unique feature suggests a common ancestry and these features are used to define groups, such as families, in nature.

Seasons change from year to year, some being dryer and some hotter than others.

#PolliNationSA | How to separate bees from other flower visitors

Bees closest look-alikes are flies and wasps, which is mainly because many flies and some wasps mimic bees.