We are familiar with the term pollination, where insects such as bees, wasps, flies, butterflies, moths and beetles visit flowers to feed on the pollen and nectar. It's a win-win situation for both plant and pollinator - pollen gets transferred to the stigma (female reproductive organ) and as a reward, the pollinator gets the sweet nectar and pollen.

Bees collect both pollen and nectar as both are crucial for their diet - pollen is rich in proteins and nectar in carbohydrates. Many plants and trees rely on pollinators in order to produce fruits, berries and nuts. We know that without pollination, we won’t have food on our plates. The process of pollination, as described here, sounds quite simple, however, pollination can be a complex ecological function too.

What is buzz pollination?

Buzz pollination, also called sonication, is more complex and the term is a rather good description of the type of pollination. This complex type of pollination is linked to the complex system of the plants. An example is the small shrub, Orphium frutescens, which grows naturally in the fynbos vegetation close to the sea. Pollinators of this plant include carpenter bees, such as the yellow-banded carpenter bee, Xylocopa caffra. This solitary bee species visits the flowers, grasping the anthers and buzz loudly for about two seconds, and then take off. What happened during this two-second period is very interesting. 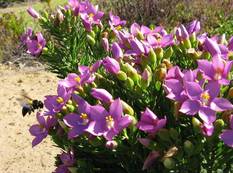 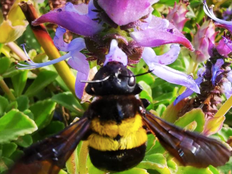 When you look closely at the anthers, you will see that they are twisted and there are two apical pores where pollen is released. The buzzing of the bees, which last about two seconds, is a rapid vibration of the wings which causes the release of the pollen through the apical pores. The pollen lands onto the body of the carpenter bee, which is tightly curled around the anthers. The carpenter bee moves on to the next flower and some of the pollen on the bee’s body is brushed onto the stigma. This leads to the successful pollination in this species.
In addition, the stigma is situated away from the anthers and usually contacts with the bee’s abdomen. This is a common trend in buzz pollinated plants. There are two proposed theories for this trend. Firstly, the flower avoids damage to the stigma when the bee grasps and vibrate the anthers. Secondly, the flower prevents pollen from being transferred from the anthers to the same flower’s stigma, thus avoiding self-pollination and enhancing cross-pollination.

Carpenter bee (Xylocopa caffra) pollinating Plectranthus neochilus. Photo by @andrewkearney1.
Only a small proportion of the pollen collected by the bee is used for pollination. The majority of pollen is the reward and transferred to her hairy hind legs and carried to her nest.
Carpenter bees construct tunnels in dry wood. The pollen is mixed with regurgitated nectar to produce a paste. A large egg is laid onto the pasted and is sealed with a mixture of wood dust and saliva. This process is repeated throughout the tunnel, where each egg is partitioned off from the rest. One can look it at this way: all the eggs share one communal nest, which is the hallowed tunnel. Each egg has its own room, where the larva will emerge and feed on the paste. Pupation will take place and finally, the adult bee will emerge from the tunnel.

There are about 225 000 known flowering plant species, in which approximately 6-8 % is pollinated through buzz pollination. This pollination is very successful and could be due to the fact that the typically large yellow anthers always look favourable to pollinators, thus bees will continue to visit the flowers, pollinate them, even if most of the pollen has been buzzed out of the anthers. Furthermore, most plants have exposed pollen which can be collected by any visiting pollinator. In the case of buzz pollination, only the legitimate pollinator, in this case, the carpenter bee, can create the buzz in order to release most of the pollen through the apical pores. Pollen theft is also common - this means bees collect pollen but do not necessarily pollinate the flower.

Honeybee side-stepping the anthers and taking a shortcut to the nectar at the end of the flower tube.
Orphium frutescens minimalize the pollen theft, enhancing pollination which occurs through the buzzing of the carpenter bees. There are other plants which also rely on buzz pollination, including plants of the genera Harveya (family Scrophulariaceae) and Roridula (family Roridulaceae). Even the flowers of the cultivated tomato plant, Lycopersicon esculentum, are buzz pollinated by Xylocopa caffra. Buzz pollination even occurs in several ericaceous (Ericaceae) species, which forms part of the fynbos.

Carpenter bee pollinating Pycnostachys urticifolia. Photo by @veggieman.
Pollination is an interesting world of its own and not as simple as we used to think. Keep an eye out for the big yellow-banded carpenter bees, which are frequently seen in gardens.
Free download for your phone or tablet

Bees are one of the most important pollinator species in the world and as gardeners, it is our responsibility to provide a... 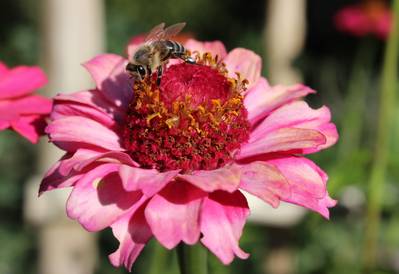 Today on Workers Day we take a look at the most hard-working creatures on the planet - worker honeybees.