#PolliNationSA | The other long-tongued bees 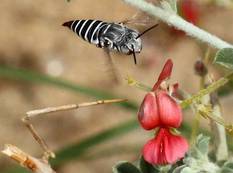 The females of long-tongued bees are easy to identify - if they carry their pollen under their abdomens they are Megachilidae, if they carry it on their hind legs they are Apidae.
Apidae always carry their pollen on the hind legs, but they have either two or three submarginal cells and there are many cuckoo bees, a robber bee (Cleptotrigona - parasitic stingless bee) and a few social parasites (Allodapula - flat-tailed stem bee; Braunsapis - common stem bee, Eucondylops – knob-headed cuckoo bees, Nasutapis – Pinocchio cuckoo bees). There are many genera and within groups they often differ much. Therefore, to get to know the genera you are going to have to use the keys and consult Lynn's poster.
Carpenters include the large carpenter bees (Xylocopa) that are well known and they are not bumblebees. Xylocopids are solitary, sometimes with social associations between female siblings. Bumblebees do not occur in Africa south of the Sahara and they are social. Large carpenter bees are good buzz pollinators, i.e., pollinators of your Solanaceae, including tomato and eggplant, as well as granadilla.
Small carpenter bees, Ceratina and the stem bees (Allodape, Allodapula, Baraunsapis and Compsomelissa), are small bees that vary in colour and shape and are often found nesting in the pithy stems of Protea, inflorescence stems of Aloe and Watsonia, and in thatch.
There are a number of cuckoo bee genera in the tribe Nomiini, one of which (Ammobatiodes – stalker cuckoo bee) is so rare it is only known from three specimens; all females.
The oil collecting bee, Ctenoplectra (squash oil bee) collects oil between specially hairs under the abdomen. They most commonly occur on Momordica in Limpopo, Mpumalanga and northern Kwazulu-Natal. It has its own, closely related cuckoo, Ctenoplectrina (squash cuckoo bee). 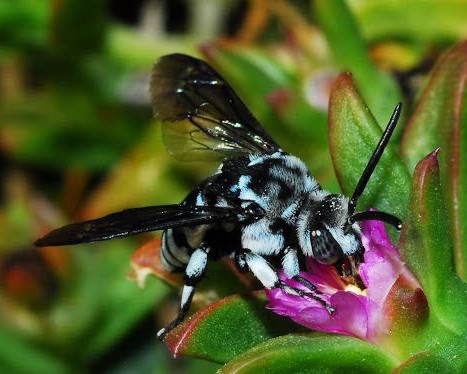 Neoncuckoobee taking a nectar meal. Photo by Peter Wagg.
The miner bees include the long-horned bees and the anthophorine bees. These are among the most conspicuous, hardworking bees that one sees in your gardens. Amegilla (banded digger bee) generally being the most common. They are the common buzz pollinators that visit your tomato flowers. Their cuckoo is the neon cuckoo bee (Thyreus) They are the beautify powder blue bees and frequently are seen where there are lots of banded miner bees.
Honeybees and stingless bees are social, pollen-collecting bees whose pollen carrying structure resembles a spoon rather than a brush, comb or basket, except the parasitic stingless bee (Cleptotrigona) that robs other stingless bees and does not carry pollen from flowers. I assume that they carry the hosts provisions in their crops because they do not have a pollen carrying structure. 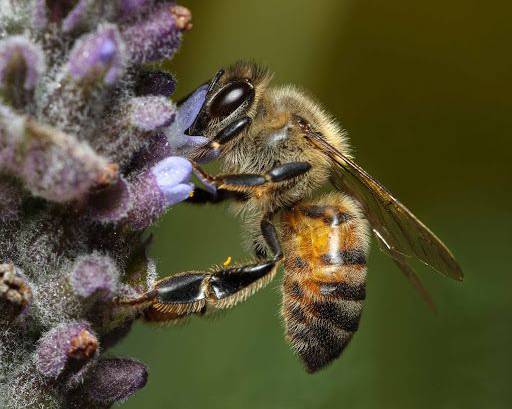 Learn more about the secret life of solitary bees in the articles below!

In the previous instalment of the #PolliNationSA series, we looked at the diversity of short-tongued bees. If you haven't read...

One unique feature suggests a common ancestry and these features are used to define groups, such as families, in nature.