Pruning, like feeding and watering, is a necessary part of caring for your plants. Pruning can be daunting at first but with the right tools and basic plant knowledge, you’ll be well on your way to becoming a pruning pro. But, before we talk about pruning tools and how to prune which plants, it’s important to know a few basic pruning terms.

For pruning beginners and experts alike, here are a few pruning terms to add to your gardening glossary:

A shoot that has developed to maturity and has passed through one or more dormant seasons, usually originates from the main trunk.

A small swelling right where the branch meets the trunk area. This tissue contains specialised cells that aid in wound healing and protection against disease.

A small dormant growth on the tip of a shoot that will develop into a leaf, flower or shoot.

The uppermost branches of the tree, also referred to as 'crown'.

The angle developed between two connecting shoots or branches.

Removing young vegetative shoots from a tree or shrub during the growing season to improve the framework of the plant.

Removing dormant buds. This is often done in the case of young, newly planted trees during the selection of buds for the formation of scaffold branches.

Cutting away a portion of the terminal growth of an upright or lateral branch, often reducing the size of the tree. Heading back stimulates new growth that emerges from the buds below the cut and often retards terminal growth of the plant.

The area of stem between nodes.

The vertical stem at the top of a trunk terminal leader of a tree, in most cases it is the trunk. A tree or shrub can also have more than one leader i.e. a multiple leader tree.

Removing the lowest branches from a mature tree to raise the canopy and increase available light.

The point of attachment of one or more buds from which leaves or branches emerge.

Branches that have produced fruit for a number of years, generally for more than 5 or 6 years.

A term generally used in the dormant season - the wood of branches produced by the previous season’s growth.

Removing the growing tip of a plant to encourage bushy growth and stimulate more blooms.

The primary limbs that form the basic framework of a tree or shrub, primarily arising directly from the main trunk.

Cutting back numerous stem tips across a smooth plane, usually to shape a shrub or hedge and promote bushy growth. Shearing is usually done two or more times during the growing season, depending on the plant.

A young branch or sucker sprouting from the main trunk and is vegetatively produced from a dormant bud.

A vigorous shoot originating from root or stem tissue below ground.

Removing shoots or limbs right to the trunk or another main branch, for the purposes of permitting greater light and spray penetration into all areas of the plant. This type of pruning does not stimulate plant growth, but takes out older growth or interfering and unneeded branches.

A drastic cutting back of large branches on a mature tree, a detrimental tree practice that is not encouraged as it leads to decay and structural weakness.

The main woody stem of a tree, up to the first main scaffold branch.

Vigorous, succulent shoots arising from larger branches of a tree, often produced in large numbers just below a pruning cut.

The cut surface remaining on the plant where a branch has been removed by pruning.

A substance applied on wounds to protect exposed plant tissues from fungal or bacterial infection.

To grow your pruning knowledge, dig into the related articles below! 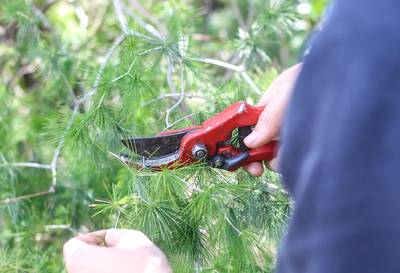 Winter pruning done correctly maintains and improves the long-term health and beauty of a tree or shrub and will create a...

Which pruning tool should I use?

You don’t need many tools for normal garden pruning but selecting quality ones that last longer and make clean cuts, is a...

How to prune roses

July is the best time to prune roses in most parts of the country.