Hoverflies - The 'wannabees' in the garden As a gardener, you would know that bees are your friends as they pollinate flowers to form seeds, berries and fruit which you and your neighbours can enjoy. It is also quite fascinating to observe bees visiting your garden, floating from one flower to another. Pollination is not only limited to bees and there are various other insects that provide this irreplaceable service like flies, wasps, butterflies, moths and beetles.
Flies are often overlooked when it comes to pollination and can often be mistaken for bees. Have you ever noticed a bee-mimicking fly in your garden? Bee-mimicking flies tend to look like bees but are in fact true flies. They have only one pair of wings, compared to bees having two pairs of wings. The second pair of wings are reduced to small structures, known as halters, which are essential for balance. The antennae of these flies are quite reduced and not as prominent as bee antennae, however, the striped abdomens of these flies can surely result in confusion.
Hoverflies are a common flower-visitor in your garden. They are called hoverflies because they have the ability to hover in the air, much like a helicopter. You will notice this easily when they are visiting flowers. Three species commonly found in the garden include Allograpta fuscotibialis, Eristalinus taeniops and Eristalis tenax. All three species belong to the Syrphidae family. 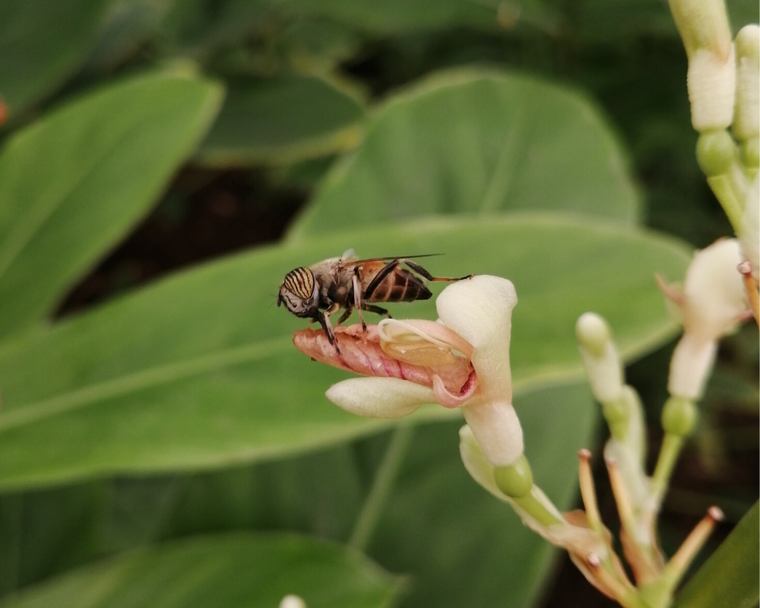 Eristalinus taeniops
The above species is Eristalinus taeniops, a typical bee-mimic. You can see the abdomen is more bee-like, in terms of colour and size. Very conspicuous is the stripy big eyes. This is an indication that it is indeed not a bee. The short antennae pointing downwards are also an indication that it is not a bee. Honeybees have typical elbow-shaped antennae, which can be easily seen. They are commonly found on flat white or yellow flowers.

Eristalis tenax
Lastly, you will find Eristalis tenax, also known as the drone fly. It looks quite similar to Eristalinus taeniops, but the difference is mainly in the eyes. The eyes are marbled as opposed to striped. The thorax of Eristalis tenax is also slightly darker. They are often seen on the flowers of carrots and fennel. This looks like a typical drone honeybee. Drone honeybees are the males that are much larger than the worker bees, also with much bigger eyes. The flies of drone bees look fly-like, and therefore this species of fly can easily be misidentified.
Now the question on everyone's mind: Why are there flies which imitate the appearances of honeybees? Well, it is simply to avoid attention from predators. These flies don’t have stingers like honeybees do. Therefore, these flies will be a much easier prey for predators. By mimicking honeybees, it allows them to fly around with less attention because, to predators, they look like fierce stinging honeybees.
Try to look more carefully in your garden around flowers to spot them. You have probably spotted them before and thought that they were bees. Now you can try and identify them and tell them apart from honeybees.

Candide recently launched the #PollinationSA movement which encourages all South Africans to plant bee-friendly plants to... Today on Workers Day we take a look at the most hard-working creatures on the planet - worker honeybees.

Bees are one of the most important pollinator species in the world and as gardeners, it is our responsibility to provide a...