Types of mulches for roses

Mulching is often mentioned in passing when talking about rose care but that doesn’t mean it is not important.

It is one of the cornerstones of water-wise gardening, because mulching under plants keeps the beds cool, which reduces evaporation and allows the ground to remain moist for longer, conserving water. As a secondary aspect one can use an organic mulch as a soil conditioning compost the following winter.

Traditionally mulch was half-rotten straw that was spread on the ground to protect the roots of shrubs and trees. Today almost any organic material is used such as pine needles, peanut shells, bark chips, Macadamia nutshells and a mixture of grass cuttings and leaves. A light-coloured mulch reflects the light and heat away from the plants.

Broken peach pips
Paving stones, slate slabs, and bricks are also suitable, and they can be placed in such a fashion to create very important small contours in sloped beds. The conditions under such inorganic material are mostly ideal – well aerated with an even moisture and an even temperature and the roots will grow upwards to make good use of it.

Arctotis as a living mulch
But there is also ‘living mulch’, which has the same effect but adds other dimensions of colour, texture, and even fragrance to the rose bed. Living mulch is simply any suitable groundcover plant that spreads over the surface of the bed and keeps the soil shaded and moist.
Examples of living mulch: 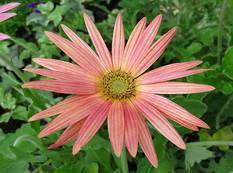 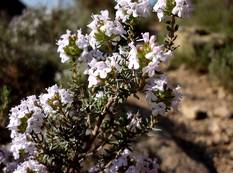 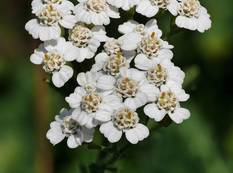 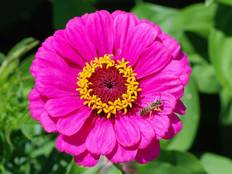 To learn more about rosy companions, tap the article below.

A note of caution: With dense under-plantings of groundcovers in rose beds, the roses need more than the normal watering. That is because the dense roots of the underplantings sucked up any water before it could get to the roots of the roses. Normally, a rose needs about 15litres per square metre, but in this case, the amount of water should be increased so that there is enough water for everything. It would also help if space was cleared around the stems of the standards so that the water can go straight to the rose roots.
When to mulch:
By August the soil is warming up and it is time to mulch. Renew the mulch throughout the season as it breaks down.
How to mulch:
Don’t make the layer too thick, otherwise, water will not penetrate. It can be 2cm – 5cm thick. Don’t push the mulch up against the stems of the rose. Keep a gap open around the stem (like the centre of a ring doughnut) so that water and fertiliser can penetrate.

Formal rose gardens are lovely, but they are not to everyone’s taste. If you like your garden full of flowers, including...

Mulching is the number one priority in the garden, especially during the hot summer months and dry spells. Mulching is one of...