#PolliNationSA | Do all bees sting?

The sting of a bee is a modified ovipositor (its egg-laying structure), therefore, only female bees sting.

Mopani bee carrying its pollen in the same way as they honey bee - Elize Eveleigh
Bees evolved from wasps who use their stings to immobilize prey, and for defence. For bees, it is only a defence organ. Social animals have a greater need for defence because they need to defend their nests, than that of solitary ones. Therefore, honeybees and social wasps (paper wasps) are the most aggressive and tend to have the most painful stings for their sizes.

In honeybees, the sting is barbed, which leads to the bee sacrificing its life, and a more painful sting. There are exceptions worth mentioning. There are stingless bees and they occur in the hotter, northern and north-eastern parts of South Africa. These bees are social and, therefore, have a nest full of honey. So it is a mystery as to why they lost such a useful, protective organ like the sting. But they do seem to manage very well without a sting. Solitary bees and all wasps do not die when they sting. 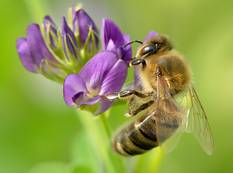 Honeybees also use their sting against other honeybees when fighting over a resource. I saw hundreds of dead honeybees when sugar water had been put between two hives that were fairly close together. I'm not a beekeeper but understand that when bees are aggressive to one another they are also aggressive to people and other animals. So my advice is don’t keep bees, or remove unwanted nests unless you know what you are doing. Have a look at the article below for people to contact to safely remove nests that will not harm the bees. Pollen collecting bees possibly sting cuckoo bees because cuckoos are often well armoured by their exoskeletons being thicker and having armoured plated. I have not seen cuckoos being attacked nor have I read anything about this, but it seems obvious.

Large Carpenter Bee by Peter Webb
Large carpenter bees, presumably because of their size, give a nasty sting. They don’t attack one but do sting if you put a finger over their nest entrances – so be careful when collecting wood. On the other hand, the small carpenter bees, Ceratina, give a pretty nasty sting for their size.
“

The best advice that I can give concerning bee stings is that honeybees are dangerous animals and to stay away from their hives unless you know what you are doing and have the appropriate protective clothing.

Other bees only sting if you catch them or put your finger over their nest entrances. Their stings are not particularly painful, but if you are allergic you may still suffer from an allergic reaction.

Are you part of #PolliNationSA yet?

#PolliNationSA | Bee in the know with Connal Eardley

During #PolliNationSA we’ll learn that there are many different types of bees in South Africa.

#PolliNationSA | Why are bees so important?

Most flowering plants require an animal pollinator (bees are little animals), and the plants from which we harvest our food...