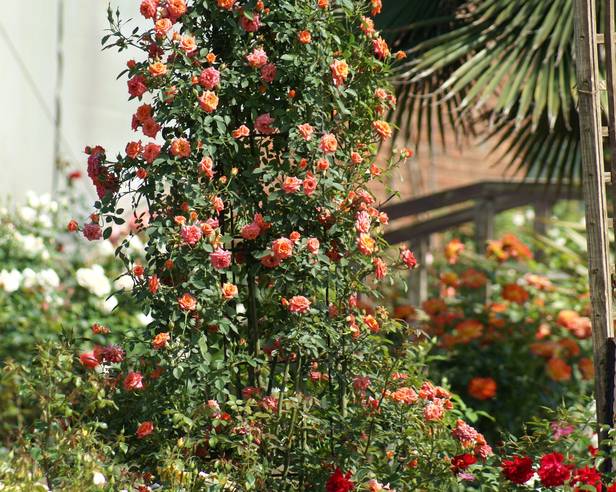 How to prune Climbing Roses, including Panarosas, is determined by what is expected of them; whether they are spread out on a fence, are growing up pillars or covering arches and pergolas. For the very best flowering in October it is best to loosen or cut any ties, then pull and spread the long canes apart. Cut out at the base any stems that did not show signs of good growth last season.
The remaining long canes are then espaliered by tying them in a V shape on to high walls or similar structures. On lower structures the canes are drawn out horizontally to both sides, spaced about 50cm apart and secured.
On pillars they are spiralled which brings about flowering at every curve.
Panarosas are selected to have a shrubby spreading growth without the very long climbing canes. Pruning entails cutting away obvious dense stems and twigs allowing the main branches to remain, but shortening the previous season’s stems to three to four eyes.
To read more about pruning roses, tap on the article below.

If you would like to see Ludwig prune climbing roses, watch the video below.

Every gardener is different and wants different things, which means there is no right or wrong way to prune roses.

Roses can end up in the wrong place for several reasons. It could be that trees are casting too much shade, nearby shrubs...

How to prune roses

July is the best time to prune roses in most parts of the country.