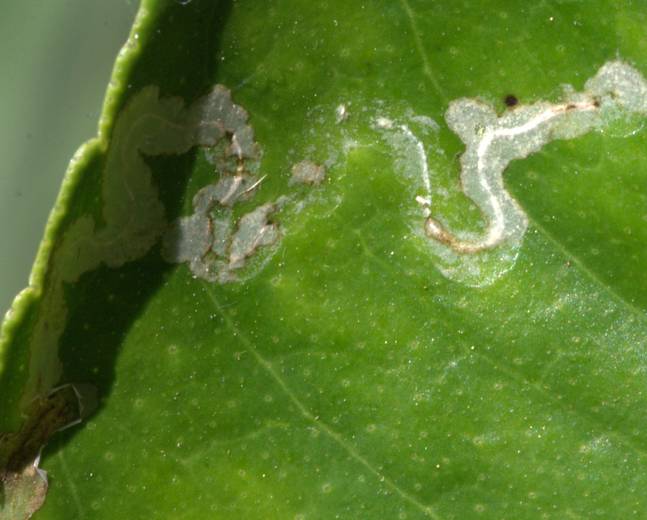 Phyllocnistis citrella, the Citrus Leaf Miner (CLM), is a micro moth in the insect family Gracillariidae. Gracillariidae comprises the smaller moths with leaf mining larvae who are of agricultural and economic significance. These moths can be difficult to control because they're protected from contact insecticides while developing inside the plant. Luckily, they don't damage the crop, but younger plants are at most risk.
Free download for your phone or tablet

Larvae can damage foliage from mining.

These insects possess a selection of natural enemies to help keep them under control.

Adult: Moths are small insects (wingspan: 5mm). They're seldom seen, but possess white-silver wing scales, which form small feathery, tufts at the posterior end of the wings. Under a lens, it's possible to observe some grey and cream streaks on the lateral area of the wings. Leaf mines and larvae: The tunnels act as a signature, and they're your best chance at identifying what's inside the plant. In the case of CLM, mines can cross the central leaf vein. The mines begin light brown/yellow, eventually drying out and fading to a silvery-white. Tunnels typically merge forming large, irregular silver-white patches on the leaf. It's possible to see meandering black lines in the centre of the mines, and this is insect excrement. You can see where the insect has been boring in the leaf by observing the trails of faeces! Sometimes, it's also possible to see a plump, yellow grub in the leaf mines.

Mines are the easiest symptom to spot. Citrus leaf miner mines are filled with light-brown-yellowish frass (insect faeces), this eventually turns into black meandering lines. Leaves display a sliver-white and unpredictable trail. This is where the insect has been eating the leaf inner tissues. Foliage can begin to curl and look distorted. Curling of leaves is a good indication that the larvae are big enough to pupate. Curling leaves protect the moth as it develops into the final form.

Originates in Asia but now has a worldwide distribution.

Generally speaking, good plant care will give plants a better chance of survival. Rapid new growth is unfavourable for insect mining. If appropriate, treat your plant to some feeds and irrigation during the growth period. A fine, mesh netting may be a good call if you have young plants. If infested, it's always good to start any treatments by pruning off mined leaves. Make sure they're disposed of sensibly so that they can't reinfest plants. Make sure to pick up any leaves that have fallen to the floor. If leaves have curled, pick them off and give them a good stomp! Attract beneficial insects into your own green spaces by planting an array of indigenous plants, incorporating bug hotels, or just by letting some areas grow a little wild! Hanging baskets and living walls are an excellent way to get the good guys into your garden. Organic pesticides (containing pyrethrums; pyrethrins) or any horticultural oil are natural and are less-persistent in the environment. This can still affect the development of the useful insects (like bees and beetles!), so take care not to spray flowers. Pesticides containing Spinosad can also be advantageous. They may require application intervals.

These insects only become severe if you're a smallholder or professional grower. In these circumstances, chemical action might need to be taken. If a chemical option is sought, check with your local garden centre or supplier and please take care to follow instructions. Check with your local regulating body for guidance on active ingredients and their authorisation for use. Pesticides containing imidacloprid applied as a soil drench is recommended for larger plantations, however, should not be used during or before blooms. This chemical is banned from use in the EU. If intending to eat the crop, please make sure to check that your plant is approved for the treatment, taking care to follow quantity guidance.

These insects will feed on most citrus plants, but they particularly favour bitter fruits such as grapefruit, lemons and limes. 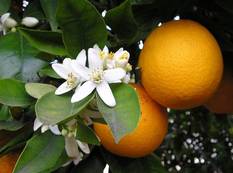