If you live in the southern U.S. and you aren’t growing Oxblood Lilies (Rhodophiala bifida), you should be. Harbingers of autumn, Oxblood Lilies spring up in a sudden dash of red after the first good rain of late summer soaks the soil. Masses of them will stop traffic. The blazing red pennants of this early fall-blooming heirloom bulb can be seen brightening driveway verges, tree circles, and foundation beds of old homesteads throughout the South (zones 7-10), flowering with abandon decades after the original gardener moved on. While the show lasts only about a week, their arrival is treasured among Southerners as a sign that fall is really and truly right around the corner after a long, hot summer. 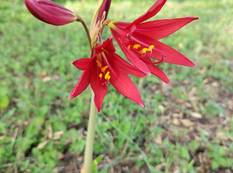 Standing 12 inches tall, Oxblood Lily’s rich red trumpets seem almost outsized atop naked green stems. Their butter-yellow anthers (the pollen-bearing flower part) add a contrasting accent color to the fiery display. Pair the bulbs with low-profile foliage plants that have yellow or cream-colored variegation in their leaves, like ‘Sparkler’ sedge or ‘Bright Edge’ yucca, to make that yellow pop. Their diminutive size makes them a great front-of-the-border seasonal flower, and they also look lovely planted in clusters in a low groundcover like sedge or dwarf mondo grass.

Native to Argentina, Oxblood Lilies were introduced to Texas in the 1800s by German immigrants in South America, who brought the bulbs with them when they resettled in the Texas Hill Country. From there the bulbs were passed from gardener to gardener throughout the South, where they’ve adapted well to the region’s sauna-like summers and mild winters. Hiding underground through the hot summer months, they pop up with the first refreshing rains of autumn. Their cheerful reemergence in September, when the school year traditionally started, earned them the common name schoolhouse lily. In coastal regions they’re sometimes known as hurricane lily for their appearance during hurricane season.
Plant Oxblood Lily bulbs three inches deep, or three times the height of the bulb, in soil with good drainage. While adaptable, they don’t like soil that stays wet. A morning-sun spot with afternoon shade is best, keeping the flowers from fading quickly on hot late-summer days, but they’ll accept conditions ranging from full sun to dappled shade. Once established, they don’t need any particular care, and dry summers won’t faze them. They appreciate mild, moist winters.

If you can, plant them in spring so that they can become established before fall. But Oxblood Lily is forgiving and can be planted pretty much any time of year. Unlike fussier bulbs, Oxblood Lily doesn’t require dividing every few years to keep blooming either. Left to its own devices it’ll expand readily on its own when conditions are right. But you can hurry the process along by dividing bulbs after flowering ends and through winter. The strappy green leaves that emerge when flowers fade mark the bulb’s location for a few months before these too fade away in spring. Replant at the same depth and let the green leaves remain, for they provide energy for the bulb to grow.
Fall seems a long way off right now. But plan ahead for rich fall color and give Oxblood Lily a try. Search out the bulbs online at Southern Bulb Co. and other specialty bulb suppliers, or ask a neighbor who’s growing them for a few the next time they divide some. You’ll be delighted to see those red trumpets unfurl come autumn.

You’ve planted your tomatoes and the tiny yellow flowers are starting to show. Now what? Taking a little care during the hot... 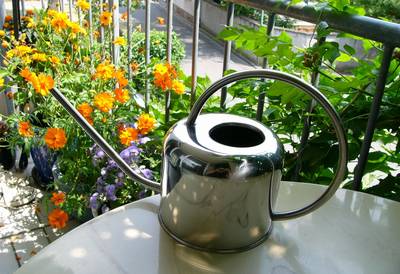 When to Water Your Plants

Beginners behold! If you're looking for answers on when or how often you should be watering your houseplants, you're in the...

Candide recently launched the #PollinationSA movement which encourages all South Africans to plant bee-friendly plants to...