You may be surprised to hear that plants actually have no names! Botanical Latin is a strictly human invention, and therefore subject to change as our study of individual characteristics becomes more and more detailed. From our knowledge of leaves and flowers to the unique biochemical products and DNA sequences of genes, the science of botany is always advancing.
Plant names are essential to Candide, our knowledge base, and of course, our users. To many, plant names are sometimes nothing more than an obstacle blocking the way to botanical intimacy. It may seem that they hinder and complicate our progress as gardeners, but plants are given names as a convenient form of identification and reference.
Centuries ago, plants were known by long and unwieldy descriptive sentences. Caspar Bauhin (1560–1624) described a plan of adopting two names per plant, but it wasn’t until the great Swedish naturalist, Carl Linnaeus (1707–1778), that a more complete methodical classification and uniform naming system was devised. Behold the birth of plant taxonomy!

Carl Linnaeus (1707–1778), also known as Carl von Linné, often called the Father of Taxonomy. Oil on canvas, Gripsholm Castle, 1775.
Of the two names given to a plant, the first is the genus to which the plant belongs (e.g. Clivia). This can be likened to our surname and indicates the plant’s relationship to others. This generic name is a singular, Latinised noun, always capitalised. The second part, the specific epithet, is often an adjective and written in lowercase (e.g. miniata). It is only given to one plant species in a genus, much like a Christian name.
Together these constitute the name of the species and are either written in italics (or underlined). Often proceeding the species is an initial (L. = Linneaus) or other shortened abbreviation of a person to whom the plant’s name is attributed. Initials are written in roman characters and not italicised or underlined.
Within Candide, you may see the abbreviation 'sp.' (singular), or sometimes 'spp.' (species pluralis, Latin for multiple species). This is used when a plant belongs to a particular genus, but the exact species is not stated or identified. For example:

The richly-coloured floral diversity of Pelargonium spp. (Geraniaceae). a) Pelargonium abrotanifolium; b) P. grandiflorum; c) P. caylae; d) P. fulgidum. All photos by 阿橋 HQ (CC BY-SA 2.0).
Genera and species are low positions in the taxonomic hierarchy. Variations within a species have prompted taxonomists to divide them into smaller groups:
Larger group classifications include:

The hierarchy of the plant taxonomic classification system. Image from Discover Biology (3rd Edition) by Cain et al. © W.W. Norton & Company Inc., 2006.
In recent years, an attempt has been made to change some of the older family names (Compositae, Cruciferae, Gramineae) to names ending in -aceae (Asteraceae, Brassicaceae, Poaceae) for consistency.
Therefore throughout our app, we try to use the most up-to-date taxonomy in our database, so don’t be put off if you see new and unfamiliar names for your old plants.
Shakespeare wrote, 'What's in a name? That which we call a rose by any other name would smell as sweet' ... well, in Candide, a plant’s name is everything!

If you read my previous article about variegated plants, you will be caught up on why they are so special and different. If...

Variegated Plants: What's the Big Deal and Why Are They So Expensive

It's truly wonderful how many people are getting interested in plants and wanting to learn more about caring for them. No... 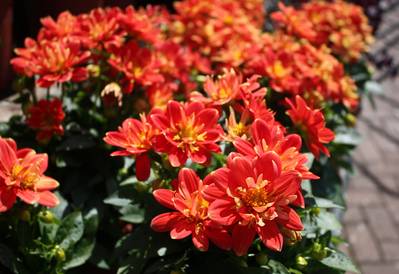 August is holiday time but also a time to propagate plants. The first new batch of bulbs will arrive in garden centres, and...