By Bradford Council’s admission, the district lags behind the national average on tree cover. But local woodland authorities are now planning an ambitious project to rectify this and help combat carbon emissions in the process. The plan is 20,000 new trees.
The West Yorkshire district council has identified 13 locations for a mixture of whips and standard size plants. With approximately a year set aside to achieve the woodland aims, the initiative is the biggest tree scheme the council has undertaken in almost ten years.
Areas that could take a share of 20,341 trees include Worth Valley, Silsden Park, Legrams Recreation Ground and Marley Orchard in Keighley. One of the experts tasked with leading the push for more trees is the council’s Senior Parks and Green Spaces Manager Bob Thorp.

At the moment, Bradford has between five and eight per cent tree cover. That’s behind the national average of 16 per cent reported by the government Forest Research agency. Thorp explained that the council would like to see that percentage rise and contribute to the Woodland Trust’s Northern Forest.
‘The council recognized that it has less tree cover than the national average and that it could probably benefit from having more trees and woodlands in the district,’ Thorp told Candide. He said the strategy is also a contribution to achieving net-zero carbon as part of the climate emergency response.

Planting trees is certainly a green endeavour. It’s a pursuit that to the casual observer appears in no way troublesome for the environment. But forestry does have its drawbacks. Plastic still plays a major role in building trees up from saplings to towering trunks.
Many sapling guards or tree shelters are made from plastic. The tubes cover the base of young trees, providing them with early protection from predators and herbicides. But in some cases, they can be forgotten about or damaged, with the potential for tiny plastic pieces to leach into soil or groundwater.
Thorp says that plastic usage is something that he’d like to move away from. ‘If you look at modern planting schemes you will just see a forest of plastic tubes with softwood stakes attached to put the trees in.
‘We are trying to develop planting methods that get away from single-use plastic because they are difficult to recycle and they are labour intensive to reuse.
‘The purpose of the tree tube is to prevent trees being eaten by rabbits or deer. But for every tree with a tube, we could plant three trees without a tube.
‘The idea is that we would do what is called sacrificial planting, meaning planting areas with the expectation that we will lose a certain percentage to natural elimination.'

With planting methods considered and tweaked, identifying free space in which to house new trees is quite a challenge. Intriguingly, Bradford Council has something of a limited canvass on which to work, due to the way land has been parcelled up by building and the general development of the area.
When it comes down to it, the tree business could almost be described as a game of percentages ‘If you look at an area like Bradford, the tree planting opportunities are actually quite small,’ Thorp says.
‘Bradford Council has only got a limited landholding. Most of the land in the district is in private ownership. In fact, 42 per cent of the district is pasture: it is either being grazed directly or being grown for grass crop.
‘About 26 per cent of the district is urban and built up; it’s got roads on it, buildings and train tracks. So you can almost discount that because you’re not going to get many trees in there that are going to make a great difference.’

Thorp says local farmers will be allowed to get involved should they wish to adopt a few trees. The woodland manager believes pastures could be key to pushing up the area’s forest levels.
‘About 16 per cent of the area is moorland and peat bog which is globally recognized as an important habitat. Per hectare, it is capable of storing more carbon than woodland is. So you kind of need to almost take that 16 per cent out of the equation as well.
‘We’ve probably got about 8 per cent coverage of trees. So when you look at that 42 per cent of pasture you’ve got to be looking at planting trees in that grassland.
He added: ‘We’re asking if there are any landowners who want to come forward to put some more trees on their land.’
Known as agroforestry, the mixing of trees and pasture could benefit the area.
For one, a more complex habitat of grass and woodland can improve biodiversity. Meanwhile, providing ground cover is considered to be a good way to stabilize soils, stop erosion and prevent flooding risks.
The 20,000 tree strategy for Bradford is due to begin taking shape at the end of November, with planting expected to continue right through until March 2020.
‘We plant bare-root trees not pot grown trees because they are light and easy to move, Thorp says. ‘The winter months are the time to plant.’
It’s hoped that when completed, the initiative will help make a small dent in the Northern Forest project, a scheme to transform areas between Hull and Liverpool, and up to Lancaster with 50 million trees. 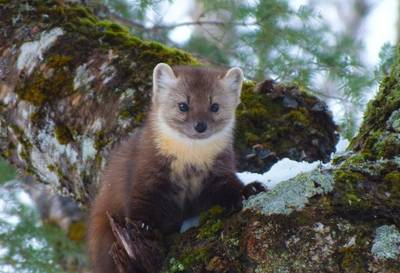