George Forrest (1873–1932) was a robust man who loved the great outdoors, both perfect attributes for a career as a plant hunter.
During seven expeditions to China over 28 years, mainly to the province of Yunnan, he collected 1200 new species. These included 509 rhododendrons, over 50 primulas and 1,000’s of seeds.
After leaving school, Forrest worked in a chemist's shop, where he was introduced to medical botany. He then met the keeper of the herbarium at the Royal Botanic Garden in Edinburgh, Sir Isaac Bayley Balfour, who offered him a job. 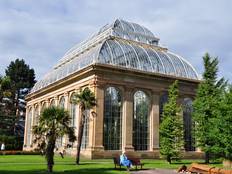 The Botanics captures the imagination of everyone who visits and is world renowned for its horticultural excellence. Over 70 acres of beautifully landscaped grounds provide a tranquil haven just one mile from the city centre.

Sir Isaac Bayley Balfour totally transformed the Royal Botanic Garden Edinburgh during his time as Regius Keeper
He walked six miles to work every day, stood while working, then walked home again. Sir Isaac noted this idiosyncrasy. So when AK Bulley, a wealthy Liverpool cotton broker, asked Balfour to recommend someone to collect plants in the mountains of Yunnan, he unhesitatingly recommended Forrest.
‘The head of the herbarium speaks very highly of him. He is a strongly built fellow and seems to be of the right grit for a collector’ he wrote. His first expedition amply illustrated that fact.
In July 1905, on an expedition to Yunnan, Forrest who had been lodging at a Catholic mission, fled with the occupants just before they were attacked by Lamas during the 1905 Tibetan rebellion.

Yunnan is the most biodiverse province in China
During the ambush, Forrest raced down a narrow track, rounded a corner and, momentarily obscured from his pursuers, leapt from the path, tumbled several hundred feet down the slope and hid. An account of his subsequent escape was published in various botanical publications.
The first night, in an attempt to escape, he climbed to 2000’ where it was ‘very steep, precipitous in parts...the footing was so precarious, it took me nearly five hours to gain the summit’. When he did, a line of sentries prevented his escape, so he climbed back down and spent the day ‘hiding in a hollow under a rock’.

Many areas of Yunnan are treacherous
The second evening, on realising the lamas were following his boot prints, he buried his boots, ‘descended to the stream, entered the water and waded ...for nearly a mile’, taking the utmost care when he got out ‘to leave no track’ before continuing barefoot. The journey took all night.
Throughout his ordeal, it rained heavily. His account reads, ‘By the end of eight days I must have presented a most hideous spectacle. Clothes hanging in rags, covered in mud, almost minus breeches, face and hands scarred and scratched with fighting my way through scrub in the dark, feet ditto and swollen almost beyond recognition, shaggy black beard and moustache, and, I have no doubt, a most terrified, hungry and hunted expression on my countenance’.
Forrest finally gave himself up at a nearby village with only strength to murmur ‘tsampa’ (salted flour mixed with Tibetan butter tea) before collapsing. Fortunately, he had fallen amongst the Lissu, the local and friendly indigenous people. They managed to smuggle Forrest out of the region by disguising him as a Tibetan.

Forrest found safety in the hands of missionaries after what he referred to on the back of the photo as his ‘fun up North’, August 1905.
His account reads: 'How I scraped through all the hardships I cannot tell… The flowers I saw were really magnificent, in fact, so fine were they, that I have decided to run the risk of going back next year if Mr Bulley gives his consent to the arrangement.'
Those mountains have, rightly in my opinion, been termed the flower garden of the world. However I had no time to waste on them then, and beyond collecting a few scraps of those which I took to be the most uncommon, and transferring them to my pocketbook, I could do nothing.'
'There were several species of Meconopsis, (Himalayan poppies) all of them surpassingly lovely, acres of primulas, of which I noted nearly a dozen species in flower, ditto rhododendrons, many of which I had never seen before, and which may probably be new species, besides numberless other flowers.’ 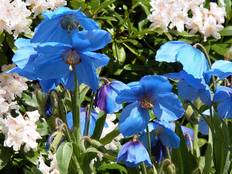 His courage to return paid off. Forrest collected many iconic plants during subsequent trips to the region.
These included Gentiana sino-ornata, from the summit of the Mi Chang Pass. He also introducedCamellia saluensis, which was crossed with Camellia japonica by JC Williams at Caerhays Estate, Cornwall - the first of many Camellia x williamsii hybrids. 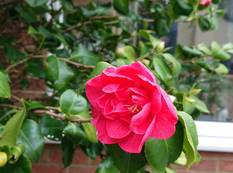 Another of his introductions, Cerise pink Rhododendron griersonianum, became the parent of over one hundred and fifty hybrids; almost one third receiving AGM or First Class Certificate from the RHS.
Among the many Primulas was one, ‘named in honour of Mr A K Bulley of Ness, Neston, Cheshire for whom I collected’; Bulley was so pleased with the plant he would introduce himself ‘I am Primula bulleyana’.

Primula bulleyana
On 5th January 1932, Forrest died of a heart attack at the end of what he intended to be his last expedition and is buried in a small graveyard at Tengyueh, in west Yunnan, among the plants and scenery he loved, his legacy as a great plant hunter secured.
Forrest’s archive is at the Royal Botanic Gardens, Edinburgh.
AK Bulley’s Garden is now Liverpool University Botanic Gardens. 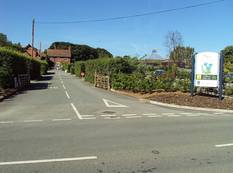 Part of the University of Liverpool! We are a seasonal garden open all year round, there is always lots to see so why not give us a visit?