Soil is one of our best weapons in the battle against climate change as it can store vast amounts of carbon.
Making sure garden soils are capturing as much carbon dioxide as possible is one thing every gardener can do to help tackle climate change.
For World Soil Day I'll be taking you through how soil can capture so much carbon and what you can do to help it along!

From plant to soil

You may know how plants take carbon dioxide from the atmosphere and use it in photosynthesis to make sugar and starch to be used in growth.
What you may not know is that as much as a fifth of the carbon fixed by photosynthesis travels to the roots. Here it is exuded into the rhizosphere – the zone immediately around the roots that's full of microorganisms.
The root exudate, referred to a liquid carbon by renown Australian soil scientist Christine Jones, has a critical role, as the plant uses it to trade for nutrients.
The essential organisms in this trade deal are the mycorrhizal fungi. These soil-dwellers have a mutually beneficial relationship with plants, gaining sugars and amino acids in return for nutrients.

Mycorrhizal fungi for intimate connections with the roots of most plants
About 90 per cent of plants have relationships with fungi, one notable exception being brassicas.
Mycorrhizal fungi have a crucial role in soil building as they produce a sticky carbon-rich compound called glomalin.
Glomalin glues soil particles (sand, silt and clay) and organic matter together to lock in carbon. They also help to create good soil structure with lots of pores to aerate the soil and improve drainage.

As well as exudates, the soil gains carbon from organic matter that falls to the ground, including leaves, branches, seeds and dead organic matter.

Soil is dynamic – it’s always changing. At any point in time, there are fresh, partly decayed and completely decayed organic materials mixed in there.
Some carbon dioxide is released into the atmosphere during the decomposition process by respiring microorganisms.
The rest remains locked up in soil for many months or, in the case of more persistent materials such as charcoal, for hundreds of years.
The endpoint of decomposition is humus. Humus is a stable carbon-rich material that helps to create the dark, crumbly soil that gardeners crave. If you have lots of humus, carbon stays locked in the ground for the long term.

What can you do to boost soil organic carbon?

Soils vary in their ability to hold onto carbon - clay soils hold on to carbon longer than sandy soil, and disturbed soils contain less carbon than one that is undisturbed.
But there are plenty of things we can do to improve the carbon-storing ability of our soils. I've summarised a few here, but check out Alan's articles for more information. 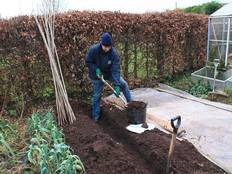 Boost soil organic matter by adding compost or mulches.
Keep your soil covered. Bare soil is vulnerable to wind and water erosion and will lose carbon. Once you have harvested your crops, sow green manure to protect your soil from the weather, especially over winter. A mulch of compost or even lawn clippings will also provide protection.
Don’t dig. A no-dig approach is much better for soil health, as any disturbance destroys the soil structure, harms earthworms and disrupts the fungal network. It exposes soil to the air too, increasing carbon losses.

Plant trees and shrubs. Trees and shrubs lock up carbon in their woody trunks and branches, while their extensive root systems exude sugar for microorganisms, help to bind the soil and retain water. Perennial veg beds are good too as the soil remains undisturbed.
Grow polycultures. Research has found that growing a diverse mix of plants is beneficial for soil life and leads to greater carbon storage.

Polyculture a mix of crops on one bed
Don’t use artificial fertilisers. Artificial fertilisers, especially those containing nitrogen, have been found to reduce plant exudates and disrupt soil life. Instead, use your own compost or make your own fertilisers, such as comfrey and nettle tea.
Increasing the carbon stored in your soil is not a quick fix, but if every gardener does their bit, the carbon uptake could be massive.
Carbon-farming expert Eric Toensmeier estimates that his own tiny carbon-rich back garden of just a tenth of an acre can offset the carbon emissions of one American adult per year!
Healthy soil not only helps to mop up carbon, but it’s also more resilient and better able to cope with drought and flooding, so why not try a bit of carbon farming for yourself!