Spring brings the first sightings of vast fields of acid yellow oilseed rape. For many beekeepers, it is the sign of the first honey crop. It’s tricky honey to harvest, as it crystallises (goes solid) very quickly. So, if it isn’t taken from the hive quickly, it becomes impossible to extract by ‘spinning’.

In recent years, oilseed rape has had a higher media profile, as it is treated with neonicotinoid pesticides as it grows. There was then a problem with bees feasting on this early spring nectar. Not only honey bees, but the solitary and bumblebees were becoming poisoned by the chemicals in the nectar and pollen. The ban on using such chemicals may have helped the bees, but conflicting reports about whether or not the farmers had better or worse crops without the pesticide continue to be published.

An argument for using neonicotinoids suggests that without them, far worse chemicals will be used by farmers. In the meantime, the bees are the guinea pigs. If we eat the honey (or the oil) from such chemically treated crops, perhaps we are too.
I have noticed an abundance of blackthorn, cherry and dandelions along the roadsides as I’ve travelled across the South of England this week. I am hoping that bees can wean themselves off the addictive neonicotinoid-treated crops and delight in the wild native hedgerows. 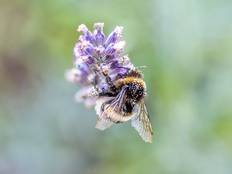 Perhaps, hedgerows could encourage the nesting of the birds and insects that feast on cabbage stem flea beetle (CSFB), the main pest that can damage Rape crops.

A busy morning, with help from Sarah Davies of the vegetable garden team. We began the week by hanging bait hives around the...

Bees in Your Garden

Spring brings a surge of activity to our gardens, as sleeping bees awaken and are attracted to blossoming flowers for pollen...