Tulips have a complicated history. These tiny bulbs were initially found in the mountains of Ukraine and Turkey through to Central Asia, as well as in the western Himalayas. They helped to create the world's first financial bubble during the Netherlands Golden Age.

Cultivated in Asia from the 10th century, it wasn't until the 16th century, when Oghier Ghislain de Busbecq, an ambassador from Rome sent them back from the Ottoman empire, that they reached Europe.
These, like the crocus, were shipped on to Carolus Clusius, the director of Leiden Botanical Gardens.
The Netherland's new independence, the emergence of the middle class and the length of propagation time led the tulip to become a status symbol and valuable commodity. So much so that in two separate raids, Clusius had over 100 bulbs stolen from the Gardens.

Identified in the 20th Century, this mosaic virus infects tulips bulbs, creating astonishingly beautiful variegated patterns to the petals but also weakening the plant.
Seeds collected from these flowers will have the original colour, so the only way to reproduce the pattern was to divide offsets.
These took two or three years to grow large enough to flower.
In the 17th century, this infection was unknown, and the phenomenon, referred to as 'broken', was highly desired.
Trading of these flowers, or the promise of them (the bulbs could only be physically traded during the summer when they were dormant), reached a peak between 1634 and 1637.

These promises to buy tulips when they were fully grown were traded in smoky pubs across the Netherlands.
Skilled craftsmen and women took loans against their looms so they could speculate and re-sell at a higher price. This led to tulip prices increasing tenfold in roughly two years.
Then in Haarlem, at a routine bulb auction in February 1637, when the leaves were poking their way above ground, not a single promise was sold. Possibly due to the town suffering an outbreak of bubonic plague, it dawned on the market that someone would soon have to pay the growers.
In less than three months the price across the country crashed by 99%. A bulb that had previously cost the equivalent of an upmarket canal side townhouse was suddenly worthless.

The most expensive tulip

During this period, the most valuable tulip was the 'Semper Augustus'. At one point there were only 12 bulbs in existence. The flowers had symmetrical patterns of red colour breaks around the outside of its pure white petals.
These were held at the end of slender stems, showing it off to full effect. It still ranks in the top ten of the most expensive flowers in the world. This, like many other popular varieties of the time, has disappeared. Breeders have been trying to develop reliable cultivars, known as "Rembrandts", that show the same patternation.

Unsurprisingly the tulip fell out of favour with the Dutch for a while, but it had already spread across the globe, taken by settlers to New Amsterdam and Holland, Michigan.
The love for tulips returned, and now Holland, along with New York, hosts some of the best tulip festivals in the world. In particular, the gardens at Keukenhof nr Haarlem are renowned for their incredible displays.
Back in the autumn, 100 breeders sent the festival their best bulbs to be planted. This year's theme is "Flower Power", celebrating the garden's 70th year of opening. It is open for eight weeks from the 21st March and tickets can be bought directly from Keukenhof. I am hoping to get there too!

Primulas are our go-to spring bedding plant. We buy more of them at this time of year than any other plant, and I don't know... 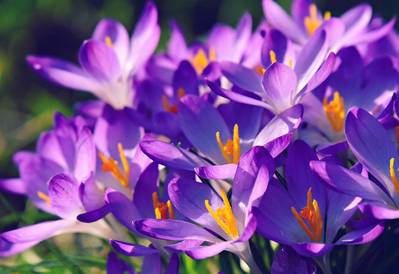