Everything You Need to Know About Japanese Maples 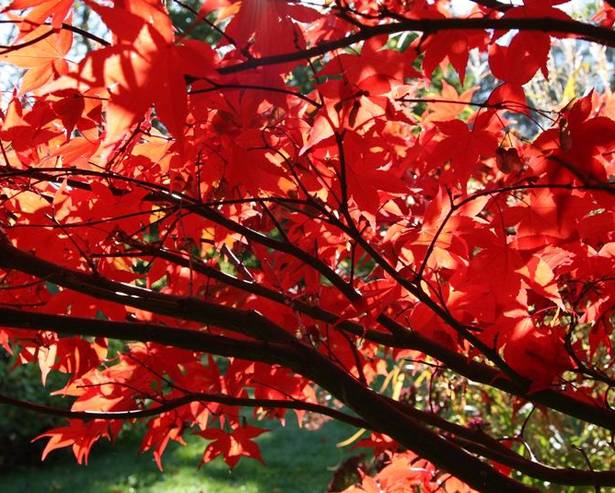 No other garden trees typify the autumn season in the way that maples do.
As October comes, their leaves change colour and light up the garden. In this Plant of the Month feature, I'll explain what they like and don't like and that there's a maple for every size garden. Even if you only grow plants in pots.

Japanese maples. Or are they?

Most maples (Acer) originate in Japan, but many have been collected from the wild in China, Korea and most of Eastern Asia. Collectively we have got to know them all as 'Japanese'.
The biggest group of maples planted expressly for autumn colour are Acer palmatum selections. Confusingly there are also the Acer japonica types which, as their species name suggests, come from Japan.

Confused? Read on to learn more about these top garden plants!

All varieties can be container grown, but some are better suited than others for long term growth in pots. A cut leaf maple in a pot
Acer palmatum has hundreds of varieties, but for pots, I'd recommend those that have finely cut leaves. Look for those that have the magic word 'dissectum' on their label. This indicates that the leaves are very finely serrated and divided to create a very soft, delicate appearance.
These plants tend to grow into a gentle weeping shape and can eventually become mushroom-shaped. 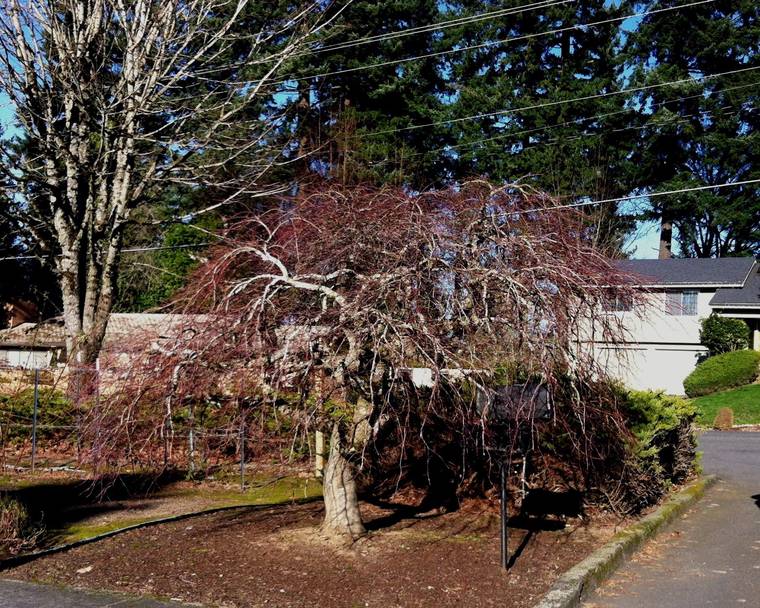 A cut leaf maple in winter showing its mushroom shape
Other varieties that have leaves that are not finely divided can also be grown in pots. But it is best to choose varieties that are smaller growing and be prepared to move up a pot size every couple of years or so.
I'd especially recommend growing Acer palmatum dissectum 'Inaba-shidare' or 'Crimson Queen'. Both have beautiful finely cut leaves which are a rich red when they emerge. In autumn this changes to orange-brown. 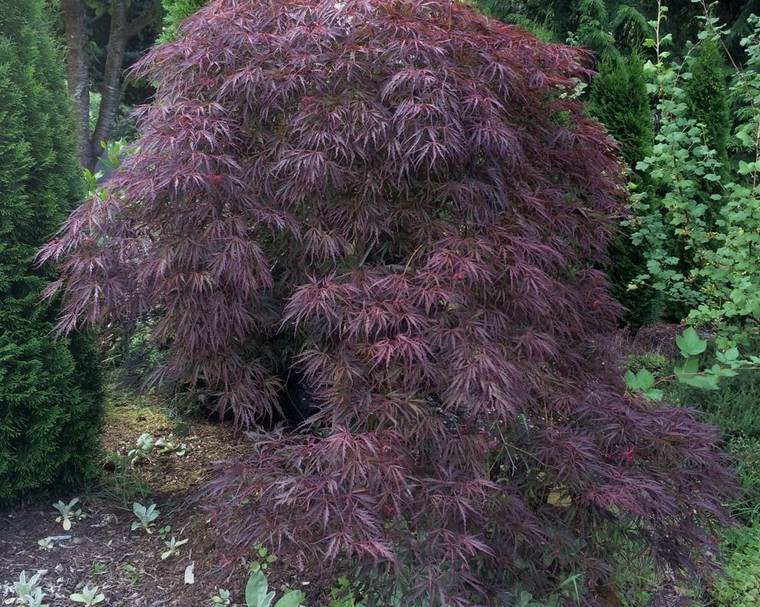 Acer palmatum Crimson Queen
If you prefer a plant that has green cut leaves, but a fiery orange autumn colour, then go for Acer palmatum dissectum 'Viridis'. 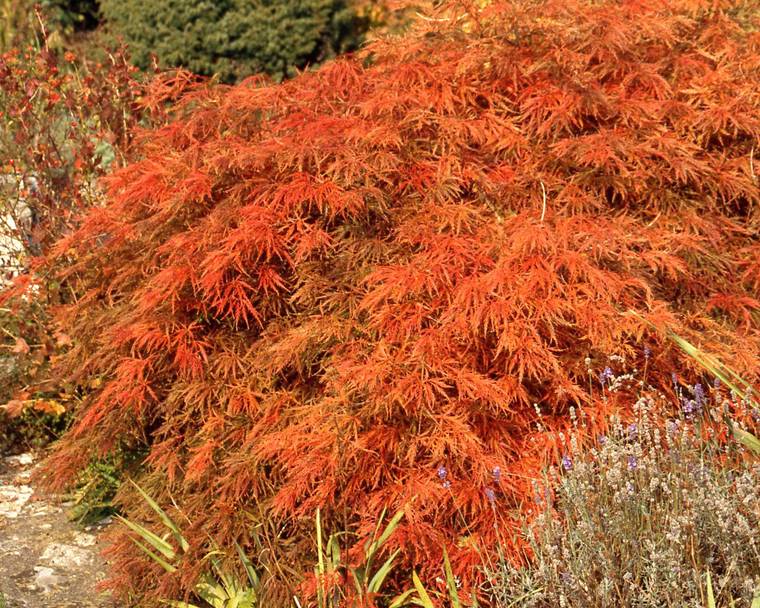 Maples for small to medium-sized gardens

If you have a bit more space than a patio or small courtyard, then there's room for one of the medium-sized maples.
They cast little shade when compared to many other trees, making it possible to plant under them. Try spring-flowering bulbs such as Scilla, winter aconites, snowdrops and dwarf daffodils. You could also grow coloured leaf Heuchera, spring-flowering hellebores and autumn flowering hardy cyclamen. 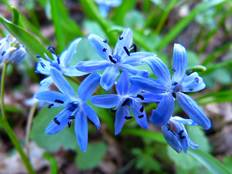 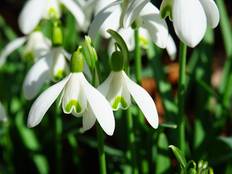 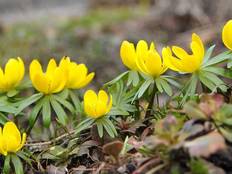 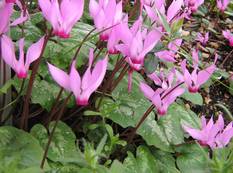 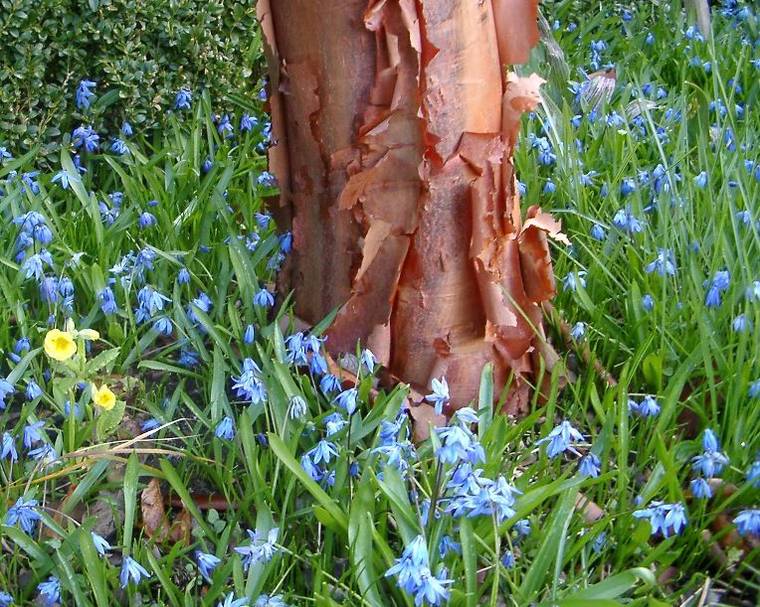 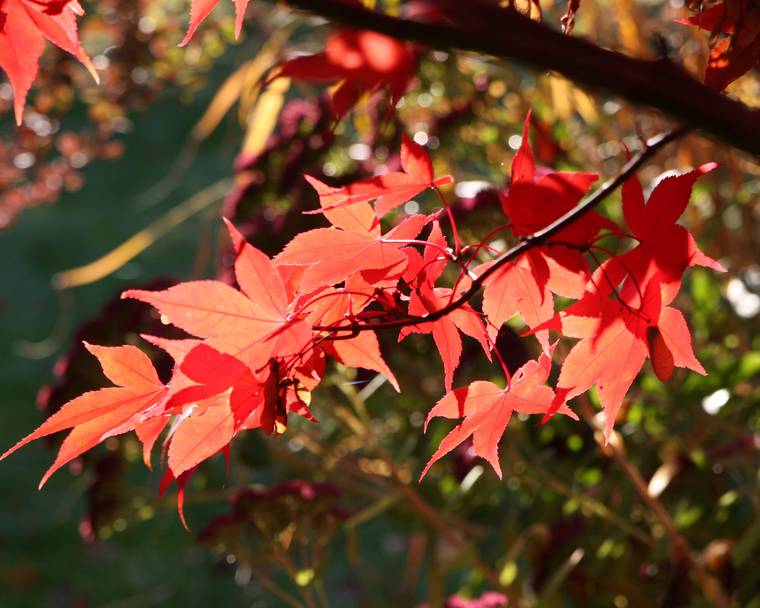 _Acer palmatum_ 'Osakazuki'
If you prefer to have coloured leaf in summer rather than the green colour that 'Osakazuki' offers, then I'd recommend planting Acer palmatum 'Bloodgood'. It's not the most attractive name, but this is a great plant! In autumn this variety will colour up well before dropping its leaves for winter. 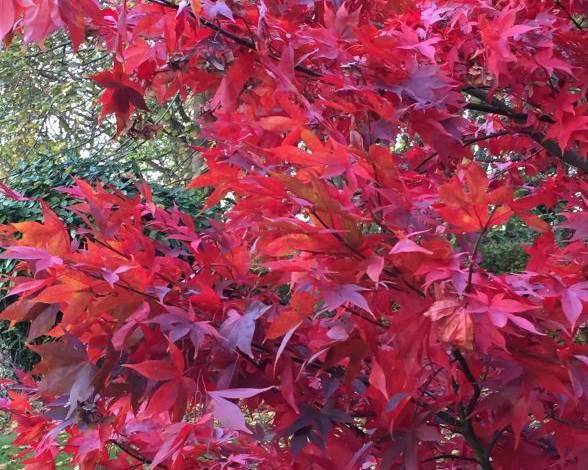 _Acer palmatum_ 'Bloodgood'
Try to find space in your garden for planting Acer palmatum 'Orange Dream'. As the name implies, the leaves are initially orange in colour but become paler yellow as summer progresses. 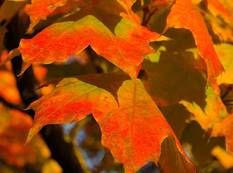 _Acer palmatum_ 'Orange Dream'
I've always liked the bold yellow leaf colour of Acer shirasuwanum 'Aureum'. Then along came 'Moonrise', which has coral-coloured new leaves that emerge throughout summer. This is one that's going into my new garden! Where you have plenty of space, you can of course grow those varieties that I've recommended for smaller areas. But there are also those varieties that will benefit from plenty of room.
It's worth mentioning that these are going to get much higher than a two-storey building.
Their shade is not dense and the leaves not large. The leaves are also not difficult to clear up after they fall. They also make excellent garden compost, but that's another subject.
If you have space, I'd recommend planting Acer palmatum 'Sengo Kaku'. It has coral red stems as a winter feature and lovely warm yellow autumn leaf colour. The red winter branches of _Acer palmatum_ 'Sengo Kaku'
The Paperbark maple Acer griseum is a firm favourite of mine, but it is slow-growing. It has good autumn leaf colour and fabulous cinnamon coloured peeling bark. Paperbark maple in winter
But if you've room for trees that are large, then you'll need to consider planting a Scarlet Maple [Acer rubrum]. There are a few good selections but for fiery red autumn colour 'October Glory' is a great one to plant. 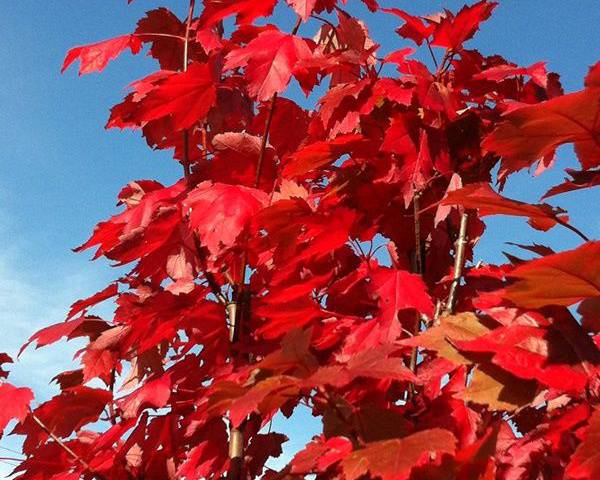 _Acer rubrum_
If yellow is your preferred autumn leaf colour, then Acer cappadocicum is for you. This is a quick grower, so a good pick if you're in a hurry. 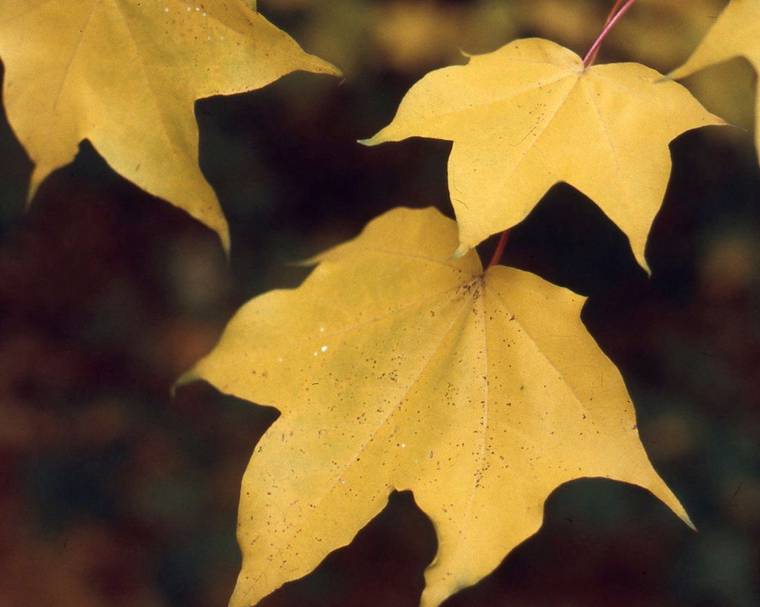 Maples for a hedge

Often overlooked, our native Field Maple grows into a lovely dense and prickle-free hedge. It tolerates an extensive range of soils and will grow in less than ideal soil conditions. This one is often sold as bare-rooted seedlings to be planted in winter when dormant and after the butter-yellow leaves of autumn have fallen off. A Field Maple in autumn

Don't plant Japanese maples on thin soils, especially if they are overlying chalk or limestone rock.
Think carefully where the cold winds of late winter and spring come into your garden and avoid planting your Japanese maple there.
Until properly established (this might take 3-5 years), maples, and indeed any newly planted trees, are prone to drying out. This tends to happen until a sound root system has become established. Do bear in mind that, even when established, the roots of a maple remain relatively near the surface.

Remember that maples are very hardy plants and can withstand intense cold periods when dormant. Some maples are grown from seed - an inexpensive method of propagation. However, results are variable, and it takes 5-10 years to see whether the seedling is going to have a good autumn colour.
Rooting cuttings are difficult. Young plants lack vigour so losses can be quite high and many varieties will not produce roots as cuttings.
Grafting onto a seedling rootstock is a very skilled practice and sadly one that is getting rarer in the UK. Nevertheless, this is the best way to propagate the best and most reliable varieties of Japanese maples. It is the skill of the propagator that you are paying for. 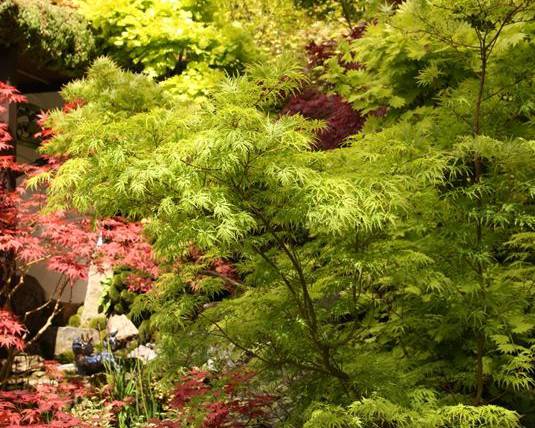 A mixture of Japanese maples

How long will they live

Maples are generally long-lived, but Japanese maples especially so. They will often live longer than people, leaving a legacy to hand to the next generation!
There's an adage used often in the nursery trade that the best time to plant a tree is 20 years ago!

Where to see great autumn colour

The National Arboretum at Westonbirt in Gloucestershire has an exceptional display of maples and is a 'must-see' in October and often into early November too. 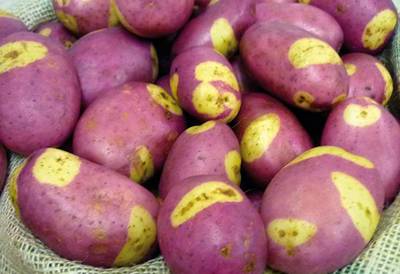 What to Do in the Garden This Week - October 2nd

This week, I'm focusing on sweet and conventional potatoes, how to get things right for lime-hating plants, transplanting... Alan's Edible Plant of the Month for October; Dessert Apples

My edible plant of the month for October is the dessert apple. In the UK, we are extremely fortunate to have both the climate... What to Do in the Vegetable Garden This October

October heralds a subtle shift from summer to winter crops. There's still some sowing and planting to do and some winter...