How do Bees Navigate?

In Australia, researchers have been investigating if bees have a preferred left or right flying direction.
Humans are mostly right-handed, but the researchers have found that bees show no particular preference, 55% having no bias when offered obstacles on a flight path.
The research was conducted by Professor Mandyam Srinivasan, from the University of Queensland. He and his team are trying to find out how bees tend to fly in swarms. After noticing that birds show preferences when flying in flocks to prevent colliding when in flight, Mandyam wanted to see if bees also would indicate a preference.

How bees find their way back to the hive has long baffled researchers.
He tested it by placing a barrier that the bees could only cross by using one of two gaps. Around 45% of the bees tended to steer one way rather than the other, but 55% showed no preference.
Although he was the first to uncover some preferences in individual bees, this raised questions on how an entire swarm of bees negotiates obstacles when flying across the landscape. Prof. Tom Seeley, from Cornell University, has been studying bees since the 1970s and is renowned for recording their methods of democratic decisions when selecting a new home.
By observing swarms in the wild and their ‘scouting’ of possible new homes, he discovered that bees only settle into their new home once a majority has made a democratic decision. As each scout bee finds a potential home, they return to the cluster and describe the exact location. More scout bees will then visit the site, along with other possible choices.

The queen is only slightly larger than the workers.
When flying in a swarm, the queen must be protected from predators, so she is closely guarded by her attendants as she flies.
Bees communicate information to each other through the waggle dance, first recorded by Karl von Frisch and neatly described here by Sir David.
To discover this, Karl had a glass-walled observation hive in his home from which he could observe the bee behaviour. By placing sugar syrup baits in various locations, he noted how bees returned to the hive and shared the locations of the sweet treats. An intricate dance of twirls and ‘waggles’ instruct the bees in the hive as to distance, direction and exact position of their target.
When moving a hive, it is vital to consider the bees navigation and communication methods. There is a golden rule of moving only 3 feet or 3 miles when relocating a hive. 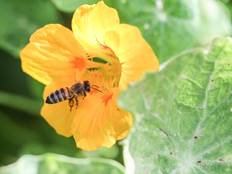 Bees are able to find the new location of a hive that has been moved less than three feet by using the Queen’s pheromones and scent excreted by the guard bees. Any more than this, then bees returning to the hive can become disoriented and fail to find their home.

However, when moved over three miles, the bees no longer have their familiar landmarks and will not try to return to the original location. So they will make orientation flights before searching for new sources of forage and getting on with it.
All considered it seems that bees have evolved the most efficient ways to fly and communicate. Right or left preferences may or may not come into this, only time and more research will tell!

Since spreading from mainland France into Jersey, the Asian hornet, Vespa velutina, has become a threat to honey bees in the...

If you're new to beekeeping, it’s very easy to get muddled in all the terminology. To help you on your way, here’s a brief...

How to Help Bees Without a Garden

It's important to remember that there are ways to help bees with or without a garden. For even the smallest of spaces, a...