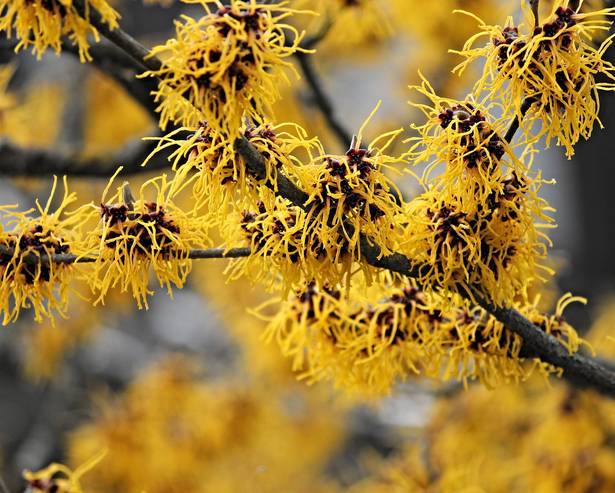 Hamamelis or Witch Hazel are natural teasers. You're walking past and you suddenly notice a tiny hint of a vivid yellow, bright orange or flashy red peeking from a mousy brown bud on a nondescript shrub.
Every day you look, and still, only the smallest amount of its colourful petals can be seen. Then, just as you've stopped noticing, the sun shines and the long slender petals fully unfurl, turning a plain bare shrub into a riot of colour at the tail end of winter.

Hamamelis mollis, and H. x intermedia (H.japonica x H. mollis) and their cultivars are the flowering varieties we mostly see in our parks and gardens but these are relatively new introductions. The plant hunter Charles Maries is credited with collecting it from the Chinese district of Jiujiang in 1879 for Vietech Nurseries who propagated it and introduced it to the market in 1902.

Hamamelis virginiana, H. mexicana, H. ovalis and H. vernalis are native to North America and were used by Native Americans for a whole range of medicinal purposes.
The Puritan settlers learnt of these decoctions and process was refined until it was produced commercially in 1866. It is one of the few plant substances approved by the Food and Drug Administration for use in over the counter medication.
It has natural antioxidant and astringent properties that are still utilised in skin care products, anti-ageing serums, shaving creams, bug repellent and haemorrhoid products.

The common name is thought to have come from the Old English word wice which means 'pliant' or bendable. It is thought that when European settlers witnessed the indigenous people of the Americans using the twigs of H.virginiana as divining rods, they compared it to the Hazel back home due to the similarities of its bark and leaves.
One settler, Thomas Hariot, wrote in 1588 that people were using "wich-hazle" to make bows.

Introduction to the UK

Peter Collinson (1694-1768) is recognised as being instrumental in its introduction to the UK. He was a woollen-draper who used his trade links to obtain plants, collecting and sharing them with botanical collections and wealthy influential persons. A self-taught botanist, he became a Fellow of the Royal Society in 1728 and corresponded with John Bartram (American botanist) and Benjamin Franklin (US Founding Father) whose American Philosophical Society he later supported.
It soon became popular in garden circles and by 1826 was listed in Cupleper's Complete Herbal (which was widely read at the time), as Hazel nut (another common name for H.virginiana)

The flowers of H. virginiana appear in late summer and they are often missed because of its colourful autumn leaves. It has slowly been replaced by H.mollis (and hybrids) whose spidery flowers appear later but more visibly. Because of this, they are not regularly stocked by nurseries, and it may take some research to find a supplier if you do want one. 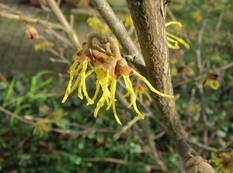 Thankfully, their colourful cousins can be bought easily and their displays are always welcome on a bleak late winters day.

Growing them is relatively simple, once you've got the soil right. They prefer a soil that is neutral to acidic (pH 4.5 to 6.5) and is free draining. Because neither my garden or allotment can provide that, I grow mine in ericaceous compost in a container, which works well.
I can move it to give it the protection it needs from the worst of the winter weather and then position it in the full sun for the rest of the year, to prevent it from growing straggly.
There are lots of wonderful cultivars available, here's a few I'd recommend. 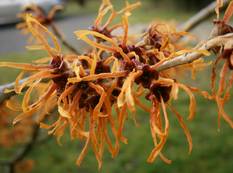 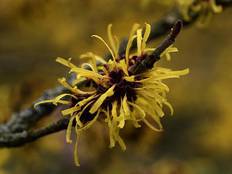 Choosing which potatoes to grow