English Parkland in the 16th Century

To find out more about Britain's medieval parkland, check out my previous article on the topic.

I have no doubt that anyone who has grown up in Britain will have learnt about the Tudors at school. We know them best for their divorces, their religious indecision and their fondness for beheading people.
They are, however, also famous for their formal gardens and grand palaces. Hampton Court attracts thousands of visitors each year, as does Longleat. These attractions deserve such attention, but there is much beyond the walls of the garden that should interest us.

Hampton Court Palace Gardens
During the sixteenth century, it became much more popular to encircle grand residences with a large park.
In some cases, landowners would remove entire villages in order to enclose the land for their private use. The remains of medieval village Wharram Percy in North Yorkshire can still be seen in the landscape.

The remains of the Norman church at the deserted medieval village of Wharram Percy
Although a few park owners began to convert some of their lands into pasture or arable in this period, the vast majority viewed their park as a landscape of leisure, and this was to set the precedent for many years to come.
As a result of parkland being more closely associated with country homes, aesthetic considerations began to play a bigger role than they had in the Middle Ages.
The park was now also appreciated for its wildlife, its open spaces and its beauty.
The National Trust’s Dunsland Park- in Devon, once the site of a Tudor house, boasts great opportunities to explore an ancient park and go on wildlife walks.

An image of Dunsland Park from around 1850. The house was destroyed by a fire in 1967
Landscape historians Tom Williamson and Liz Bellamy have said that the sweeping lawns, lakes and clumps of trees that were key features of the Tudor park provided a stylised and sanitised version of the ‘natural’ landscape.
This, in contrast with the ordered pleasure gardens around the house, provided a pleasing prospect to the owners.
Hunting continued to be the top sport, and the status associated with deer ownership persisted from the medieval period.

Elizabeth I out hunting
Knole Park in Kent was a top hunting spot for Henry VIII.
Now owned by the National Trust, the house and gardens are usually open to the public, though they are currently closed due to coronavirus.
The park remained an overt display of power in this period; the ability to own such vast swathes of land purely for pleasure was a projection of the owner’s wealth and status.

A deer at Knole Park
Changing fashions and developments have meant that most Tudor parks are no longer in existence, but there are plenty of places you can visit to get a better idea of their history.
A 16th century garden remains at Godolphin, Cornwall for example, and a series of original fishponds can be found in the park at Hardwick Hall in Derbyshire. 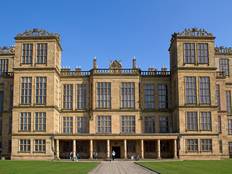 It was the formidable 'Bess of Hardwick' who first created Hardwick in the 1500s. In the centuries since then her descendants, farmers, gardeners, builders, decorators, embroiderers and craftsmen of all kinds have contributed and made Hardwick their creation. We’d like you to explore and enjoy Hardwick and in the process discover the lives, loves and adventures of the creators of Hardwick.

For the time being, as we try our best to stay at home, perhaps look them up online and learn a little more about their history in anticipation for a visit in the future!

It is easy to wander through one of London's great parks or the grounds of a National Trust property without fully...

What to Do in the Garden This Week - June 11th

An almost frost-free spring has lead to promising fruit crops, so I have a few tips on getting the best out of them. I'm also...