It’s always disappointing and worrying when one of your beloved plants starts developing a sickness, especially when you had to fork out quite a bit of money to buy it! After all, a plant growing healthily is one that’s not only in harmony with the environment, but also with its own biological components.
Part of the pleasure of growing plants (indoors or out) is in learning how to avoid and manage plant troubles. In many cases, problems manifest themselves with distinct and recognisable symptoms. A single pest or disease being the culprit is rather uncommon.
Instead, ill-health is often due to a lack of one or more essential growth factors: light, water, warmth, humidity, and nutrients. These symptoms, without the intervention of a pest or disease, are termed disorders.

Learning to look out for and treat problems is one of the joys of growing plants.
One of the first steps when buying a plant, is to select one that will flourish in the environmental conditions you are able to provide. Of course, it’s not quite as simple as that! Learning to recognise the cause of problems means you can take quick and effective action.
So, why is your plant dying? In this edition of Candide’s Leaf Doctor, we’ll cover some of the main non-nutrient deficiencies you are likely to encounter, and how to tackle them promptly.

Life cannot survive without water. The loss of water causes plant desiccation (hence wilting). Though many plants may survive brief periods of drought in winter, infrequent watering during the growing season is often more detrimental to the plant.
Underwatering symptoms include a general dullness of the leaf, leading to leaves and roots becoming toughened. Leaves will then turn brown and die. The best solution is to maintain adequate watering at all times, without excessive drenching, particularly during flowering or fruiting.

Low temperatures can result in a specific type of injury for plants, the most common of which is frost. Damage is often self-evident, but not associated with plants that are considered hardy under the growing conditions.
Symptoms of frost exposure include rapid blackening, wilting, or shrivelling. Buds may be killed, leaf edges may be scorched, and flowers are often killed outright. The reasoning behind this is the formation of ice crystals in plant cells, which draws out further water from the cells and leads to their walls to break.

Frost causes ice crystal formation in plant cells.
A huge range of plants are susceptible, but one of the ways you can prevent frost damage is by selecting hardy species for the local conditions. Avoid frost-hollows, which may be as large as a valley or as small as a garden!
Try some physical protective measures, such as cold-frames, cloches, or coverings with horticultural fleece. Talk to your nurserymen or experienced local gardeners for advice on what plants or preventative measures may be suitable. 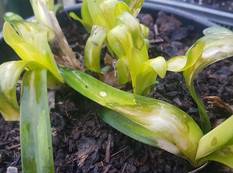 The most common condition caused by high temperature is known as sun scald, and can affect the bark of thin-barked trees (e.g. beech and cherries), growing fruit (e.g. apples, gooseberries, and tomatoes), or leaves of plants grown under glass or indoors.

Tell-tale signs of too much heat, causing papery-brown patches on this Monstera leaf.
Scorch symptoms cause papery, brown patches, and can be minimised by providing adequate ventilation in a greenhouse or shading elsewhere. Lower leaves may dry up and fall, particularly if accompanied by dry air (low humidity).

The absence of light causes pale and weak growth. After all, adequate light is essential for green life. This may occur if plants are overgrown by larger species, or are kept in indoor areas where light is of insufficient quality or quantity to support growth. This may be in dark passages, corners of large rooms, or even hallways!
Plants may often reach flowering size but do not show any flowers at the due time of year, also often the result of a lack of light or incorrect day length. The best way to correct for a lack of light, is to move plants to brighter areas from time to time, particularly during the growing season.

The most usual cause of plant death, particularly during winter, is overwatering. This is a problem relatively infrequent outdoors. Leaves become yellow and droop, making owners think they’re lacking water. Sometimes these symptoms are confused by drought – but drought differs by leading to brown and shrivelled leaves.
The more serious aspect to overwatering is the development of root-rotting organisms. These become active due to limiting oxygen supplies and the inability of carbon dioxide to diffuse away. Sometimes if a plant is overwatered, it just doesn’t seem to recover afterwards. If leaves stay dull, yellow, and the whole plant seems to be on a slippery slope towards death, then root rot is probably the cause.

Not a problem for indoor plants, of course, but lightning can be quite striking! Isolated trees are more likely to be struck by lightning, showing signs of complete shattering of the trunk or a long scar down the side. They may not necessarily be killed, although in a garden they ought to be removed to prevent attack by decay organisms. 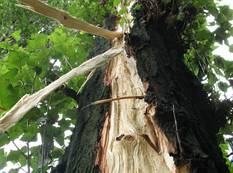 Though rain itself may cause temporary damage to flowers, the effects on leaves are often minimal. Rain, however, plays an important role in dispersing spores of parasitic fungi. These spores must be able to land on, adhere to, and germinate on the new host – so be careful that a fungal disease doesn’t develop in areas that have been wet for many hours.
Freezing rain (glazed frosts) is a relatively rare occurrence, but can damage leaves due to the considerable weight that layers of ice can impart. This can sometimes be sufficient to break branches, or even uproot large shrubs and trees in the most extreme of cases.

Snow accumulation may cause branches to break.
Snowfall is perhaps more of a regular occurence in periods of winter, particularly in northern Europe. It plays an important factor in protecting plants from harsh winter temperatures, but may contribute to breakage of branches if left to accumulate. 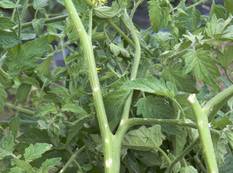 Wind itself may have various mechanical effects on plants, particularly on exposed sites. Trees may appear to be permanently leaning over, because of dead buds on the windward side (due to the drying effects of the wind). On the sea coast, wind-borne salt spray may cause an overall browning of the foliage, something gardeners will consider beyond their control.
Plants may be completely uprooted, with trees having large crowns, shallow soils, or fibrous root systems being most vulnerable. Young trees, shrubs, and herbaceous plants may rock to and fro in the ground, without being uprooted. In these cases, it’s recommended to firm the plant in again promptly, to avoid the invasion of pathogenic organisms.
More familiar to gardeners is perhaps the snapping off of tree trunks or branches. If this happens, the broken stub should be sawn off close to the basal collar.

It is useful for gardeners to be able to distinguish pollutant damage from other non-chemical factors. While there are a number of widespread pollutants arriving in gardens, symptoms are commonly divided into chronic (injured, but not killed tissue) and acute (killed tissue).
The most common observations on leaves are necrotic or bleached flecks or stipples, particularly on the upper surface and between veins. They may also be broader bands of necrosis or scorching. Often, symptoms are observed uniformly across the entire plant, but if it occurs unidirectionally, an airborne pollutant should be immediately suspected.
Prevention depends on how easily the source can be removed, or plants selected for their ability to resist damage or act as wind-breaks.

Talk to your plants...

Finally, a word for the beginners out there – growing plants isn’t all doom and gloom, and can be one of the most rewarding experiences even if you don’t have a green thumb! Talking to your plants may not have any effect on your plants, but we do recommend daily checks – even if it's for a few minutes – to get to know what and when things may go wrong.
This is much easier with houseplants, as the stress can usually be limited to a few main factors. We’ve put together a handy reference guide to help you identify common leaf symptoms, and what may be causing them!