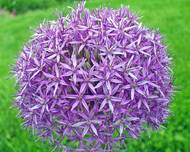 Allium ampeloprasum var. porrum 'Musselburgh' is a heritage cultivar of the broadleaf wild leak, this traditionally popular vegetable is winter hardy and produces thick white tasty stems which can be harvested from Nov. through until Feb. Commonly known as Leeks, they are biennials which are grown for their long fleshy stems and strong taste ideal for adding to soups, stews and casseroles or eaten raw as part of a salad. Leek 'Musselburgh' can be sown into seed trays, under glass in late winter and transplant after the last frosts for the best results. As the stems start to grow and mature they can be blanched by mounding up dry soil around them. Your tasty stalks should be ready to be harvested in early autumn, throughout winter and into early spring.

Growing Vegetables From Scraps: How To Make Your Food Shop Go Further

How to harvest Leek 'Musselburgh'

Gently lift stems with a folk as and when required.

How to propagate Leek 'Musselburgh'

Other uses of Leek 'Musselburgh'

Used in a variety of cuisines dishes.