Photo by Jo.Baker (All rights reserved) 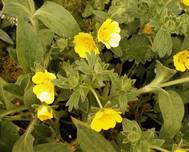 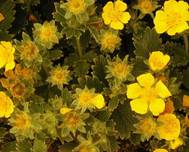 Potentilla megalantha is a perennial plant from the Rosaceae family. Commonly known as Large Flowered Cinquefoil. It forms a low mound of broadly trifoliate leaves that are heavily veined like embossed leather but are matt rather than shiny. In early summer upward peering flowers are produced that are shallow cupped shaped and a clear-yellow with orange centres colour. In autumn the leaves turn a lemon-yellow colour. This species is part of the Royal Horticultural Society “Plants for Pollinators” initiative to showcase plants which support pollinator populations by providing ample amounts of nectar and/ or pollen. A great choice for encouraging pollinating insect wildlife into your garden!

How to propagate Large Flowered Cinquefoil

Softwood or greenwood cuttings in summer.

Other uses of Large Flowered Cinquefoil

A good edge of the border plant, in sun.