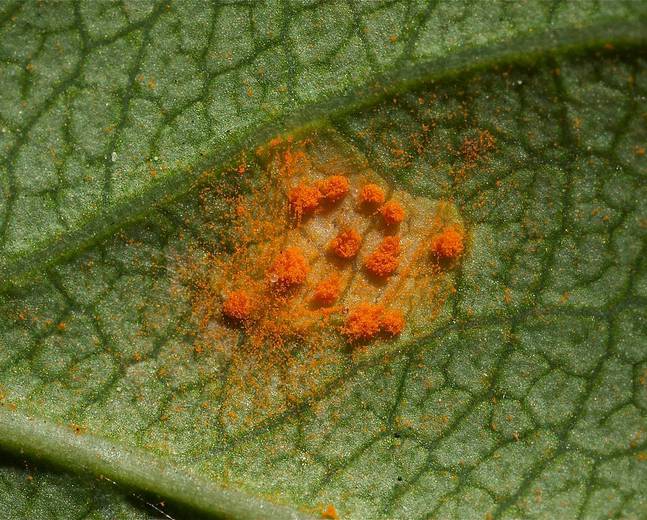 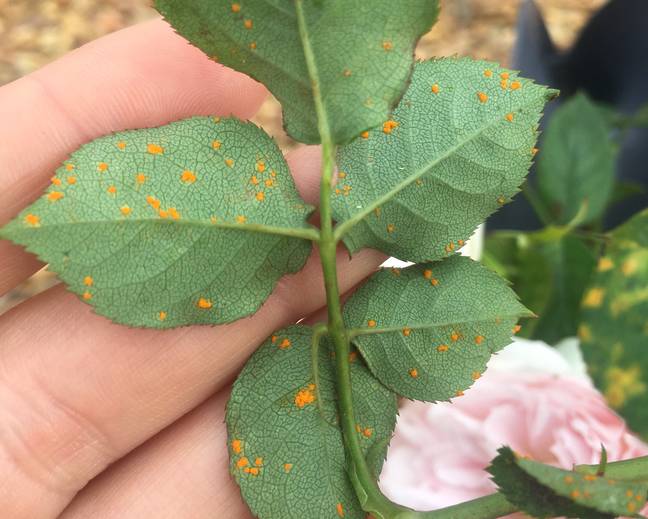 1 of 3
Rose rust is a parasitic fungus that feeds on living cells of a rose and is the least serious of all rose diseases. It affects all species of the family Rosaceae and can substantially weaken a rose and affect overall vigour of the plant.

Orange spots, which may appear a little bit raised are visible on the underside of leaves and yellow blotches on the top surface of a leaf. Distorted growth on specific parts of the rose bush might also be visible. characteristic orange mass of spores and distorted growth at specific locations on the bush. red-orange spots (raised looking like warts) on undersides of leaves and yellow blotches on top surfaces. Infected leaves may fall early.

Prune out the spring infections as soon as possible and collect and destroy fallen leaves to prevent the spreading of overwintering spores.

In the spring, the very first spores, spermatogonia, arise out of the debris on the ground and infects the young stem, distorting them and producing orange pustules. These pustules break open and infect the leaves. In the Summer, these darker orange spores called urediniospores spread through the wind. Eventually, in late August, the urediniospores and sori become speckled with black fascicles and dark resting spores called teliospores. The teliospores turn into aeciospores which are the spores that adhere to stems and leaves to overwinter.[citation needed] like all rusts, infects host tissue and feed on healthy cells, not able to survive on dead plant material, so must either alternate with a different, perennial host or produce a resting spore to pass the dormant season. Only attack roses and pass the winter as resting spores.

Good soil drainage is vital for moisture control - mulch well or create raised beds. Improved air circulation will help to prevent the disease. Prune the center or your rose bushed to improve air circulation. Avoid working in a wet rose garden to reduce spreading of the spores.