Common butterfly species might experience another bump in numbers after a record-breaking summer.
The 'Common Blue' was once the most widespread of the UK's blue butterflies, spotted in small numbers all over the country.
During last year's summer heatwave their numbers more than doubled, and Butterfly Conservation hopes this upward trend will continue.

In a recent report, they predicted that with the country experiencing another heatwave in 2019 and the Met Office forecasting above-average temperatures throughout August, the Common Blue could see its best-ever summer.
Common Blues prefer unimproved grasslands, therefore can't be found in gardens or cities. That's why Butterfly Conservation teamed up with Campaign for National Parks to ask the public to look out for and record the Common Blue at the 13 parks they work to protect across England and Wales. 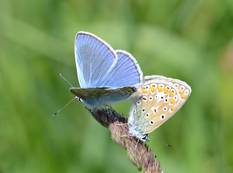 Butterfly Conservation's Senior Surveys Officer, Dr Zoe Randle, said:
"It would really help us if people could get outside and look for this butterfly, so we can see if its fortunes really have turned around or if the Common Blue still needs our help.
Common Blue males have unmarked, bright blue upper wings, but females have orange crescents and dark spots near the outer edges on a ground colour that varies from purple-blue to dark brown, with a mere tinge of blue near to the body.
The underwings of both sexes have numerous black spots, with white halos and orange marks around the edges.
If you spot any of the Common Blue butterflies, you can submit your sightings at www.bigbutterflycount.org

Gardening for Charity - Driftwood By the Sea

At the age of 51, Geoff Stonebanks packed up his North London home to retire to the coast. Having looked at over 140...

How to Help Bees Without a Garden

It's important to remember that there are ways to help bees with or without a garden. For even the smallest of spaces, a...

Perennial Supports Gardeners in "Back To School" Season

Perennial, the charity supporting people working in horticulture, has launched a 'back to school' campaign.