Poking up through lawns, appearing from under shrubs in flower beds and in outdoor containers that you'd forgotten you'd planted, the emerging buds of Snowdrops makes you smile and lightens your step with the promise that spring is not far behind.
It's botanical name of Galanthus comes from the Greek words 'gala' (Milk) and 'anthos' (flower), it's easy to understand why they chose that name. The pure brilliant white as snow outer tepals give us it's common name.

The term Galanthophile is given to anyone who collects the species and cultivars of this stunningly simple looking bulb. It gives so much joy that's it's not surprising they've been collected by so many people throughout recent(ish) history and still inspire dedicated collectors today.
The term is credited to E.A. Bowles (1865-1954) a noted plantsman whose name you'll see in many other plant species but it was also given to one cultivar of Galanthus plicatus that was found at his family home, Myddelton House. 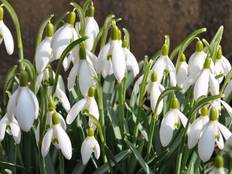 Galanthus plicatus 'E.A. Bowles' is an 'albino' with six pure white petals and flowers in February.
Other snowdrops has been named after other notable galanthophiles such as Primrose Warburg (1920-1996) as several cultivars originated from her garden in South Hayes, Oxfordshire.

But there are so many more 'Snowdrops' out there to learn. The Hardy Plant Association has a group purely for these delicate beauties, hosting annual AGM's and Study days with galanthophile's visiting collections and sharing their plants. They sell out quickly!

There are Snowdrop festivals and events throughout January, February and March and online searches will quickly find an event near you, from Scotland's Dawyck Botanic Gardens to Chelsea Physic Garden down to East Lambrook Manor in Somerset.
There is even a Snowdrop Fair (7th - 9th Feb.) in Boshoeve, near Arnhem (Netherlands) that alongside selling plants includes 'Galanthofilia' all things decorated with snowdrops from postcards to hand painted crockery and everything in between. 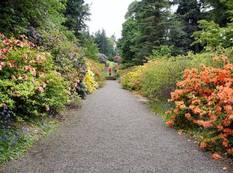 Dawyck is truly one of the world’s finest arboreta. Seasonal displays of abundant exotic and native plants provide a breathtaking backdrop of colour throughout the year. The Garden also offers an award-winning visitor centre.

An extraordinary space at the heart of the capital. 17th Century apothecaries established Chelsea Physic Garden, and their work is continued today in its living collection of around 5,000 plants that have changed the world. Tucked away beside the Thames in one of London’s smartest boroughs, the Chelsea Physic Garden is a retreat from the buzz of the city. Within its sheltered walls, rare and unusual plants flourish: walkthrough shaded avenues and admire the gardens of edible, herbal and medicinal plants, colourful floral displays from the Atlantic islands and woodland and wilderness areas. Don’t miss the historical collections in the 100-year-old glasshouses. The Physic Garden Café serves up breakfast and lunch using British produce that you can enjoy while admiring the gardens. The garden shop is a real treat for horticultural goodies and gifts. And a whole host of events runs all year, from workshops to family activities. 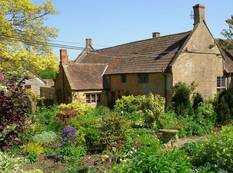 East Lambrook Manor Gardens is the iconic and quintessentially English cottage garden created by the celebrated 20th-century plantswoman and gardening writer Margery Fish. It was here that she developed her own style of gardening, combining old-fashioned and contemporary plants in a relaxed and informal manner to create a garden of immense beauty and charm.

Almost everyone I know loves Snowdrops and there's nothing nicer than seeing swathes of them running through a garden or wooded area. Propagating them can be really easy. If you have a large clump in your garden, why not divide them either for yourself or potted up as gifts.

The experts recommend bulbs are best lifted and divided while they're dormant, between June and September before new roots start to grow.
I have to admit, I never remember and by that time the other perennials and shrubs have hidden the soil and I can't remember where they were. I did try putting a stick in to mark the spot but along came the dog and plucked it out so I knew that was a non-starter.
A lot of people wait until the flowers have finished and the foliage is just starting to 'die back'. Known as being In The Green it does seem to work well.

And that's it, next year, depending on species the flowers will emerge and your smile won't be far behind!

How many different types of Snowdrops do you have? I loved to see your pictures!,

What to Do in the Garden This Weekend - January 23rd

The Christmas festivities are starting to feel like they were a long time ago and the days are still miserably short and dark... 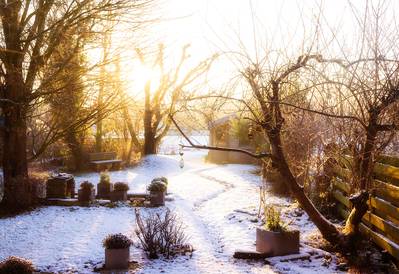