For over forty years, the end of January has seen the UK turn into a nation of avid twitchers, with people across the nation taking an hour out of their day to sit and watch the world (and the birds) go by.

What is the RSPB Big Garden Birdwatch?

The RSPB’s Big Garden Birdwatch originally started as a way to teach children about nature, but it’s now become a vital part of the charity’s research and draws in people of all ages. In 2021, the birdwatch takes place from the 29th to the 31st of January, and as we’re spending most of our time at home this year, it’s expected to garner some of the biggest participation numbers ever.
But despite the name, there’s no need to miss out on the fun if you lack a garden -- which, according to a recent Ordnance Survey study, is a problem around one in eight UK households have to deal with. There are plenty of ways you can take part in the Big Garden Birdwatch without any outdoor space at all -- read on to discover how.

Get Involved in the Big Garden Birdwatch 2021!

Find a space that works for you

In previous years, the RSPB has suggested you team up with a friend or family member with a garden to do the birdwatch; due to current restrictions this isn’t something we recommend, but there are still plenty of options if you don’t have a private garden.
A communal space within an estate or blocks of flats is a perfect place to do the birdwatch. You could even get the neighbours involved for a fun, socially distanced activity from your windows or balconies. Alternatively, combine your birdwatching with your daily exercise and head to a secluded park, nature reserve, woodland, or any nearby public fields where you can set up camp. In cities, lesser-visited places like churchyards or riverbanks are ideal spaces for finding a bit of privacy and spotting some birds who have had the same idea.
Of course, not everyone has access to a quiet park or field, and some of us aren’t able to leave our homes at all right now. But this has never stopped birdwatch participants before. The RSPB has reported that previous attempts have been made from houseboats, tower blocks, and even prisons, so don’t despair if you’re limited to sitting on the balcony or simply looking out of the window. 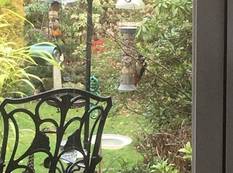 Woody’s Great Spotted cousin. Need a name for he or she?! 🤔 #sunny #thriving #woodpecker #birdwatch #January2020 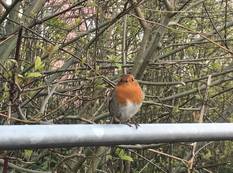 Make your space work for the birds

“If you build it, they will come” may be a line from a Kevin Costner film, but it’s also a good motto to bear in mind when birdwatching. It doesn’t matter what sort of outdoor space you have; there are always steps you can take to make it more inviting to our feathered friends. You may not have room for a traditional stone birdbath on your balcony, but what about setting up a small dish of water for them to splash about in?
When putting out food on a balcony, it’s important to consider the less welcome guests you might be enticed into your space, so put feeders up high in a hard-to-reach place and ensure that they’re covered to deter pests like rats. Many feeders can also double as a bird box, which provides a dry, cosy space for birds to rest. Start with mixed birdseed and things like fat balls, which can be easily hung around a balcony amongst your plants, before adjusting your offerings to suit your local birds’ gourmet tastes. 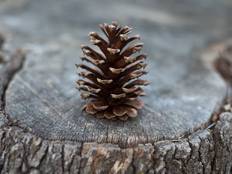 If you don’t have a balcony, a suction bird feeder attached to a window is a great option. Usually made of clear plastic, they adhere easily to the glass and make birdwatching a breeze -- and with nothing but a window between you and your visitors, you’re sure to get some great photos.
Along with making sure your home is welcoming to birds, it’s also important to make sure it’s safe for them to visit. Anti-collision stickers on windows can prevent them from flying into the glass, which could injure or even kill them. If you have a cat that likes to go outside on the balcony, place the birdfeeders well out of reach of curious paws and consider getting them a collar with a bell.

Make sure you have the right tools

So you’ve found your space, you’ve put out a welcoming spread of seeds and a place for them to shelter. Now how do you actually take part in the Big Garden (or Balcony, or Windowsill) Birdwatch? It’s relatively simple: just order your free pack from the RSPB and get swotting up on how to tell your swallows from your starlings.
You don’t need any fancy gadgets, though you may want to have a pair of binoculars handy if you’re birdwatching in a wide-open space, and of course, a camera or smartphone means you can snap pictures of any visitors.
You can also find printable resources on the RSPB website.

House sparrows were the most sighted bird in 2020. Which bird will be the most common this year?
The house sparrow was the most common bird of 2020, making an appearance in over 60% of gardens, but there were also recordings of more unusual birds like buzzards, green-ringed parakeets, and lesser-spotted woodpeckers; so you never know what you might see! Making Space for Birds in the Garden

Alongside offering birds food, providing them with a safe place to build a nest is one of the best things gardeners can do to...

Helen Lockwood teaches us how to make vegetarian fat balls with just two ingredients. Using vegetable suet and birdfeed, it's...

How to Identify the Top Ten Most Common Garden Birds

With a bit more peace and quiet outside, you might be getting a few more feathered visitors to your garden.