How to Identify the Most Common Trees in the UK

In the UK, Oak trees are a symbol of strength and oak woodland supports more native species than any other type of woodland.
Where: Oaks are a common sight and are commonly found in broadleaf woodlands. They tolerate a wide range of soil conditions but prefer well-drained soils in sunny locations.
Size: Up to 40m.
Leaves: Large, alternate, lobed leaves with smooth edges. Oak trees are deciduous so leaves are lost in winter.
Seeds: Seeds are encased in acorns which are up to 2.5cm long and held in a cup.
Bark: Young oaks have smooth, silver-brown bark whereas mature trees have darker brown, fissured bark.

Beech trees can live for up to 300 years and the nuts have historically been used by farmers to fatten up pigs.
Where: Widespread but most common in southern and central England. Can form dense, shady woodlands and prefers drier chalky soils.
Size: Up to 40m.
Leaves: Alternate, oval leaves with wavy edges. Younger leaves are a lighter green and have very fine hairs which they lose with maturity. Young trees, around 2m tall or less, will also hold onto their dead leaves during winter.
Seeds: Seeds produced in the form of beech nuts which are encased in green, prickly cases.
Bark: Thin, grey bark which is smooth when trees are young.

Easy to identify in winter as well as summer, it is estimated that there are up to 185 million Ash trees in the UK.
Where: Often found in mixed broadleaf woodland and greenspaces, such as parks and woodlands. Needs deep, well-drained soil in sunny locations.
Size: Up to 35m.
Leaves: Compound leaves made up of 3-6 pairs of serrated leaflets with a single leaflet at the end. Ash trees are deciduous so lose their leaves, but they can be identified in winter by their large, black buds.
Seeds: Seeds come in the form of green ‘keys’ which hang in clusters.
Bark: Smooth, grey bark which becomes darker and more fissured with age. Bark often has lichens growing on it.

The horse chestnut isn’t native to the UK, however it has become naturalised since its introduction in the 1600s.
Where: Widely planted in parks and as street trees. They tolerate a wide range of soil conditions but prefer rich, moist soils in sunny locations.
Size: Up to 40m.
Leaves: Large, palmate (originating from a single point) leaves with 5-7 serrated leaflets. Horse Chestnuts are deciduous so leaves are lost in winter.
Seeds: Clusters of white flowers become conkers which are the seed of the horse chestnut. These are encased in green, spiky cases.
Bark: Grey/brown in colour with lots of fissures.

Sycamore is part of the maple family and, although it has been in the UK since the 1500s, its value here is still widely debated.
Where: Sycamore spreads quickly and can grow in almost all types of soils and habitat. Prefers fertile, well-drained soil in sunny locations.
Size: Up to 35m.
Leaves: Palmate leaves on red stalks with 5, toothed lobes. Sycamores are deciduous so lose their leaves in winter.
Seeds: Winged seeds called samaras which can commonly be recognised as ‘helicopter’ seeds.
Bark: Smooth and grey when young and develops cracks which leads to bark having a scaled appearance.

This water-loving species is valuable to its environment as it can fix nitrogen from the air using bacteria in its roots.
Where: Thrives on wet ground near rivers or streams. Able to grow on low quality soils due to its ability to fix nitrogen.
Size: Up to 20m.
Leaves: Rounded, serrated leaves in an alternate arrangement. Leaves sometimes have an indent at the tip. Alder are deciduous so lose their leaves in winter.
Seeds: Alder produce flowers in the form of catkins which become small cones which contain the seeds.
Bark: Dark grey and fissured.

Hornbeam timber is very hard and was historically used to make cog wheels and gears.
Where: Native to southern England but now widespread across the UK. Tolerant to a wide range of soil conditions but prefers well-drained soil in sunny locations.
Size: Up to 30m.
Leaves: Alternate, oval leaves with finely toothed edges. Leaves are green in summer and yellow in winter and, although it is deciduous, hornbeam trees can hold onto their leaves throughout winter.
Seeds: Hornbeams produce catkins which become winged seeds.
Bark: Pale silvery-grey colour with vertical markings.

Scots Pine is the only pine tree species native to the UK and is Scotland’s national tree.
Where: Grows naturally and is widespread mainly in the Caledonian forest of the Scottish Highlands, however it has been planted in other areas of the UK. Grows well in poor, acidic, dry soils. Size: Up to 35m.
Leaves: Needle-like leaves, typical of conifers, that are arranged in pairs. Scots Pine is evergreen so trees keep their leaves on year-round.
Seeds: Seeds are encased in pinecones.
Bark: Thick, scaly bark which is dark brown in the lower sections of the tree and a brown/orange colour higher up.

Rowan is a pioneer species which means it can grow quickly in barren environments and creates a more hospitable environment for other plants and animals.
Where: Widely planted as a garden and street tree and commonly found at higher altitudes in the mountains. Although it is tolerant to a wide range of conditions, it prefers fertile, well-drained soil in full sun.
Size: Up to 15m.
Leaves: Pinnate, compound leaves made up of 6-8 pairs of oval, serrated leaflets with a single leaflet at the tip. Rowan are deciduous so lose their leaves in winter.
Seeds: White flowers become vibrant red berries which grow in clusters and contain the seeds.
Bark: Smooth and grey-brown in colour.

There are many different species of willow in the UK, including goat willow, crack willow and white willow.
Where: Willows can be found in a range of habitats, including parks, woodlands and near water bodies. Willow trees prefer full sun and deep soil with a high water content.
Size: The size of the willow will depend on the species. For example, goat willows can grow up to 12m while white willows can grow up to 25m.
Leaves: Long, thin, oval shaped leaves with smooth edges. Dark green on top and lighter green underneath. Willows are deciduous so lose their leaves in winter.
Seeds: Catkins become fluffy white seeds which are easily dispersed by wind.
Bark: Grey-brown colour and can develop deep fissures over time.
Free download for your phone or tablet

Who Are The Community Forest Trust?

Across England, there is a network of small organisations, charities, people and partnerships all passionate about creating... Everything You Need to Know About Visiting Gardens During Lockdown 2

As the UK headed into lockdown for a second time, life once again changed for a lot of us and we can’t do the things we would... 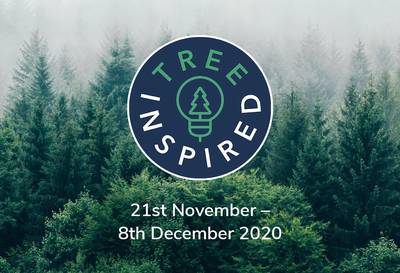 Whether it's childhood memories of clambering through branches or lazy summer afternoons walking through city parks, trees...