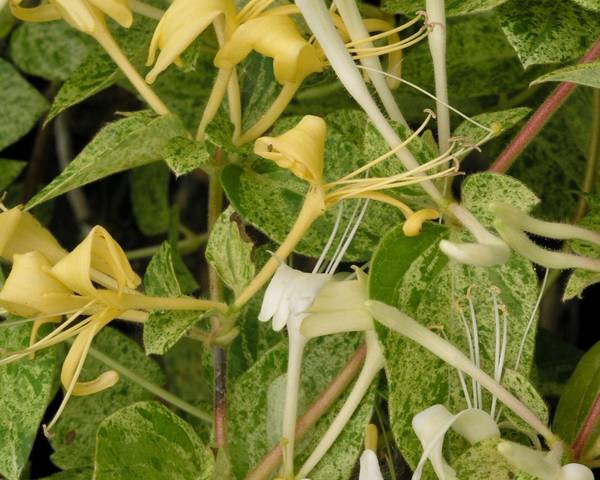 Photo by Tynings-Climbers (All rights reserved) 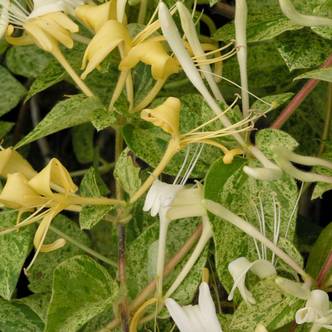 Japanese Honeysuckle 'Mint Crisp', the name by which it's most commonly known, is a frost-hardy, semi-evergreen climber that is relatively compact but vigorous. It produces stunning marbled pale-dark green leaves that take on a pink flush later in the year. This beautiful foliage provides an ideal backdrop for the fragrant cream-gold flowers which appear from summer to autumn. Also known by the name Honeysuckle 'Mint Crisp'. Preferring a partially shaded spot (but will tolerate full sun), this climber happily grows in containers - provided it's given something to scramble up. Place a container next to your door or a path where you can receive the full benefit of its beauty and fragrance - along with bees and other pollinators! Suitable for many garden settings - urban or rural - this Honeysuckle likes moist, well-drained soil. It is often seen climbing up walls from garden borders and it is suited to sites near the coast. Botanically known as Lonicera japonica 'Mint Crisp', this cultivar is protected by Plant Breeders' Rights. (These provide the breeder of new plants exclusive control over the plant material for a set amount of time.) This plant is included in Schedule 9 of The Wildlife (Northern Ireland) Order (1985) as an invasive non-native species.

Reported to be deer-resistant.

Layer stems in summer and detach when roots have formed.