Take a slow wander through your garden or local park and you'll see the daffodils beginning to show their new growth. It makes me so happy to see the bulbs I bought very cheaply at the end of the last January and planted very late (for daffodils) showing flower heads as well as the leaf. 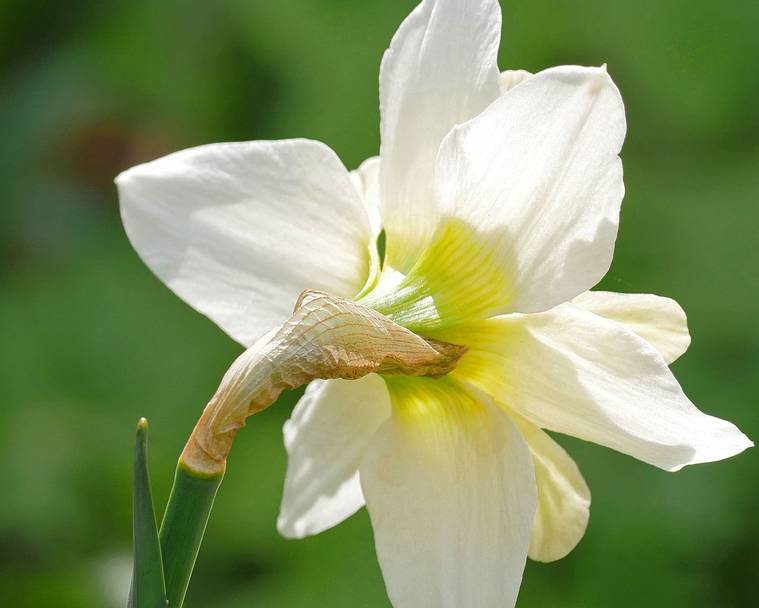 And I know I'm not alone, people have been obsessing over the Narcissus genus for a very long time. Originally from the Iberian peninsula (Spain & Portugal), the bulb is thought to have appeared between 33.9 to 5.33 million years ago.
The name is frequently linked to the Greek god Narcissus who fell in love with his own reflection but it was grown by ancient civilisations for medicinal purposes long before this story appeared.
By the 10th Century, it had spread to the Far East and became increasingly popular in the UK from the 16th Century onwards.

This humble perennial bulb has taken on many symbolic meanings, the most widely held is that of rebirth, as it is one of the first to emerge from winters slumber, its arrival heralds the beginning of Spring. The bright yellow flowers grab our sight (and pollinating insects) more so than any other colour in the weak spring light.
It's also the second national emblem of Wales although it's a relatively new introduction because of language confusion; The Welsh for leek (the national veg that helped St David lead them to victory against the Saxons) is Cenhinen while the Welsh for daffodil is Cenhinen Pedr.
Its spring appearance around the 1st March when St. Davids Day is celebrated also ensures you'll see plenty of proud fans at sports events dressed in inflatable flowers (bring on the Six Nations Scotland vs. Wales Rugby!). 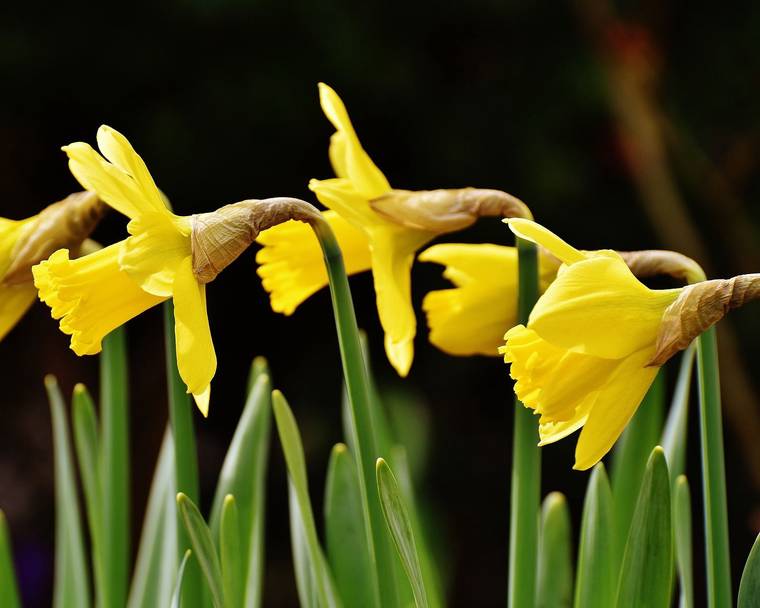 More people die from eating daffodils in the UK than any other poisonous plant. Mostly the bulbs are mistakenly thought to be onions and unfortunately, cooking does not lower the toxicity of the atropine which paralyzes the central nervous system.
Historically, in herbal medicine the powdered flowers or bulbs were used to induce vomiting, purging the body while the roots, boiled in oil were thought to help raw, rubbed heels. A paste was made as a plaster for burns and wounds for its astringent properties.
Today daffodils grown commercially on slopes of the Black Mountains in Mid-Wales are used to produce galantamine for the treatment of Alzheimer's disease. 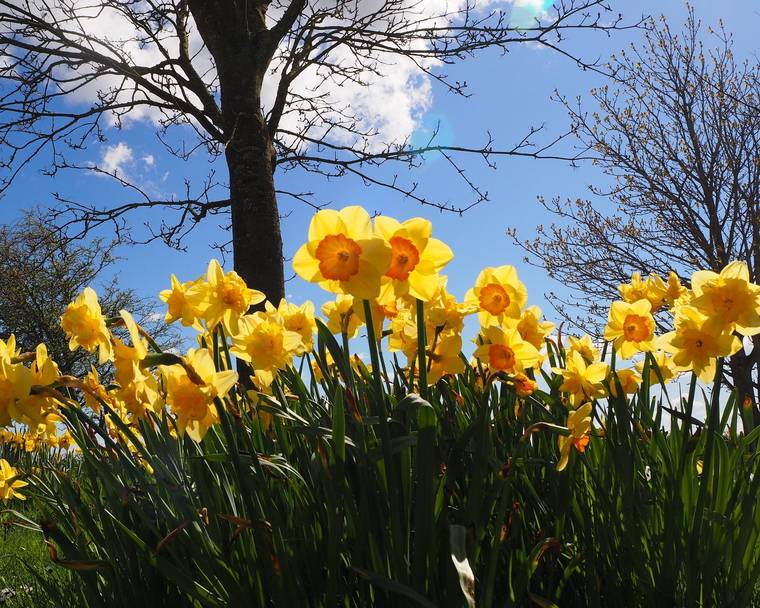 The first sighting of a daffodil is one of the joys of spring but if you haven't forced indoor varieties and can't wait any longer for your own to flower, buy cut bunches of unopened stems which are beginning to appear in the supermarkets. It's even possible to order them by post.
The marine climate of the Scilly Isles is ideal for narcissus and after a short boat and aeroplane ride, they can be delivered to your front door.
For those of you who really love daffodils, it's possible by picking the right flowering varieties to have flowering daffodils from Chrismas through until May. 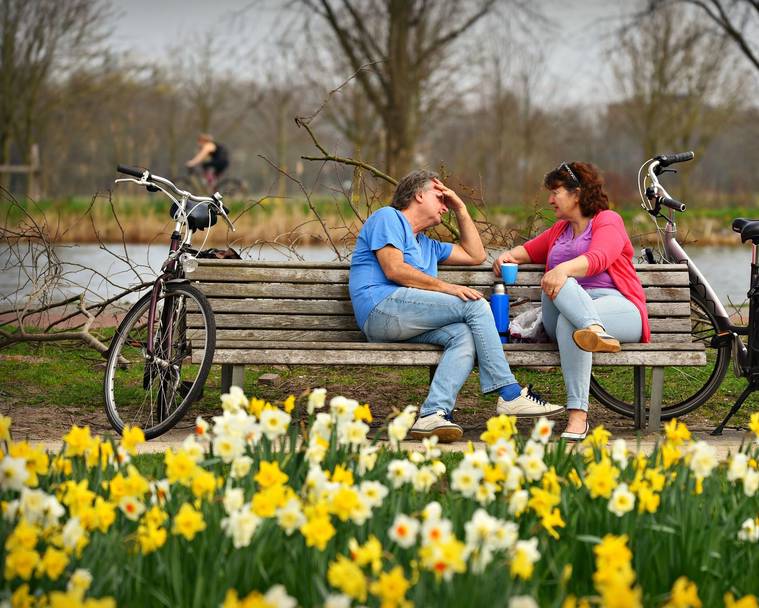 Some of the varieties to try for flowers in April are 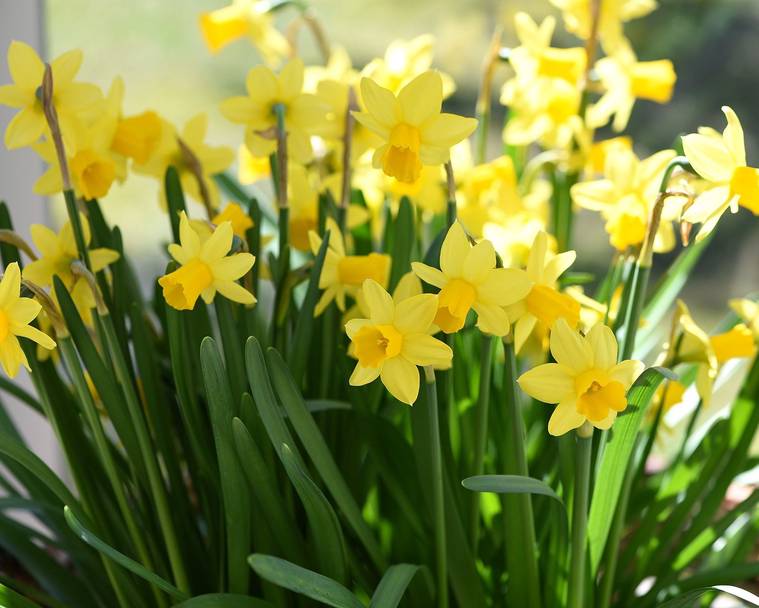 If you're not sure which varieties you want or are in search of inspiration, then there are Daffodil societies throughout the world who organise events and shows which can be visited.
The oldest in the UK is The Daffodil Society whose annual show is at Pershore College on the 20th and 21st April. 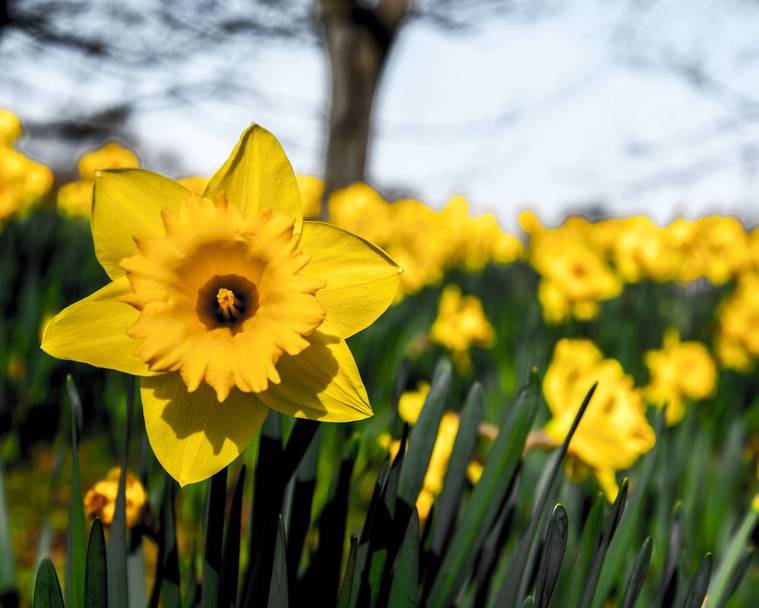 It should be noted that producing blooms to be in perfect condition on show day is an art. Growing hundreds of plants, moving containers in and out of the greenhouse at the correct time to delay or speed up growing, keeping flowers in chilled conditions until show day and arranging them in the correct manner takes dedication. I've entered my local Garden club's Spring show with mixed results, thankfully an older more experienced competitor gave me lots of advice, gardening folk are good like that. 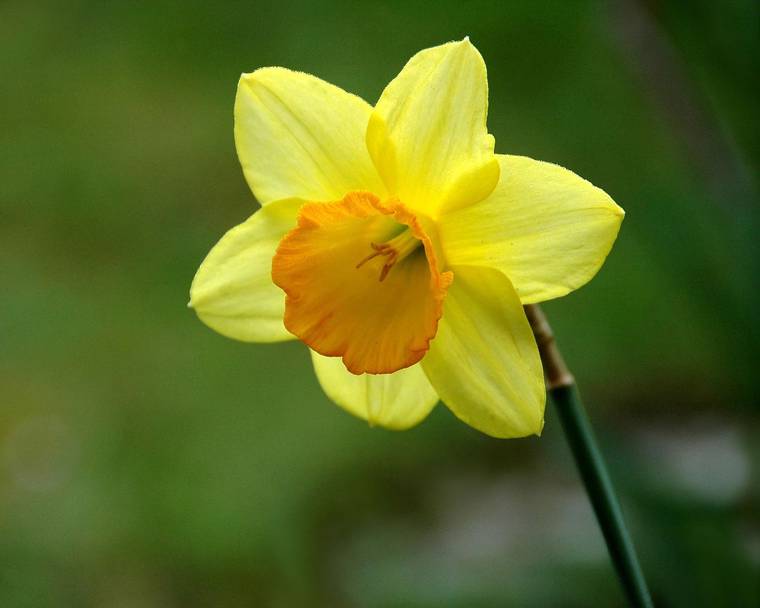 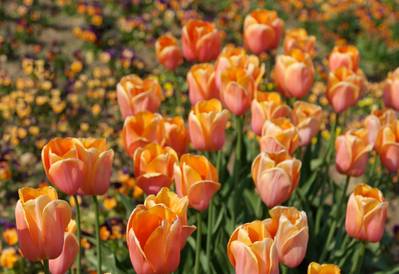 Whether they’re flowering in your garden or cramming the shelves in garden centres, bulbs are everywhere right now. Looking at...

Spring bulbs, it's not too late!

The low temperatures have been with us for less than a week and I'm already looking forward to Spring. In particular, the... 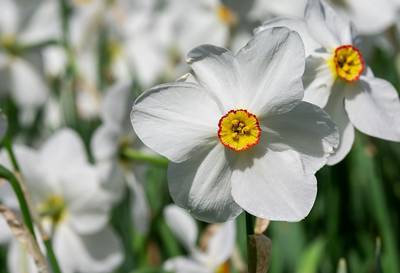 What is our national flower? That’ll depend on where you’re reading this article, of course, but if you’re in the United...