56
Over the last couple of summers, I have been frequently asked about pruning wisteria. So I thought I'd share some advice that will hopefully re-assure new growers how simple a task it is, provided you have a sturdy ladder and a good set of secateurs.

Very few of us have space in our gardens to let a Wisteria ramble unchecked. Most varieties can reach 20m (66ft) high and spread out by 10m (33ft), so controlling their vigorous growth is an important task.
The added benefit is that regular pruning will encourage and enhance the plant's flower production. The removal of summer foliage helps this climber to produce short spurs which have a higher chance of producing flowering buds.
Wisteria, trained as an espalier, looks stunning grown along a wall.

How To Prune Wisteria

Pruning is best done twice a year, once in July or August after flowering has finished and again in January or February while the plant is dormant.
Download the free Candide App to get help and answers from a warm community of gardeners

Summer pruning
Using secateurs, cut back any of this year's unwanted shoots to the sixth leaf from the stem it is emerging from. Check overcrowded areas, removing excess shoots. Good air circulation is also essential for flower development.
This years shoots will be green. Avoid cutting into brown woody stems.
Winter pruning
Any new shoots which had been cut back in summer can now be pruned back to two or three buds (1-2" from the older wood). If there are any longer shoots from the summer's cut back, prune them back to five or six buds from the older wood.
Renovation pruning
Occasionally hard pruning is needed, usually when maintenance has to take place on the structures supporting the plant or when parts of the plant break. A wire supporting one of my client's vine recently broke, and the falling weight of the plant snapped the main stem.
Usually, renovation pruning takes place during the dormant period by cutting back a section at a time. You will need to trace and unwind stems slowly back to the main stem, or even back to ground level. The final cut needs to be just above a strong young shoot or branch.
Cutting back like this will stimulate vigorous new growth, and the advice is to avoid feeding the plant for the first year to help control the vigour. It will take between two to three years before the new stems produce flowers.

Why isn't my wisteria flowering?

Frustratingly, over-pruning or pruning too early can prevent flower production instead of promoting it. If possible, try to resist the urge to get clipping as soon as the shoots start twining their way over the gutters or window frames.
If, however, you've been patient and trimmed lightly, there are a couple of other reasons why your wisteria might not be flowering.
We've all got our fingers crossed that our neighbour's plant will flower next year.
I hope this has given you some pointers on how to care for wisteria or has inspired you to try and grow one. There are lots of varieties to choose from, and in a few years, your mature flowering vine will be the envy of the neighbourhood and us here at Candide. 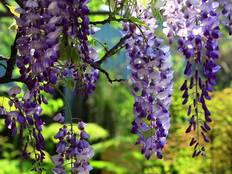 I know thinking about the long winter months during the summer is the last thing on anyone's minds. But now is the last chance...

How to Defend Against Vine Weevil

This little beetle has recently become my arch-nemesis. Nine times out of ten, it's not until a plant suddenly dies that I...

For many of us, the arrival of sunny weather presents a window of opportunity for multiplying our plants, and the easiest way...