12,000 Purple Crocuses Flower in The Fight Against Polio 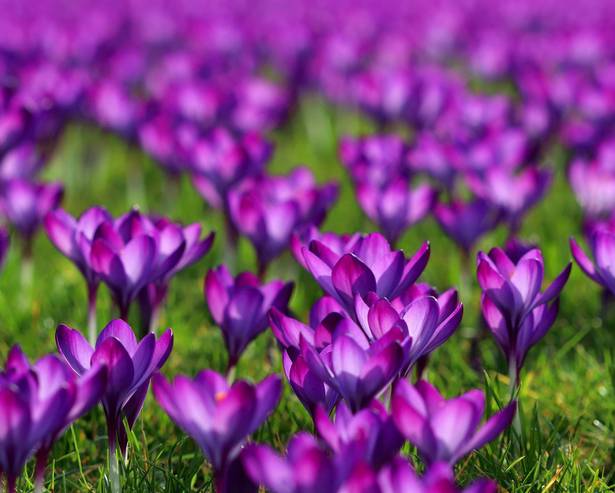 The purple crocus tomasinianus represents success, pride and dignity, but for many it also resembles the immunisation of polio. This is the case for Redditch Kingfisher Rotary Club who decided to plant a sea of the coloured flowers last year.
On 13th October 2019, members of the club and volunteers came together at Arrow Valley Country Park to plant 12,000 crocus bulbs in 1 hour to raise awareness of the eradication polio. The event saw 100 people attempt to set a new Guinness World Record while also highlighting the importance of vaccination against the disease.
General secretary for Rotary International, Amanda Watkin says Redditch Rotary Club has been planting crocus bulbs since Rotary began their polio campaign.
Download Candide to your phone to get your daily gardening news

‘[This time], we thought “why not do something a bit different?,” she continues, ‘rather than doing a planting as a small club, [we wanted to] make it a public facing event.
‘It was a nice thing to get the [local population] involved in, plus it has created colour and life in the green space of Arrow Valley.’ Image credit: Redditch Kingfisher Rotary Club
Amanda, who has also been a member of Rotary for 18 years and a member of the Redditch group since 2015, explains the crocuses are purple due to what they symbolise.
‘When a child is immunised in a developing country, they have their finger dyed purple and it shows a child has received their vaccination. It’s not just a randomly chosen colour,’ she says.
‘Each one of the 12,000 [flowers] represents another 12,000 children [whose lives] will have been positively impacted, so they won’t contract polio and they won’t be disabled or lose their life as a result.’
The Global Polio Eradication Initiative (GPEI) began in the ‘80s. At this time, there were thought to be more than 365,000 cases per year – equivalent to over 1,000 cases per day. Since then, Rotary groups around the world have got behind it. Following fundraising events and awareness campaigns, polio is on the brink of eradication with only an estimated 100 cases per year worldwide. Image credit: Redditch Kingfisher Rotary Club
‘We have a real understanding that there are people that have post-polio syndrome (PPS) [a condition that affects polio survivors years after recovery],’ adds Amanda, ‘we are very fortunate in the UK that most of our children are vaccinated through school and early years vaccination programmes. Although, like with any disease; if a vaccination [is available], but if the emphasis on why we have that vaccination is lost, people think they don’t need to vaccinate anymore.
‘We want to ensure people remember that the vaccination of children in the UK is really important because disease is only a plane ride away. The current coronavirus reinforces how easy it is to transport something from one part of the world to another and it’s no different with polio.’
According to Amanda, even the weather on the day of the planting symbolised the battle against polio.
‘From a growth perspective, the rain did have a negative impact on the bulbs this year,’ she says, ‘but they’ll get stronger for next year. Similar to the people who are having to fight polio, these bulbs represent that fight on a local level. They have had to battle the elements.’ Image credit: Redditch Kingfisher Rotary Club
However, the weather didn’t put people off from supporting a good cause as founding member of Redditch Kingfisher Rotary Club David Strain found out.
‘We had young children right up to pensioners planting bulbs in terrible conditions,’ he explains.
‘The weather was atrocious, but in some ways it probably helped the planting because the ground was softer. We arranged for the fire brigade to soak the ground the day before, but we didn’t need them,’ laughs David.
‘Despite the conditions, everybody remained cheerful and I was absolutely amazed at the community spirit of everybody.’
While the crocuses have had a fight on their stalks, both Amanda and David are pleased with the result. Image credit: Redditch Kingfisher Rotary Club
‘[The crocuses] are beautiful and they will come back year after year,’ exclaims Amanda, ‘it brings back the memory of community effort. If society is going to be strengthened, the key way is by the citizens. Government can set out all sorts of strategies, but the power of the people is ultimate.’
She hopes that when visitors see the flowers, it will reinforce that when people work together, they can achieve a lot.
‘It was more [than I expected]. We had no idea how it was going to turn out. We achieved our aim and more,’ adds David.
Amanda explains you can easily replicate this in your garden.
‘All you need to do is purchase some Ruby Giant crocus bulbs and plant them [with soil and compost] in a pot. I have some in my back garden and when they grow, they look great because they are well protected in a home environment. For a home display, they are amazing,’ she says. Image credit: Redditch Kingfisher Rotary Club
She hopes this will reinforce the importance of vaccination.
‘If you can’t remember polio, just remember to vaccinate your kids.’
Since the event took place, the Redditch club has been attempting to prove their world record to Guinness. Despite video and photographic evidence, their submission has not yet been accepted. They are continuing to gather additional evidence in the hope that Guinness will award them with a world record.
All money raised from the event will go to the Rotary Foundation for Polio Eradication and UNESCO. Image credit: Redditch Kingfisher Rotary Club
Rotary is a global network of 1.2 million people who unite and take action to create lasting change across the globe, in communities and in themselves.
You can donate or become a member of Rotary.
Free download for your phone or tablet

Whether you're a plant mum, a pet mum or a mother of humans, Mother's Day may look a little different this year. Here are some...

Fast-growing evergreen shrubs can be incredibly useful to a gardener.

How to Grow Chillies

Helen teaches us the basics of growing chillies indoors and how to have success with germinating chilli seeds.