Flowering evergreen shrubs are invaluable to a garden. Once a year they steal the show with their blooms but also add colour and character all year round. To help you find the perfect one for your garden, I've chosen six of the best to share with you.

Spines cover the stems and leaves of Berberis making them prickly to touch.
Boasting beautiful foliage and fruits in autumn, Berberis can be grown where the soil is heavy and thick or thin and sandy.
In my old nursery, I used to grow over 30 species and varieties of evergreen Berberis in their 10s of thousands each year.
Of all the various species, Berberis darwinii is one of my favourites.
Where to buy Berberis plants:

Fast-growing and colourful; Ceanothus are justifiably a popular evergreen flowering shrubs.
They are known by the common name, Californian Lilac. Although, they are nothing like a typical Lilac tree.
Ceonothus originate from California, so it will come as no surprise that they enjoy a bit of sunshine. So, if you have a sunny spot that is vacant in your garden, a Ceonthus could be a great choice for you.

On the downside, evergreen Ceanothus don't like being pruned so think carefully about the size before planting. If you must prune - do it as soon as the spring blooms fade and cut a little and often.
This is in total contrast to deciduous Ceanothus which are best pruned very hard every spring. 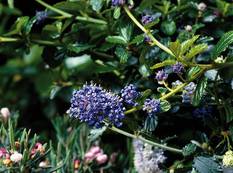 While being very wind tolerant (even those salty coastal winds), evergreen Ceanothus can have a very poor root system and can be blown over in a strong gust. They also struggle in cold temperatures.
Where to buy Ceanothus:

Commonly known as Brooms, Cytisus is a fast-growing, evergreen shrub.
The flowers produced in spring are very prolific, sweetly scented and come in a wide range of colours. 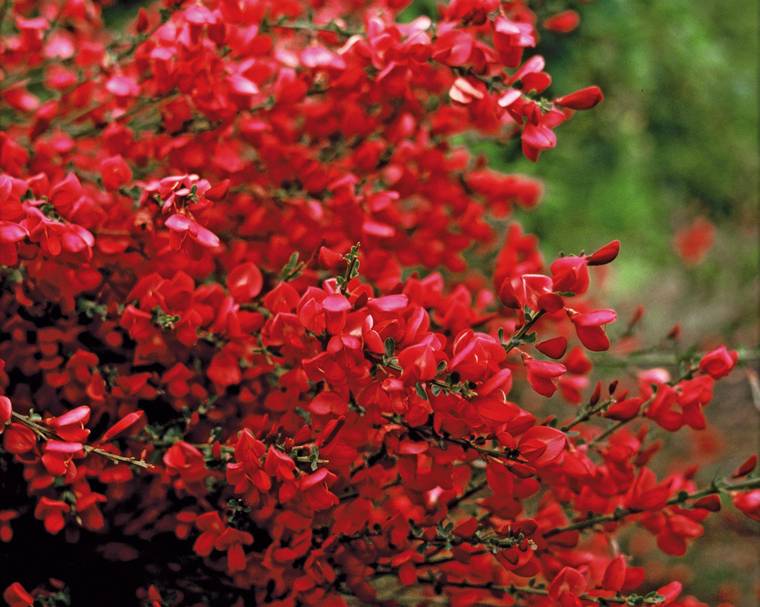 Bright red Cytisus 'Boskoop'
Another shrub that's a sun lover, Brooms don not tolerate shade well. They have a relatively weak root system so they can sometimes be shorter-lived when compared with other shrubs.
For healthy growth, plant Brooms omewhere recieving full sun in well-draining soil.
Where to buy:

With their fast growth and mid-summer blooms; Escallonia produce very fast results and are extremely easy to take care of!
Since salt-laden gales don't damage them, they are a great choice to plant near the coast.
These trees can be pruned regurlarly but it is especially important to do so once flowers have faded to ensure flowering the following summer.
Most flowers come in shades of red or pink, but there are one or two excellent white-flowering varieties to look out for. 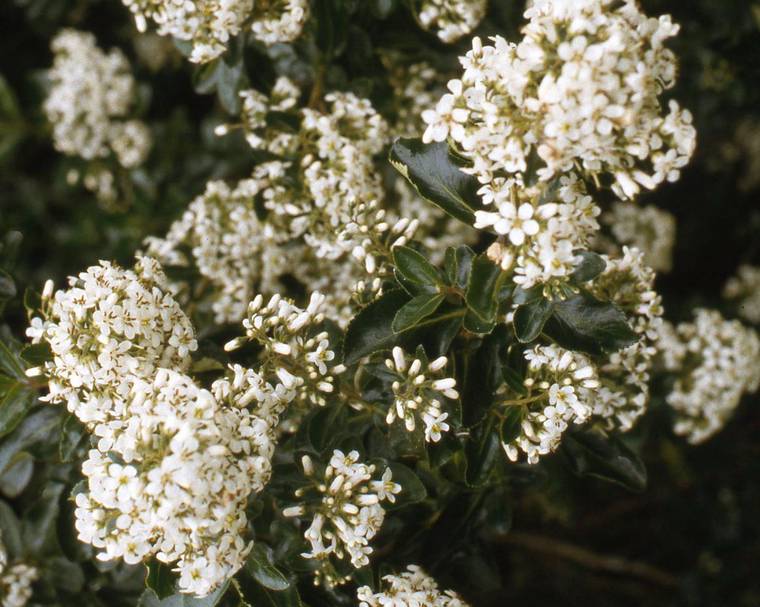 Escallonia x iveyii is one of them!
Unfortunately, in some areas, Escallonia suffer from a leaf spotting disease that can cause defoliation. Regular fungicide spraying might check this, but it might be worth having a look around other Escallonia in your area to see whether you might be at risk before buying.
Find a Escallonia for your garden:

Like the Ceanothus, Garrya is another evergreen originating from south-west USA and central America.
They will grow well on poor, well-draining soil, and will tolerate soil with a high lime content and pH. _Garrya elliptica_ 'James Roof'
Unlike the Ceanothus, you can plant Garrya in the shade and would be perfect for training on a north-facing wall.
The long catkins appear in mid-winter and, while not especially colourful, any flower in the garden at this time of year is valuable.
The longest and showiest flowers are on the male plants. It's well worth looking out for one of my favourite varieties - 'James Roof'.
Grown away from a wall, it can get rather large and untidy, so prune just as soon as the flowers fade.

There's a Hebe bush for every day of the year, and most of them are great garden plants.
Not all Hebe are grown for their flowers, and some have very showy coloured foliage.
All Hebes are evergreen and originate from New Zealand. However, many new selections have been made here in Britain. 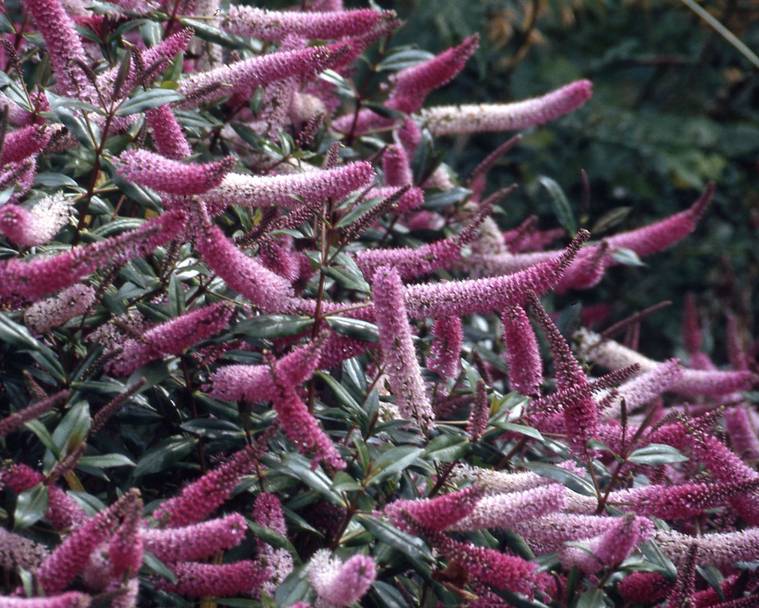 Hebe 'Jane Holden'
The flowering period for this versatile evergreen bush is long with first blooms appearing on some varieties in spring and continuing right through until autumn.
Flower colours range from shades of white, pink, red, purple and even blue. 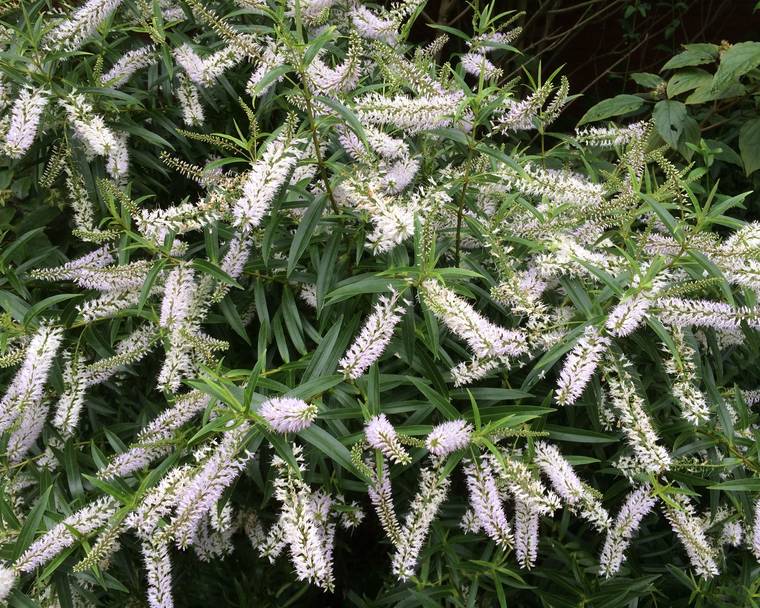 White flowered Hebe salicifolia
Hebes are very wind tolerant and grow rapidly.
As the climate changes, it has become possible to grow hebes in areas that would have been too cold for them 20 years ago.
Many of the small and medium-sized varieties are excellent subjects for growing in large containers. 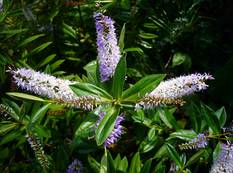 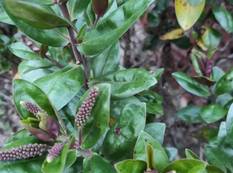 You can prune them back hard in late spring if necessary, and removing spent blooms ('dead-heading') will encourage plants to bloom for longer.

What to Do In the Garden This Weekend - March 12th

The days are getting longer, and we can visibly see signs of spring on our doorstep. The urge to get back out into the garden...

If you’re an impatient gardener or want to get your kids growing – salad is your saviour.