Rain spiders are often seen in or around the garden and house where people are scared by their big and sometimes unexpected appearance.

However, they are not venomous and a bite will be similar to a bee sting. Interestingly, these spiders were previously listed as potentially dangerous. Tests with guinea-pigs were performed and found that they died after three minutes after a bite. Consequently, the guinea pigs died of shock and not spider venom. Although they are considered harmless to humans, they will lift their two front pairs of legs and show their chelicerae (mouthparts), to scare off any potential enemies.

Another common phenomenon often observed in the garden, is the egg sac which is constructed by the female spider. This is common in the months from November to April. The egg sac is a roundish bag made of silk with twigs and leaves woven together with a size of up to 100 mm.

Egg sac
The construction of this egg sac and the laying of the eggs take up to 5 hours. The eggs hatch inside and are protected within the egg sac. During this period, the female guards the egg sac aggressively. Therefore, when you work in the garden, do not touch the egg sac, because the female will defend her brood and will bite to protect it. After 21 days the spiderlings will chew their way out of the egg sac. A female spider can construct about 3 egg sacs in her 2-year life.

Fly on camomile
These spiders feed on a variety of insects, which include flies, moths, grasshoppers, crickets, etc. They also feed on lizards and are often called lizard-eating spiders. They are known as rain spiders because they take shelter from the rain. That is why you often see them inside homes before and during rainy weather.

Another common phenomenon seen in gardens is the spider-hunting wasp, a pompilid wasp (Tachypompilus ignites) which paralyze the rain spider with a sting. The wasp will drag the spider to her burrow in which she will lay an egg.

Sometimes people are frightened by the old skins of the rain spiders, because they look almost identical to the real spider, except that the abdomen is crumpled. The rest of the old skin is completely intact. In order for spiders to grow, they need to shed their old skin, because the exoskeleton cannot expand or grow. The exoskeleton is there to protect the spider. The spider will secrete a moulting fluid between the old and new exoskeletons which makes it easier for them to separate. Younger spider swill moult more frequently.
“

When you see these spiders in your home, please do not kill them.

Rather catch them with a container and release them outside in your garden, so that they can help you with pest control. Spiders are important pest control agents and you can benefit from their existence. 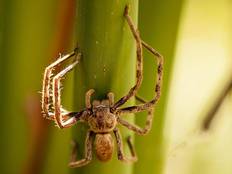 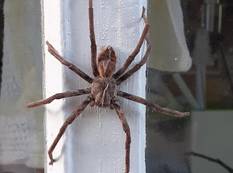 Wish this #rain spider would bring some rain 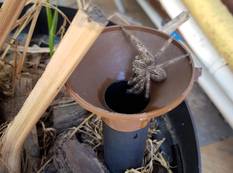 A friendly rain spider (Palystes sp.) on a tree trunk. Still a juveline spider. This one still needs to molt several times before becoming an adult. Rain spiders, especially the adults, can look "scary" for some people. However, they are completely harmless and are essential predators in your garden. They will eat flies, moths, crickets and grasshoppers. #spiders 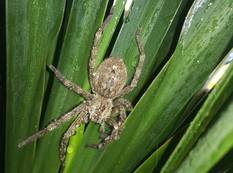 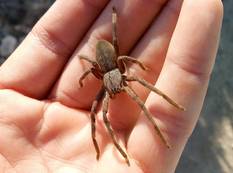 This is a common visitor to gardens around the Cape. This is a juvenile rainspider (Palystes sp.). They look scary, but are harmless to humans. Bites can be compared to a bee sting. They are hairy and often confused with baboon spiders. Baboon spiders' mouthparts (chelicerae) are more prominent, being much bigger compared to those of rain spiders. Rain spiders don't construct webs to catch prey. They only construct egg sacs which are a combination of web and dead leaves. The common name refers to the observations of these spiders - they are active before and after rains. Handle them with care and they won't bite. 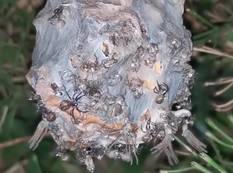 Warning | Not for the faint-hearted! These are little spiderlings chewing their way out of their nest (which moms spider worked on for about 3-5 hours by the way). Every evening the mother will sit on the nest and guards it for the night, in the morning she'd be gone. Rainspider nests are quite commonly seen in the garden in summer to early autumn - keep an eye out for the mother though, they are very protective and aggressive during this time, but otherwise harmless. #lockdownenterntainment #rainspider #gardenpredator #21gardendays

From a distance, the garden appears to be a peaceful and tranquil environment, but take a closer look and you will find that... 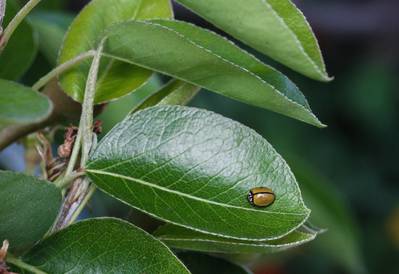