Ancient plants set to reproduce in UK after 60 million years

In what is believed to be the first time in 60 million years, two cycads of the species Cycas revoluta, have produced cones outdoors at Ventnor Botanic Garden in the UK. Botanists say the event is a sign of global heating.

Cycas revoluta, also known as Japanese sago palm, is a type of primitive tree called a Cycad. These trees dominated the planet 280 million years ago. They lived during the Jurassic period along the limestone cliffs of what is now the UK. At the time, the Earth had substantially higher levels of carbon dioxide in the atmosphere. The species Cycas revoluta is native to Japan and is usually only found indoors as an ornamental plant in Britain. In recent years, cycads have begun growing outdoors in the UK. Botanists say the rise in emissions of carbon dioxide may have triggered its growth outdoors in the past few years. 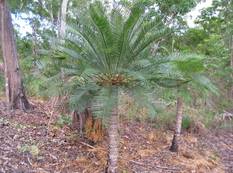 A cycad plant first produced a male cone at Ventnor Botanic Garden seven years ago, but this year different plants have produced male and female cones, giving botanists the opportunity to transfer pollen and generate seed.
Cycas revoluta are from a time before flowering plants, and in their native Japan, they are believed to be pollinated by beetles. The beetle, the natural pollinator for the species, is not present in the UK. Therefore, in Ventnor Botanic Garden, as the plant with a male cone is some distance from the female, the pollen must be transferred by hand.
“This presents us with an exciting opportunity to transfer pollen and generate seeds for the first time in the UK for 60 million years,” said Liz Walker from Ventnor Botanic Garden.

The plants are growing on the sheltered undercliffs of Ventnor Botanic Garden on the Isle of Wight. The garden is on average five degrees warmer than the rest of the UK mainland, making it the second warmest part of the UK after the Isles of Scilly.
However, according to Walker, even though the area is warmer than the rest of the UK, it is clear that global heating is responsible for the changes. “This can be seen as further evidence from the plant kingdom of climate change in action. Certainly this sort of plant could formerly not be considered hardy in the UK; the recent heatwave has contributed to the individual cone growth,”.

Chris Kidd, the curator of Ventnor Botanic Gardens stated that the growth of the cones are: “a strong indicator of climate change being shown, not from empirical evidence from the scientists but by plants.” According to Kidd, the heatwave of last summer and this year’s high temperatures have caused the plant’s production of cones, with several milder winters also contributing to this. Kidd stated: “It’s not something that’s happened with a short-term mild spell. It’s a longer-term warming which is making these things happen,” he said. “Thirty years ago we couldn’t have grown them. But these plants have been growing out of doors here in the gardens for 15 years, going through their natural cycles.”
This slightly warmer location on the Isle of Wight is perhaps an indicator for things to come. Kidd added that: “We see the undercliff here as being a predictor for the wider British landscape in 20 to 30 years time.”
Many species native to the UK are likely to struggle with this ongoing climate warming.
Free download for your phone or tablet

The Duchess of Cambridge Opens New Garden at RHS Wisley

Her Royal Highness, The Duchess of Cambridge has opened a new children's garden at RHS Wisley.

In a world of convenience, it is easy to forget how some pursuits were just a little more cumbersome two or three decades ago...

History is in the walls of Borthwick Castle. The Scottish fortification was once the refuge for Mary, Queen of Scots. In times...