How to Water Your Baskets

This summer, the RHS is conducting a series of experiments to discover the best way to water hanging baskets.
The recently recruited garden water scientists will be trialling ten different watering techniques to get the best-looking flowers while using the least amount of water.
Previous research from the RHS has suggested hanging baskets can survive on as little as one cup of water a day. However, most of the water added runs out the bottom, meaning the roots lose moisture far quicker than if they were in the ground.
When surveying gardeners, they also found that three-quarters want to know how to water baskets, with 80% also saying they prioritise sensible water usage.
Janet Manning, Water Management Specialist at the RHS, said: 'Hanging baskets provide much-needed splashes of colour but go through periods of wet and dry far quicker than other planting displays.'
The aim is to show gardeners that they don’t need to be saturated throughout the summer months and can survive on a minimum amount of water if applied correctly.'
The results, expected in October, will be based on a measure of water use and retention by weighing the baskets – one litre of water weighs 1kg - alongside an evaluation of their aesthetic appeal. 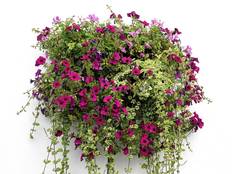 How to Care for Hanging Baskets

A new report from the Digital, Culture Media and Sport Committee has suggested that the government should launch a 'UK Garden City' initiative, to support garden tourism and maximise economic benefits.
The recommendations are partly bases on evidence collected at the RHS Chelsea Flower Show, where members from the National Trust, RHS, Royal Parks, Visit Britain and Royal Botanic Gardens, Kew were questioned about how gardens contribute to the economy, attract visitors and what support the government can provide.
They found that gardens have more economic potential than the £3 billion they currently contribute to the UK's economy. The report also called for gardens to be formally recognised as part of the UK's creative sector.
Recommendations include launching a 'UK Garden City' competition, as a counterpart to the City of Culture initiative, before the end of 2020.
They also suggest a new task force, including representatives from the gardening sector and VisitBritain to organise garden tourism marketing activity.
Free download for your phone or tablet

Nominations have been announced for a special celebration for the 25th birthday of the National Lottery.

An Apple A Day and Stronger Protections for the Environment

Scientists have an explanation of why an organic apple a day might keep the doctor away.

The findings, reported initially by BBC environment analyst Roger Harrabin, were published by the Office for National Statistics.