Government Set to Ban Peat Use in Gardening by 2024 The government is to consult on banning peat in gardening by 2024 – after ministers admitted that voluntary efforts aimed at ridding garden centres of peat-based compost had “not delivered”.
In a bid to protect wildlife-rich peatland ecosystems, which play a crucial role in storing carbon dioxide and slowing climate change, the Department for Environment, Food and Rural Affairs (DEFRA) unveiled plans to set “absolute deadlines” that would outlaw the sale of ‘peat and peat-containing products’ to amateur gardeners.
The government had challenged garden centres to stop selling peat-based compost by 2020, but the deadline fell by the wayside. DEFRA says the amateur gardening sector still makes up 70 per cent of peat use, with two-thirds of peat sold in the UK imported from Europe.
Before the launch of DEFRA’s England Peat Action Plan 2021, the Committee on Climate Change advised the government that peat imports, sales and harvesting should be banned by 2023. Pictured: Wetland habitat is where peat is typically extracted from

The good news is that amount of peat in compost sold to gardeners hit a historic low for the second year running in 2020. According to the Horticultural Trades Association, peat content in compost dropped from 52.9 per cent in 2015 to 35.5 per cent in 2020. In another landmark move, Irish peat giant Bord Na Mona announced this spring that it had ended peat harvesting.
However, the entire UK horticulture sector still used whopping 2.3 million cubic metres of peat in 2020 (down from 2.8million cubic metres in 2011). With BBC Gardeners’ World presenter Monty Don having described peat harvesting as “environmental vandalism” and urging gardeners to go peat-free, why can’t peat be phased out immediately?
Compost expert Steve Harper said there isn’t currently two million cubic metres of eco-friendly alternative materials available to replace peat. He warned that bringing in a peat ban too quickly could lead to reduced compost availability, risking the price of a bag more than doubling.
With peat alternatives often comprising wood fibre and bark, Steve pointed out that the cost of sawn timber has gone up by more than 30 per cent since last summer due to competition from the building industry and demand for wood for subsidised biomass energy generation. In addition, supplies of green compost – a core ingredient in some peat-free composts, were hit last year when councils stopped collecting garden waste during the lockdown, fuelling shortages of eco-friendly alternatives.
An industry source pointed out that coir, a peat-free ingredient that’s commonly shipped from Sri Lanka and India, had risen in price by up to 20 per cent due to the soaring cost of global shipping, placing further strain on efforts to bolster supplies of affordable peat-free compost.

Vision of a peat-free future?

The Garden Centre Association (GCA), which represents 200 garden centres, said it supports the need to remove peat from amateur horticulture and “believes this is possible by 2025” – but pointed out: “This is subject to the availability of quality peat-free composts to meet demand.”
Optimism is prevailing at the Royal Horticultural Society, too, which said it is 98 per cent peat-free at its gardens and is “committed to being 100 per cent peat-free across all operations by 2025.” The RHS stopped selling peat-based compost in 2019.
An RHS spokesman said trials focusing on propagating heather without peat had proved successful while more challenging work is underway to grow carnivorous plants in peat-free compost. Additionally, the RHS will trial sphagnum moss that has been grown as a crop to investigate its potential to replace peat. Pictured: Bricks of peat drying in the sun
At charity Garden Organic, Dr Anton Rosenfeld pointed out that the ongoing harvesting of peat and the resulting release of carbon gasses contribute to the climate emergency. Anton said: “Work by the RSPB showed that the poor condition of our peatlands emits the equivalent of five per cent of the UK’s greenhouse gasses every year – more annual emissions than all the HGVs on UK roads.”
RSPB senior climate change policy officer, Dr Olly Watts, said any peat ban should include the sale of peat-grown plants, pointing out: “B&Q switched to peat-free bedding plants years ago.”
Free download for your phone or tablet

When mosses and other plants in acidic waterlogged swamps die, they only partially decompose. They form a thick chocolaty...

Peat use in horticulture has been a contentious issue for over 30 years. Until recently the arguments have revolved around... 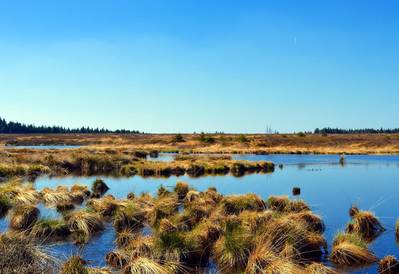 Where in the World: Peat

Peat is a diverse mixture of partially decomposed plant material that has accumulated in a waterlogged environment with an...