For those of us who love the woods, are a constant source of wonder. Towering forest giants can make you feel tiny wherever you are, but some dwarf the rest.
Some of the tallest trees on Earth can be found in the inaccessible tropics of Borneo and the ancient forests of Tasmania. Europe's tallest trees are over 20 stories high but are all non-native species from wilder parts of the world. But none of these can match the stately grandeur and cathedral awe of the old-growth redwood and sequoia forests on the Californian coast - the ancient kings of the forest.
These trees are genuine giants. The grandfather of them all, a magnificent coast redwood called Hyperion, stands a full 20m higher than London's Big Ben or the Statue of Liberty in New York. It's hard to grasp the true scale of these towering titans, but hopefully this infographic can help our tiny human minds comprehend the enormity of these trees. 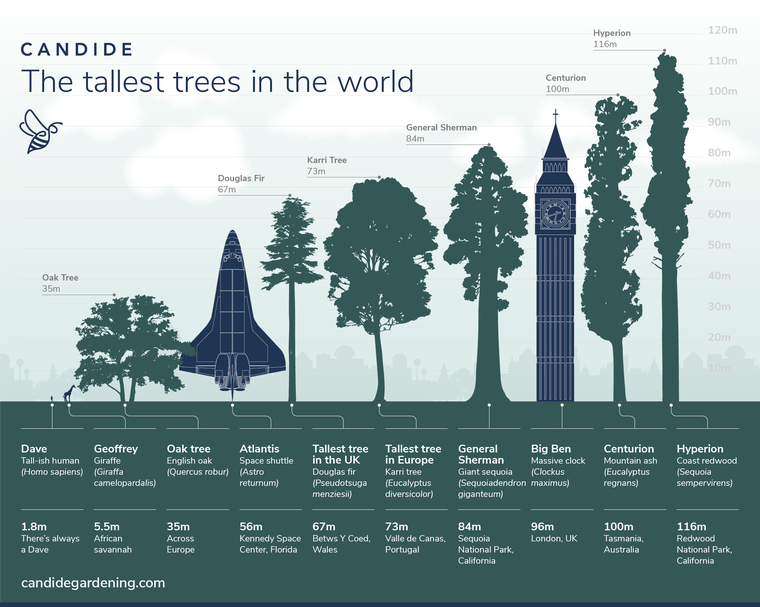 You can view a larger version of this infographic here.
And feel free to share the infographic if you want to! We're releasing it under a CC BY-SA 4.0 creative commons license, which basically means you can use it for whatever you want, so long as you link back to Candide.

Its exact location is a closely guarded secret, but we know that Hyperion is a coast redwood (Sequoia sempervirens) in Redwood National Park, California.

The tallest tree of all was only discovered in 2006, by naturalists Chris Atkins and Michael Taylor. It was later climbed by Stephen Sillett, who dropped a tape measure from the top and recorded Hyperion's official height as 115.55m, taller than any other tree on the planet. 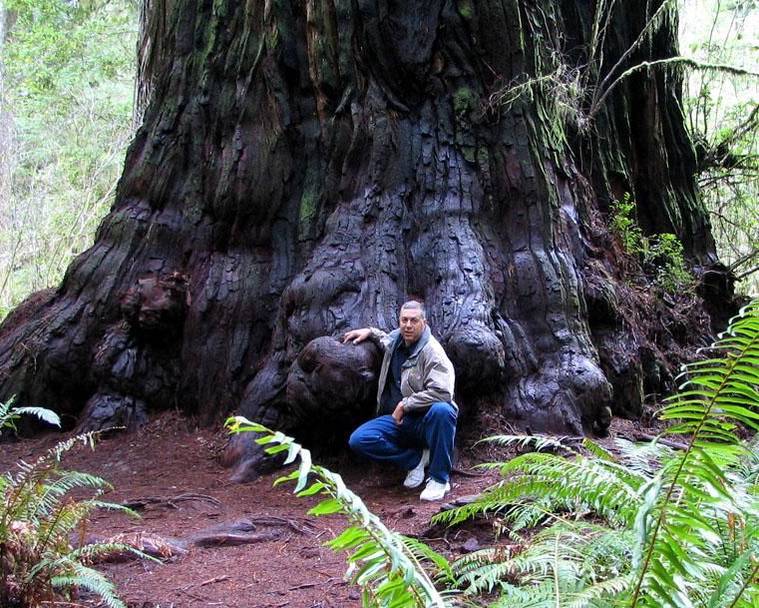 Arborist Mario Vaden in front of a large coast redwood in Jedediah Smith Redwoods State Park, California
Hyperion is already somewhere between 600-800 years old and still growing. Barring damage from wind or woodpeckers, it should keep doing so for centuries to come.
Other exceptionally tall redwoods are currently shorter than Hyperion but growing at a faster rate. So while Hyperion holds the crown for now, it's likely to be overtaken in the next few decades. It will therefore probably be a different tree that breaks the 400 foot barrier for the first time since logging decimated these forests. 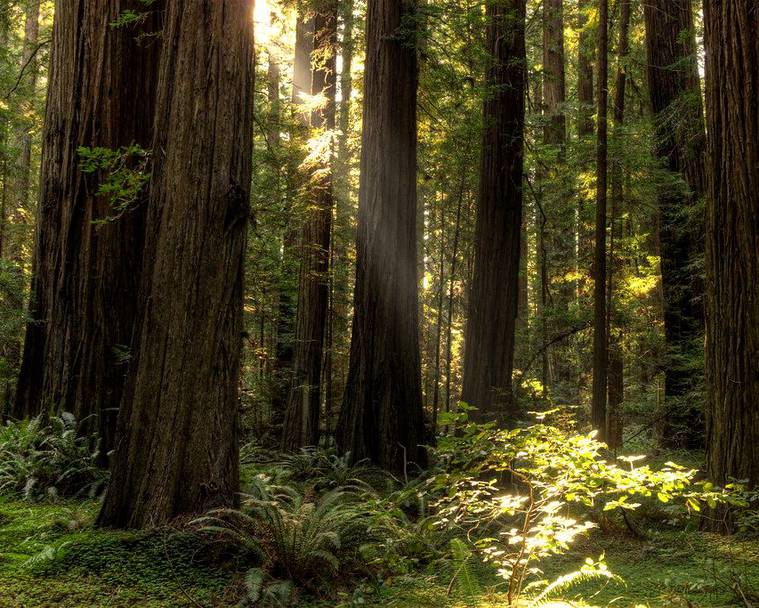 A grove of redwoods near Avenue of the Giants, an area with lots of very tall trees! Photo by Ryan Grayson under CC BY-NC-ND 3.0

Another magnificently named goliath, Centurion is a mountain ash (Eucalyptus regnans aka swamp gum) located in the untamed wilds of Tasmania.

Having grown 80cm since its previous official measurement a few years before, in 2018 Centurion was measured at an incredible 100.5m. At the time, that made it the only known tree taller than 100m outside of North America.
As redwoods are technically softwood trees (defined by their seeds rather than the actual hardness of the wood), Centurion also holds the honour of being the world's tallest hardwood tree. And it was probably even taller in the past. Signs of a broken branch near the top of the tree suggest that Centurion could grow even higher in future. 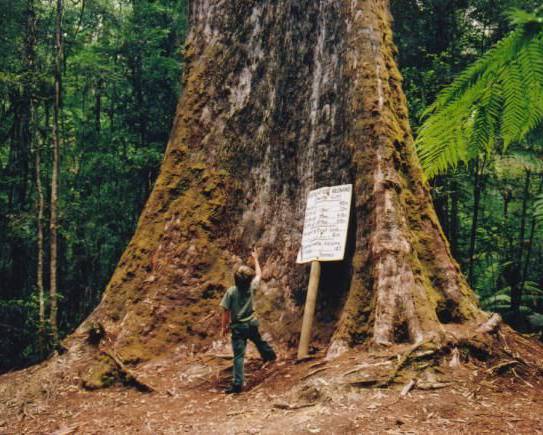 A small child gazing up at a 92m tall mountain ash/swamp gum that was once thought to be the tallest in Australia. Photo by T Taylor under CC BY-SA 3.0
Many of the world's most impressive trees have grand names, but Centurion's came about by coincidence. Rather than being named for its towering 100m height, the name was reserved for the 100th monumental tree recorded, as part of a wider Tasmanian tree-measuring project.
Australia's crowning woodland glory has only survived long enough to grow so tall by chance. Most of the surrounding area has been heavily logged, and forest fires regularly sweep through these remote regions. A bushfire in February 2019 came close to ending it all, badly charring Centurion's base despite heroic efforts to save the tree from harm. But it's not all bad news. Eucalyptus trees have evolved alongside the ever-present threat of fire, and Centurion remains stable and healthy, even with its blackened trunk. 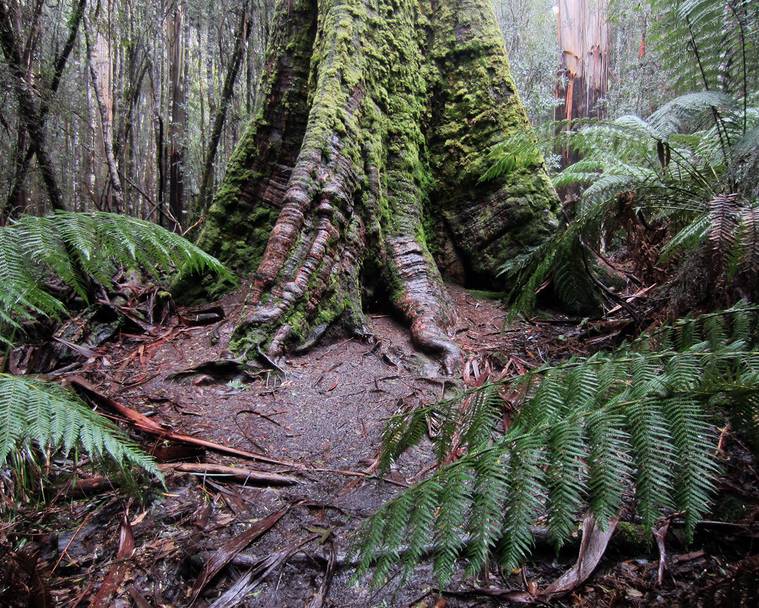 Buttress roots at the bottom of a huge swamp gum in Tasmania. Photo by ccdoh1 under CC BY-NC-ND 2.0 But what makes this one any more remarkable than the others? It's certainly not the tallest sequoia around, but General Sherman is nevertheless a giant among giants.

At around 2500 years old, General Sherman is ancient in human terms, but a relative youngster next to the 4,850-year-old bristlecone pine known as Methuselah. Still, this mighty sequoia has lived long enough to reach a neck-breaking height of 83.8m, although that's significantly shorter than both Centurion and Hyperion. And while a diameter of 7.7m is notable, it's got nothing on the widest baobab and cypress trees.
But the whole is greater than the sum of its parts. Put these measurements together, and you discover that General Sherman is the largest tree on Earth. With an estimated bole (trunk) volume of 1,487m3, this colossus is thought to weigh almost 2,000 tonnes. And that's even after it lost its largest branch in January 2006 – this was over 30m long and 2m wide, bigger than most trees. 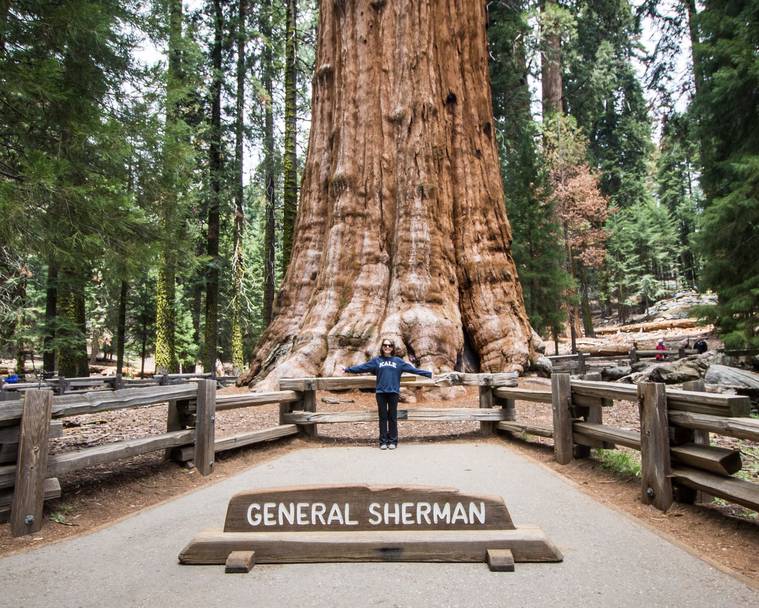 The Tallest Tree in Europe

Valle de Canas in Portugal has suffered forest fires in recent years. However, the renowned Karri Knight tree has fortunately escaped unharmed and remains the tallest reliably measured tree in Europe at 72.9m. Remarkably, Europe's tallest tree is thought only to be around 120 years old, so it could well grow significantly taller in the future. Its antipodean cousins have been known to reach heights of about 90m in ideal conditions, so who knows how tall the trees of Valle de Canas could become?
There's a chance that they'll never be the tallest trees in Europe though – it might just be that we haven't measured the highest ones yet. There are rumours of giants in the remote forests of the Caucasus, on the eastern edge of Europe, some of which could be up to 85m tall. We're just waiting for an expedition to survey the region's trees before anything can be confirmed. 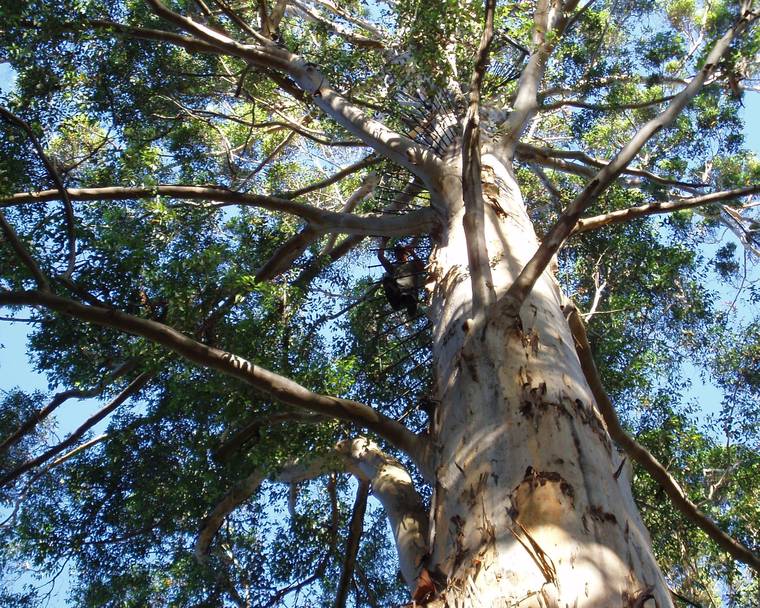 An Australian karri tree used as a fire lookout thanks to its great height. Photo by Steel Wool under CC BY-NC-ND 2.0

The Tallest Tree in the UK

Betws y Coed is a well-known honeypot village in Snowdonia National Park and a regular tourist stop en route to Snowdon, the highest peak in Wales. What most people don't realise is that they're also going past the tallest tree in the UK, a proud coast Douglas fir (Pseudotsuga menziesii) just outside the village. 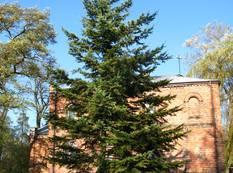 Ready to produce the next generation of giant Douglas firs. Photo by Cody Hough under CC BY-SA 3.0
At 67.5m, it's an undeniably large tree, but the coast Douglas fir is another American giant that can reach staggering heights of 100m+ in its native habitat. A glen near Inverness in Scotland holds another Douglas fir that's not far off the record at 66.4m. And there must be something special about that particular glen, as it's also home to the tallest larch and lime trees in the UK.

These might not be the tallest trees yet, but every tree starts somewhere!

Could There Be Taller Trees out There?

Hyperion was only discovered in 2006, and Centurion in 2008. Redwood and mountain ash have been heavily logged in the past, losing the vast majority of their forests and the largest individual trees. So while there were almost certainly taller trees in the past, could any still be out there? 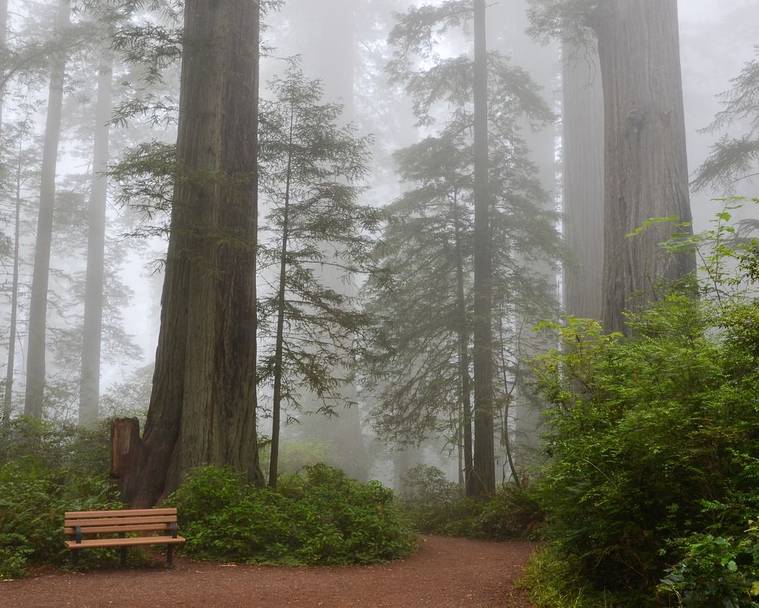 Could more giants be hiding in a remote area of the misty forests on the US west coast?
It's certainly not impossible. Giant trees grow in old-growth forests, which tend to be mostly undisturbed and inaccessible by their very definition. An extra tall behemoth could well have escaped detection, especially if its base was located in a hollow lower than the surrounding ground. Then it could potentially be taller than the trees around it without making an impact on the skyline. 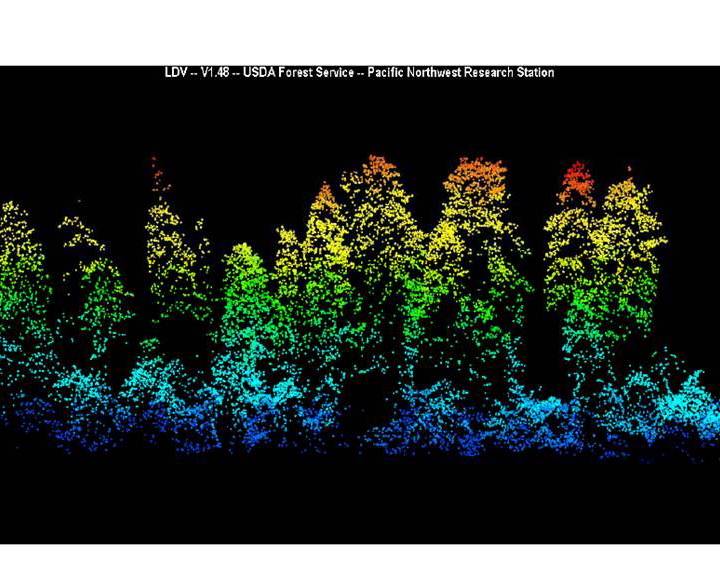 LiDAR image of Douglas firs being surveyed in the Pacific Northwest. Photo courtesy of Oregon State University under CC BY-SA 2.0
But these kinds of discoveries are becoming less likely by the year. LiDAR technology uses a series of sophisticated laser measurements to build an accurate 3D map of the ground and trees below. As LiDAR surveys more of the earth's surface, we can be increasingly confident that the tallest trees have already been found.
LiDAR is still uncovering some surprises though. The world's tallest known tropical tree was only found this year, in the relatively well known Danum Valley conservation area in Borneo. The exceptional yellow meranti tree (Shorea faguetiana) is the only tropical tree ever known to have broken the 100m barrier, standing less than 80cm clear of the airy milestone. So who knows what else might be out there? 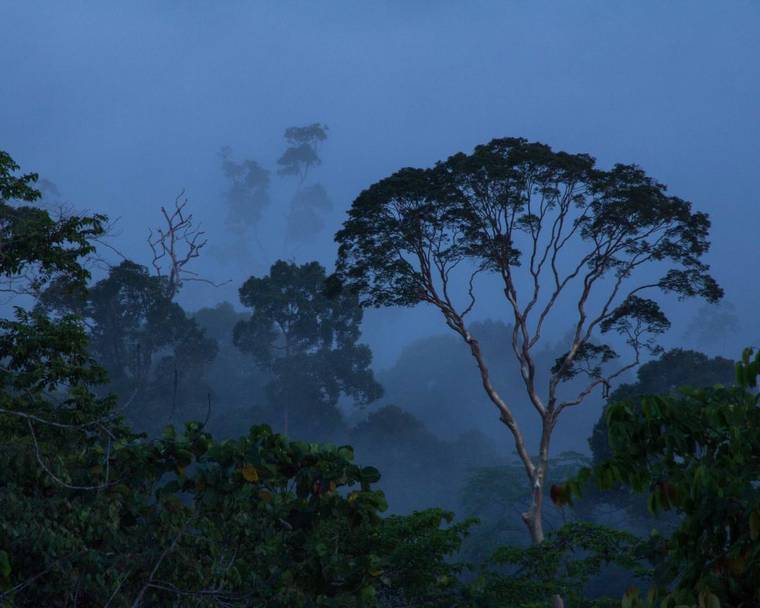 The Biggest Trees Ever

There is no doubt that today's biggest trees wouldn't have made the cut in centuries past. Around 95% of the ancient redwood forests of western North America have been logged, and tales tell of giant trees that would have towered over the monarchs of today. No doubt exaggeration played a part in some of the recorded measurements, but not all of them can be discounted.
Two trees, in particular, are worthy of consideration. The Crannell Creek Giant was a coast redwood (like Hyperion) that was around 20% larger than General Sherman, a giant sequoia. This leviathan was tragically chopped down in the 1940s. 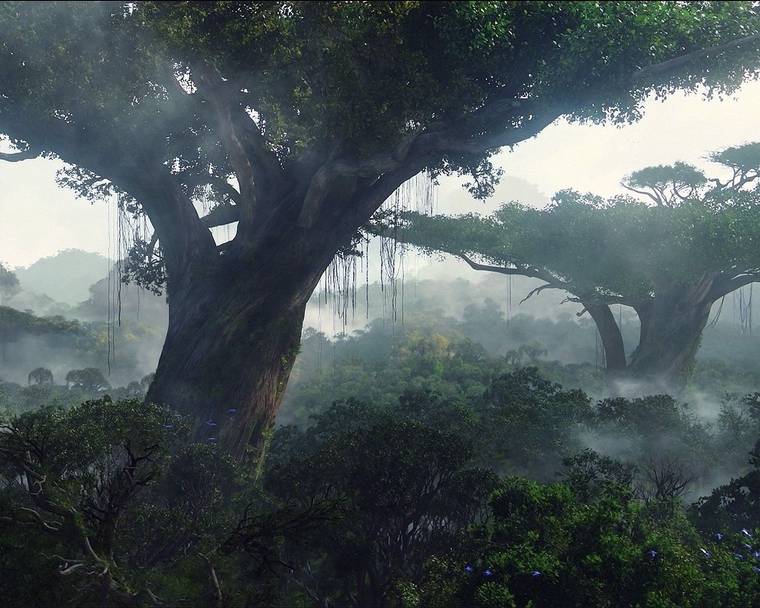 We've never had anything quite as big as the trees in Avatar though...
But there have been even bigger trees in the past. The largest single-stem tree ever recorded was the Lindsey Creek Giant, another coast redwood. It fell in a storm in 1905 but was estimated to have a trunk volume of at least 2,550m3, approaching twice the size of General Sherman. This vast tree had a diameter of nearly 6m at the height of 40m, and almost 3m at 75m. It may have also been a few metres taller than Hyperion.
The Lindsey Creek Giant was the last true titan, but if we keep our forests safe from harm, such giants could one day rise again.

Find yourself the perfect tree on Candide! Do Trees Have the Power to Heal?

They clean the air we breathe and the water we drink, they slow the flow of water to reduce flooding, they provide crucial...