ChirpyBirdFoods
Peanut Feeder and 1kg Whole Peanuts
£14.99
Free delivery
As a child, I was so excited when I’d come across a centipede in the garden. It was usually just a passing copper flash as it darted back under a rock or plant pot, but I always thought they were amazing creatures. Even as an adult, I love seeing them, even the hordes that seem to live on my rooftop garden. Millipedes are not viewed quite so favourably by gardeners but are still a fascinating minibeast.
For world soil day, I've written an article on these many-legged beasts to better understand what benefits or problems can bring to your garden. Check out Nina's article for a look an excellent overview of what else lives in the soil!

Distinguishing between the two insects is quite easy, despite their shared penchant for segmented bodies with too many limbs. Centipedes have only one pair of legs per body segment, and don’t have the hundred that the name suggests (originating from Latin centi- 'hundred' and pedis 'feet').

Millipedes do have closer to a hundred legs, though their name, confusingly, means thousand-footed. They have two legs per body segment and generally move much slower than millipedes, feeding mostly on decaying vegetable matter. 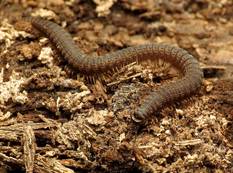 Both centipedes and millipedes like damp, dark places so you will often see them together. 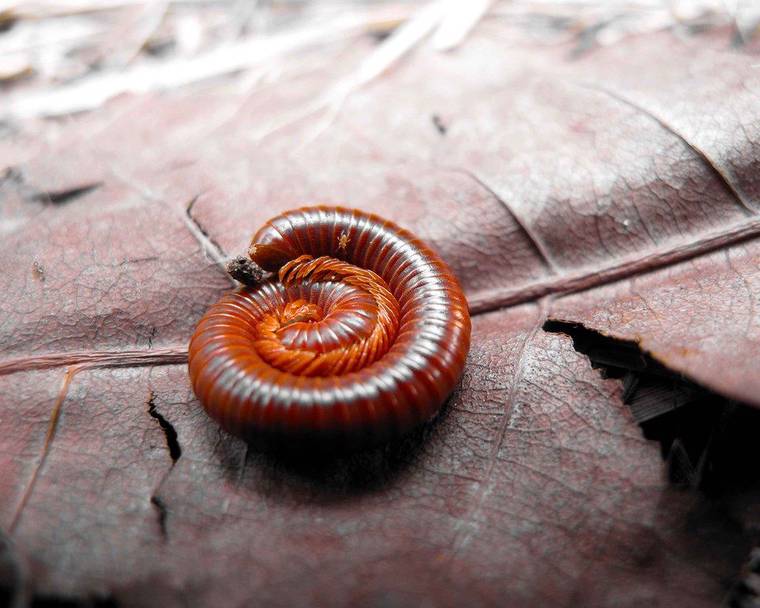 Whereas a centipede will run for cover, millipedes curl up when threatened, making identification easier.

Compared to the giant, venomous species seen abroad, our native species seem somewhat tame in comparison. Yet make no mistake, they are still ferocious, active hunters.
The most frequently-encountered centipede in the UK is the common, or brown, centipede. Around 30mm long, this familiar chestnut brown one will usually dash for cover as soon as you upturn a pile of wood. It hunts smaller insects, many of which are likely to harm our plants, and so is a useful predator. 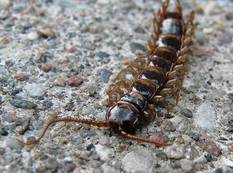 Our common or brown centipede, Lithobrius forficatus.
Other common species that you're likely to find include the soil centipedes, which you’re most likely to see when you dig over the earth. They may appear a little like wireworms, but they’re entirely harmless to plants. Overall, centipedes should be considered beneficial to the garden. 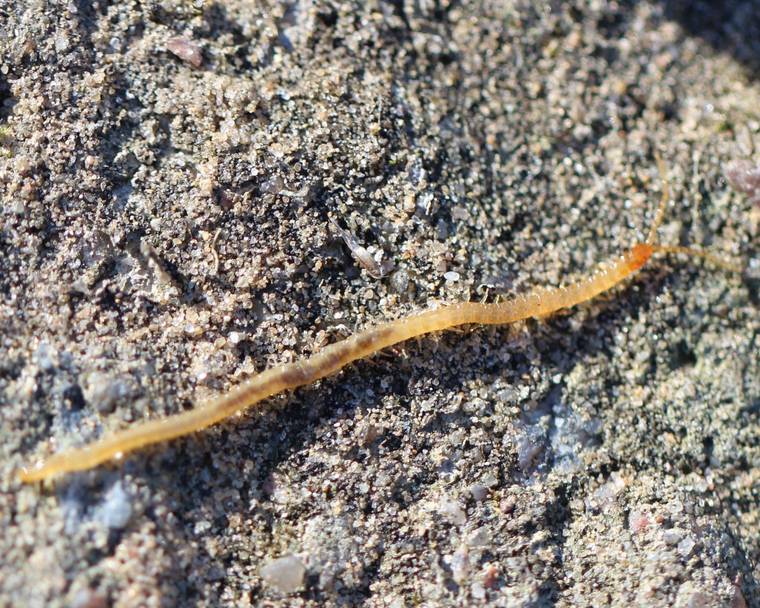 A species of soil centipede, Geophilus, showing the orange head and paler body.

Millipedes, on the other hand, are a mixed blessing.
They are an essential part of garden ecology as they break down detritus, but can also attack potatoes, strawberries, peas and cucumbers.
More often than not, millipedes don’t cause initial wounds as their jaws are very weak and incapable of damage, but they will expand upon it. For this reason, control of the original pest (usually slugs or wireworms) is advised rather than the millipedes themselves.
They can also attack small seedlings, in much the same fashion as woodlice, with which they often coexist.
There are two distinct types of millipede found: the flat-bodied species, which look like drab, slow-moving centipedes; and the pill and snake millipedes, which have cylindrical bodies and move like tiny snakes. 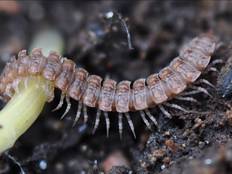 The type of millipede to cause the most damage to crops and flowers is the spotted snake millipede. It is quite pretty, with a long pale body lined with red dots and can often be found alongside our most common species, the white-legged snake millipede (main image). 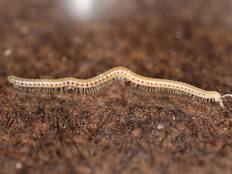 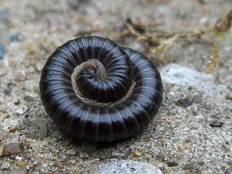 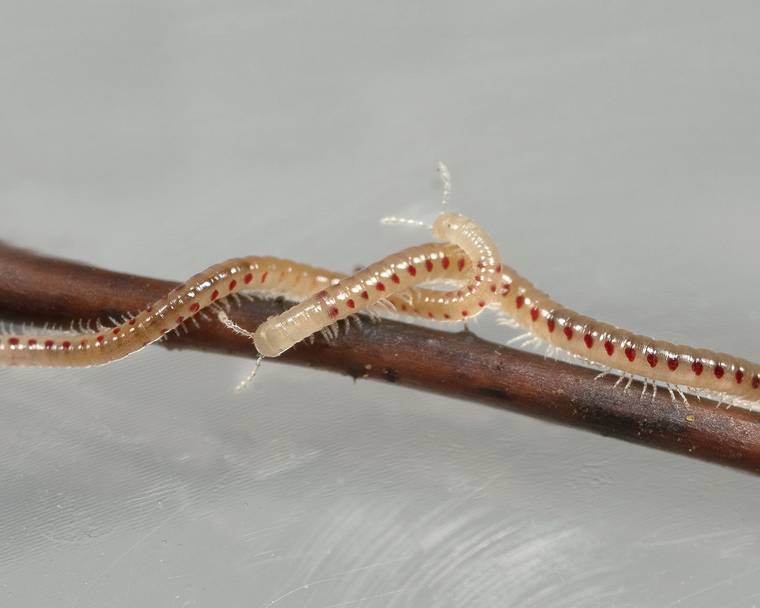 The spotted snake millipede is not really a pest, but often a secondary problem to slugs and beetle larvae.
The pill millipede looks very much like a pill woodlouse. But it has two legs per section, rather than one like its isopod counterpart. 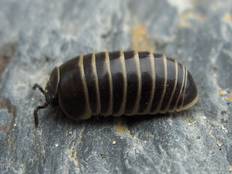 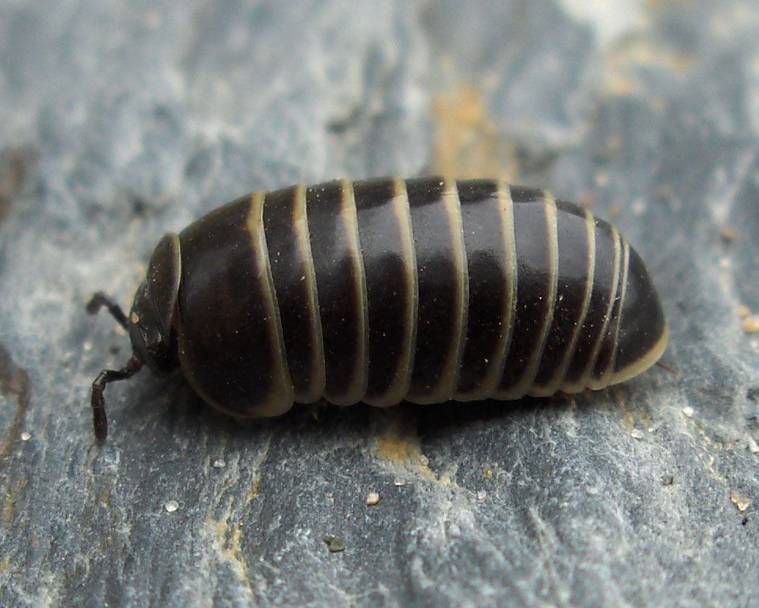 The pill millipede as the ability to roll up tightly into a ball when threatened, hence its name.
For World Soil Day we are creating a week worth of content to educate and inspire gardeners into loving the soil, tardigrades and the untold truths about soil. We want to empower everyone to take ownership over their own plot of land to help the environment, prevent climate change and to help meet UN Global Goals.