How to Defend Against Vine Weevil

This little beetle has recently become my arch-nemesis. Nine times out of ten, it's not until a plant suddenly dies that I notice the damage its caused. This year, I'm more prepared than ever and wanted to share my tips on how to defend your plant babies from the onslaught of the vine weevil.

Ivy leaves showing the distinctive damage made by adult Vine Weevil
At this time of year, the adult beetle is happily munching its way through the night, leaving leaves looking tatty but doing little harm to healthy plants. They particularly like rhododendrons, hydrangea's, euonymus, bergenia, primula's and strawberries, but they will eat the leaves of most herbaceous shrubs and perennials.
On a warm evening, head out with a torch and check plants that are showing signs of damage. You should be able to pick off the beetle but be quick - they're fast. It might also be worth putting sheets under plants before shaking them to catch any vine weevils you might have missed.
Look under containers and pots, especially in greenhouses.
Having collected them up, you'll need to dispose of them in whichever way you see fit. 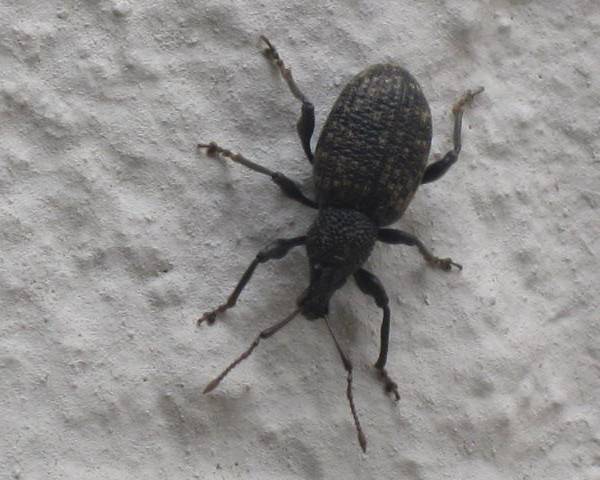 The damage that adults inflict is minimal, but their eggs are a much bigger problem. Every adult female can reproduce asexually, producing about 300 eggs per year, and although they are unable to fly, they can walk up to three miles and are great climbers. Climbing enables them to deposit their eggs in our plant containers, where the newly hatched grubs can eat their way through plant roots.
Plants in mixed borders suffer less damage, as natural enemies will prey on the beetles and grubs before they can eat a plant to death. Wildlife such as birds, frogs, toads, shrews, hedgehogs, ground and rove beetles will all make a nice lunch of this pest. Encouraging them into our gardens is a great way to get rid of this common problem.
However, large infestations of grubs can destroy any Heuchera, primulas, strawberries and young fuchsia plants. I've even known them to munch through a recently planted lavender patch.

Placing a container in a tray of water will help prevent vine weevil infection as they can't swim. Make sure they can't clamber across from a neighbouring plants foliage.
In summer, leaving the greenhouse open for ventilation can also open it up to infection. Sticky barriers, such as tape with glue spread over it, can prevent beetles from climbing up the legs of benches and will provide some protection. And if you already have grubs in your pots, it will catch the emerging adults on their way out.
Download the free Candide App to get help and answers from a warm community of gardeners

Having caught as many adults as I can over the summer, I'm now preparing to deal with the hatching grubs. The soil temperature from August until early Sept is warm enough (5-20C) for a nematode called *Steinernema krasei* to reproduce and prey on vine weevil larvae (grubs) before they do too much damage.
The nematodes kill the larvae by injecting bacteria inside the larvae's body. The bacteria then multiply and cause blood poisoning, which leads to the death of the grub. Their tissue is then eaten by the nematodes, which then multiply and can start searching for a new host.

The slightly curved white larvae of Vine weevil
S. krasei can be bought in sachets from online companies or retail outlets for use in pots or the garden. It can be used safely on edibles, especially useful for me as I want to protect my newly planted strawberry bed. If you're lucky enough to live in warmer regions, there is also another nematode called *Heterorhabditis megidis* available which thrives when the soil is between 12 and 20C (54-68F).
The downside is that they don't work as well in dry soils. You will need to apply water during dry spells to enable the nematodes to be able to "swim" through the soil's water looking for new hosts. If you have heavy, sticky soil, nematodes might not work as well for you as they prefer an open soil structure they can move around in.

Before emerging from the soil as beetles in Spring, Vine Weevil grubs burrow down deep to pupate
As part of my ongoing battle, I've placed my nematode order and will be watering them on as soon as they arrive. Even if I manage to get all of them this year, I'll need to repeat next year as new beetles arrive, most frequently on bought plants. It's always worth tipping prospective purchases out of their containers to check.
Free download for your phone or tablet

I know thinking about the long winter months during the summer is the last thing on anyone's minds. But now is the last chance...

For many of us, the arrival of sunny weather presents a window of opportunity for multiplying our plants and the easiest way...

Summer pruning of fruit trees is one of my most favourite gardening activities, and every year, I have to tell myself not to...