Gardening for Charity - Driftwood By the Sea

Written by Max Thrower
At the age of 51, Geoff Stonebanks packed up his North London home to retire to the coast. Having looked at over 140 properties with his partner, they settled on Driftwood in East Sussex, a property with nothing between it and the sea a quarter of a mile away.

A self-confessed gardening novice, since 2007 Geoff has transformed the gardens into a coastal paradise. So much so that they are now a regular part of the National Garden Scheme and have raised nearly £130,000 for charity. Geoff is also the organiser of the Macmillan Coastal Garden Trail, which this year alone has raised £9,153 for the cancer support charity.
We caught up with Geoff to hear more about his journey and hear his tips for people who don't know where to begin.

The majority of the funds raised for charity have gone to Macmillan Cancer Support.
'After two years of getting the house straight, I was bored.' Geoff told Candide, 'The first thing I did was to put a summer house into the garden and even then I had no grand plan.'
Dismissing a garden designer to have a crack himself, Geoff started by levelling out the garden into a patio and then slowly transformed the garden over the next five years.

'People say to me what a beautifully designed garden I have. But it's not designed at all. What I have is a garden that has grown organically year on year when ideas have come to me.'
In 2009, Geoff succumbed to pressure from family and friends to open the garden to the public and opened it up for the local floral competition. Several years and awards later, including Garden News's Gardener of the Year 2012 competition, small garden winner, he decided to try and become a part of the National Garden Scheme. In 2011, Driftwood opened as a trail with three other local gardens.

'As the county organiser left she glanced at my front lawn and said if I was to do something with that we could open up on our own, which is what we did the next year.' Said Geoff, who is now an assistant county organiser and publicity officer for the scheme.
'Because it's so close to the sea, I did a lot of research into suitable plants that were cottagey and would work in a coastal environment. And half of them died. That was my defining moment I think.'

The tranquillity of the garden comes in part from the plants. Inspired from the planting at Highgrove Royal Gardens, Driftwood has over 300 containers, from tulips to hedges, allowing Geoff to rearrange in the autumn, creating a totally different look. As someone who knew little about gardening, this didn't phase the man behind the project.
'I thought, sod the rules.', said Geoff; 'I don't know what they are and I don't want to know what they are. I'm buying plants that I like and I'll plant and look after them in the best way I can. They can sink or swim. But in my experience, 90% tend to swim.'

Whilst raising money to change other people's lives by providing a tranquil space for people to visit, Geoff also recognises the benefits of gardening on his own health.
'There's no question that you feel better being outside, doing something that is rewarding. My mother is now 92 and it's also very therapeutic for her to sit in a garden.'
Geoff's mother is also part of a team of volunteers that sell entry and raffle tickets when the gardens are open.

The rule breaking gardener has no plans to slow down any time soon, and is aiming to make as much money for charity as possible.
We asked Geoff what his one piece of advice would be for anyone wanting to create their perfect garden.
'Don't do what the guide books and people in the know say. Don't worry about the consequences, just go for it. You know what you want to do with your garden. If you look after it, and you love what you're doing, it'll work.'

Be sure to follow Geoff on Candide, and you can find out more about Driftwood By the Sea on his website. 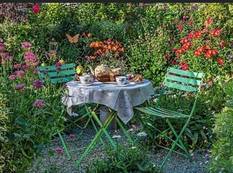 Perennial Supports Gardeners in "Back To School" Season

Perennial, the charity supporting people working in horticulture, has launched a 'back to school' campaign.

Pink grasshoppers, a mutated variation of the meadow grasshopper, Chorthippus parallelus, may look fake, but since being...