When I was asked if I could write about "How to get rid of bindweed permanently" I said yes but only if I could drop the "permanently" - this pernicious plant is one of nature's survivors.
You turn your back for a minute and suddenly it's knee high, twined around anything it can get hold of and reaching for the stars, so to speak. 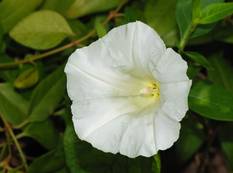 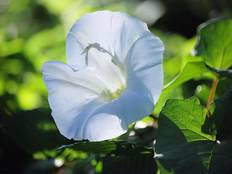 There are two types that we see here in the UK, with a variety of common names including "Wild Morning Glory", "Creeping Jenny" and "Bellbind". To be honest, seeing a mass of their flowers sprawling over a hedge is quite stunning. If only they wouldn't smother and choke the plants they creep up.

Ok, I'm not suggesting we bury ourselves 5m deep and spread out by 2m every year, but understanding bindweeds growth habit & reproduction will help us work out how to fight it.
Bindweed sends out fleshy white runners that grow under the soil until they reach a barrier, such as a plant's root ball, which they will then grow up.
My favourite quote regarding bindweed is from Happy Simple Living's blog post in 2013. 'The multiple roots that grow laterally from the taproot can extend as far as 30 feet (9m). To put this in perspective, imagine George Clooney, Brad Pitt, Henry Cavill, Jon Hamm and Gerard Butler lying head to toe in your garden. Isn’t it helpful to have visual references?'
And even small sections of the root can develop into plants. Shudder!
Let's not even think about its seeds, with their hard cases allowing them to stay dormant in the soil for up to 50 years. The only plus is that Hedge bindweed produces seed infrequently, unlike Field bindweed which seeds freely.

So having studied up on your enemy, it's time to choose your preferred attack.

I'll admit at the beginning of my gardening career I did apply systemic herbicide (chemical sprays) to try and kill this weed. But its tendency to grow right in amongst your favourite plants makes spraying without accidental casualties rather tricky.
I then tried the gell. You know, the one that looks like a roll-on deodorant. But the time it takes to apply it to every leaf put me off very quickly.
Download the free Candide App to get help and answers from a warm community of gardeners

If you do decide to use sprays, applying it when the plant is flowering and in the early evening is most effective, but you may still find you will have to apply a second or even a third dose.
You could also try placing a bamboo cane close to the weed, providing an alternative to grow up. You can then treat with the gell, or as the RHS suggests: 'un-twine and lay on the bare soil or an adjacent pathway before being sprayed'. Place a protective barrier down first to protect anything living.

It is possible to eradicate these weeds in a couple of years, but it takes dedication. Continually removing the foliage and surface roots will eventually use up the energy reserves in the deeper root system, either causing it to perish or grow somewhere else. A multi-pronged attack may be your best bet.

Bindweed will appear in the smallest of spaces where cultural methods are impossible to apply.

There are lots of recommendations to be found online for organic weed controls using household items. However, as a professional gardener, I am not going to recommend anything that has not been approved by the Environmental Protection Agency.
Vinegar is not recommended. Some local councils use DEFRA approved acetic acid (the basis of vinegar). As this acid is a chemical compound, it is not organic. Domestic vinegar from a bottle is not strong enough and has not been proved effective.
Organic weedkiller is usually based on pelargonic acid, a natural fatty acid that breaks down cell walls in leaves without penetrating the root or leaving a harmful residue. Take care when applying as it's non-selective, so make sure it only comes into contact with the weeds you want to go.

My own private battle

I've got a small patch in amongst my Raspberries, so every year I dig down with my knife and slice out as much as I can. But you can guarantee come mid-summer I'll suddenly spot a waving tendril above the canes. In my head, it's saying "Ha Ha" in a very Nelson from the Simpson's way.
So the yearly war continues, and I may need to employ some shock troops; I've read that Russian tortoises are very partial to bindweed leaves. But there is something to admire about a plant that will probably outlive me.
Free download for your phone or tablet

We've all done it - picked up a pot of herbs at the shops and brought them home to watch curl up and die.

A List of Summer Flowering Bulbs to Plant in Spring

For me, planting bulbs is usually an autumn activity. Once the summer flowering annuals have finished and the containers have...