Here are a few friendly and a few not-so-friendly fungi that you could easily switch up...

This article should NOT be used as an identification tool and you should always consult an expert when foraging.

Cantharellus cibarius, or the golden chanterelle mushroom, is a tasty mushroom popular with foragers. The taste has been described as chewy, yet velvety; with flavoursome tones of wood and earth, and a mild peppery finish. The mushrooms are also renowned for their fruity, apricot aroma. Sounds delicious, right?

Cortinarius rubellus, or the deadly webcap is often mistaken for the golden chanterelle due to its attractive orange cap. Additionally, it possesses a similar appearance to any other common brown mushroom, and with age, the cap can begin to curl up, in a similar fashion to the chanterelle.

The Deadly Webcap
The deadly webcap is exactly as horrible as it sounds, as it contains a toxin called orellanine. One ingested, the molecule is slow-acting but somewhere between 3-22 days, the victim begins to experience the first signs of poison. The first appearing ‘flu-like’ symptoms quickly worsen with most cases resulting in renal failure.

Many online sources describe Honey Fungus as a tasty shroom. However, the common name honey fungus refers to a whole group of mushrooms, as opposed to just one species. The group contains a variety of species which can be toxic, or edible. Likewise, the characteristic golden-honey colour can vary depending on the moisture in the environment. 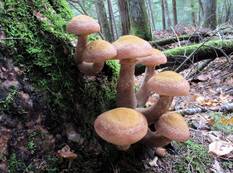 A species of honey fungus
Confusingly, the closely related funeral bell (Galerina marginata) can resemble several species of honey fungus. The funeral bell contains the same primary toxin as the death cap, which is, Alpha-amanitin. It’s been described as the deadliest amatoxin, producing symptoms in its victims within three days. It works by clinging on to important enzymes involved in protein synthesis in the intestine. It prevents the enzyme from doing its real job, causing deadly symptoms in victims. 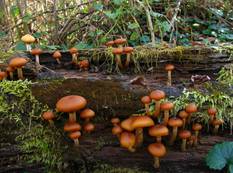 Initial symptoms can begin within 24 hours, with violent vomiting and diarrhoea. These eventually subside, giving a false sense of security. Five days after ingesting, the kidney and liver begin to fail, with ultimate death.

Marasmius Oreades forming a fairy ring
There are several other species of grassland fungi which can grow in ring formations. To make things worse, they can be incorporated within the rings of the edible mushrooms. This can sometimes fool foragers, and that’s where the fool's funnel gets its name. 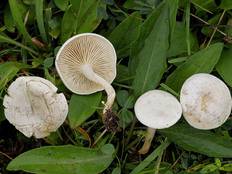 The fool's funnel contains a compound known as muscarine, and although the symptoms produced by this toxin are less severe than in the latter fungi, it can still make you very ill if ingested, with a potential risk of death. Symptoms involve increased salivation, sweating and watering of the eyes; as well as sickness and diarrhoea.

Named for its resemblance to uncooked meat, Fistulina hepatica, the beefsteak fungus, has a meat-like texture and a sour, acidic taste when fully mature. When cut, it oozes red fluid, further mimicking meat. 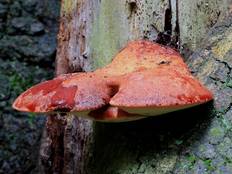 Beefsteak fungi are common parasites of oak and chestnut trees,
Beefsteak fungi could easily be mistaken with Inonotus hispidus, the shaggy bracket. This tree pathogen, commonly parasitising apple and ash trees is bright orange-brown in colour and has a notable hairy upper surface. Unlike the beefsteak, this mushroom is poisonous.

Not native to the UK, Caesar's mushroom can be found in Southern Europe and Northern Africa and are a delicacy in Italy. Their key features are nicely outlined in the video below. 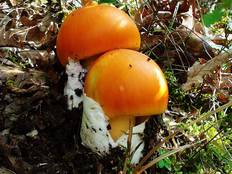 The typical fairy toadstool, Amanita muscaria, the fly agaric, is associated with its bright red cap and white spots. However, mushrooms can change forms throughout the life cycle and this is the most concerning problem with the fly agaric. It's mostly red but can sometimes be orange, with white spots lacking, making it easily confusable with Caesar's mushroom. 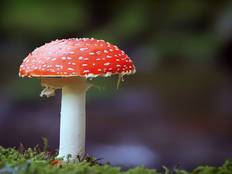 This species forms mycorrhizal networks with several species of tree, including birch. Learn more about this here:

Conclusion: Be aware of the dangers. You can develop identification skills through observation and be inspired by the awesome world of fungi without mushroom munching as the end goal.

For a lot of you out there, thinking about fungi may bring to mind thoughts of poisonous toadstools, delicious edible... 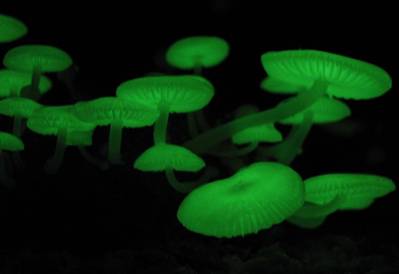 In nature, few things catch our attention in the same way as bioluminescence, the production and emission of light by a living... 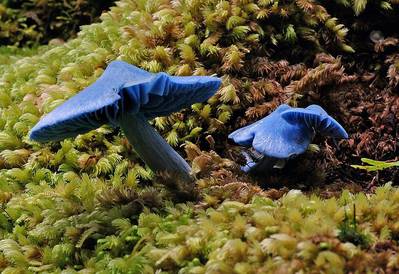 What better way to mark UK fungus day #UKFD than by looking at some of the weirdest, creepiest and most fascinating fungi from...