Hardy Orchids for the Garden 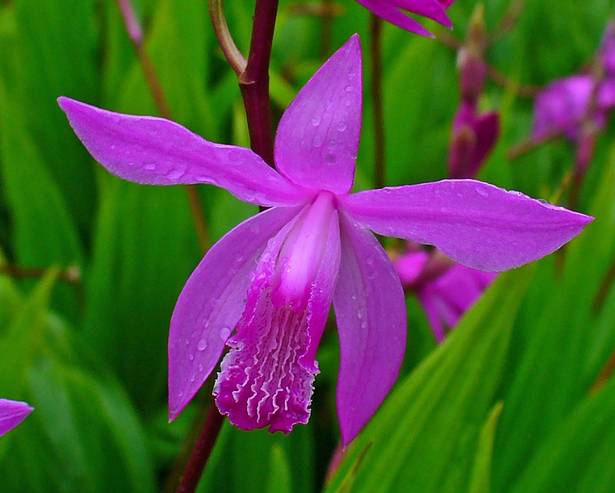 There is something truly charming and indulgent about growing orchids in the garden.
Although they often carry a higher price tag than other garden flowers, modern propagation techniques have made pricing and availability more accessible.
Bear in mind that many ‘hardy’ species are not prepared to put up with wet or prolonged freezing, so always check before investing. 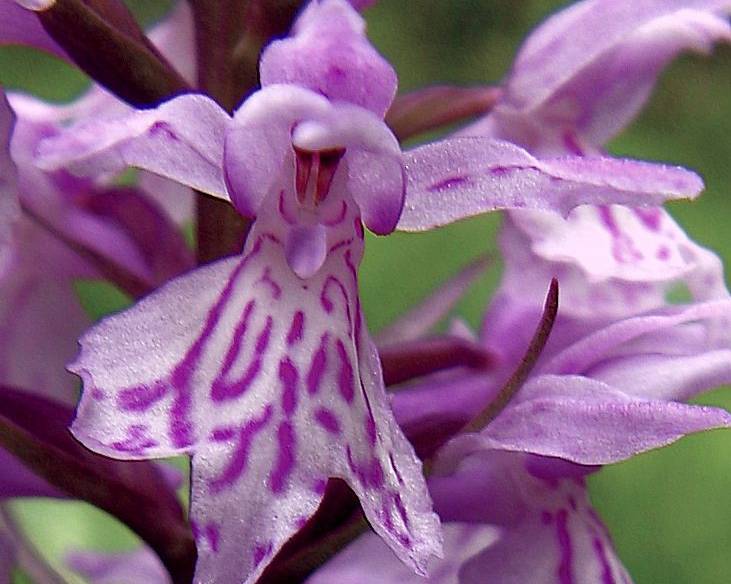 The intricate beauty of hardy orchids, such as this spotted orchid (Dactylorhiza), can rival their indoor counterparts.
All hardy orchid species are terrestrial, which contrasts with the many epiphytic species grown as houseplants. This also means that many of them are dormant over winter, dying back to a crown or pseudobulb (a bulb-like structure).
Most prefer well-drained moisture-retentive soil in dappled or part-shade and they can be grown in containers, particularly Bletilla and Pleione species.

(Epipactis gigantea)
A good place to start, if you want a low-maintenance orchid for the garden, is the giant helleborine. It carries subtle flowers in shades or red-brown to yellow on stems up to a metre in height.
The alternative name of stream orchid hints at its preference for moist soil and it likes a lightly-shaded spot, forming large clumps if left alone. 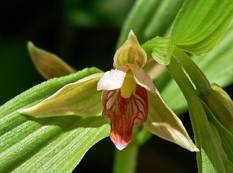 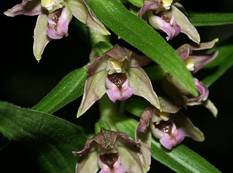 The closely related broad-leaved and marsh helleborines are native wildflowers. 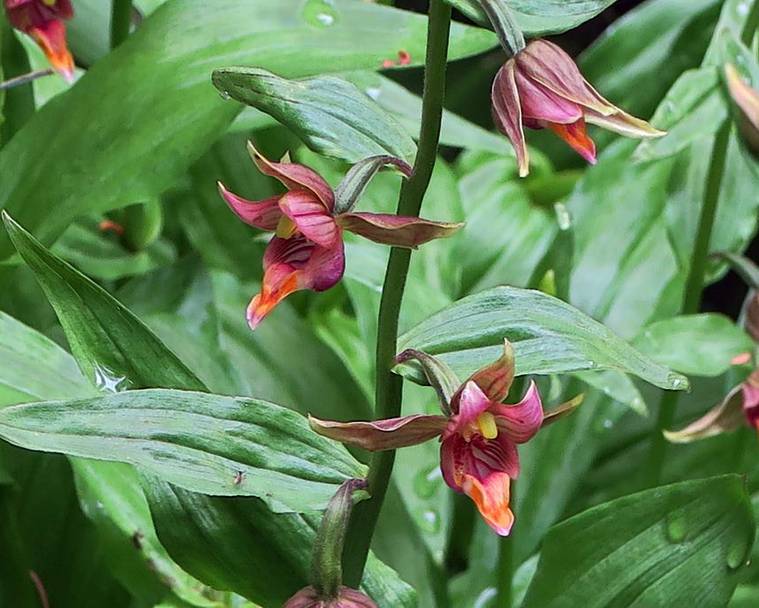 The unusual flowers of the giant helleborine.

(Dactylorhiza spp.)
Many of these species are native to the British Isles and work well in a wildflower area or meadow setup.
They prefer moist, well-drained soils with a little limestone and some species can tolerate full sun, though light shade is preferred.
Always check the species as some of the continental types (such as D. iberica) require shelter and drier soil. The foliage may be delicately mottled and flowers vary from near-white to deep purple. 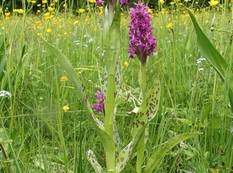 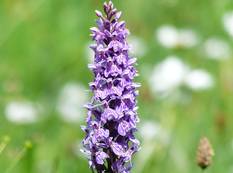 (Calanthe discolour)
An easy-to-grow garden orchid which is part of a much larger family of exotic species, so always check for hardiness.
There are many varieties of C. discolour, as well its hardy relatives, C. sieboldii and C. reflexa. They bloom in spring and come from forest floor environments, so dappled-part shade is best. Can tolerate drier soils. 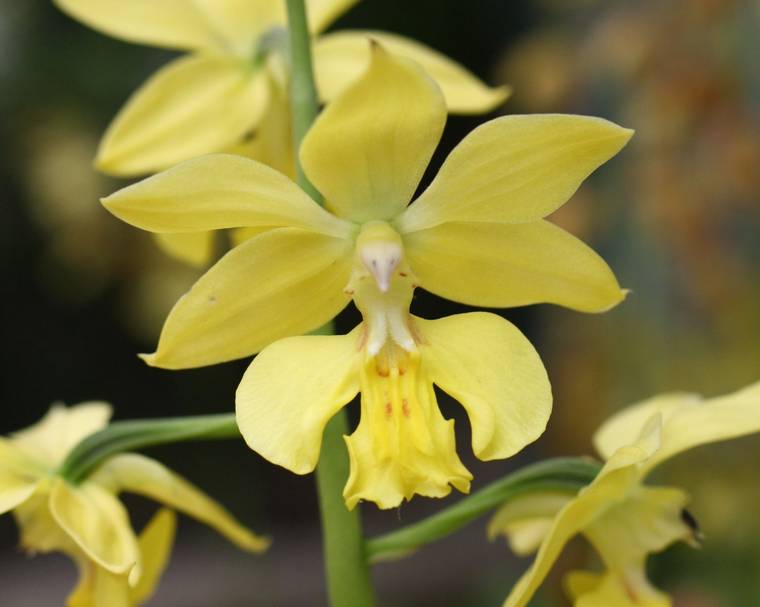 (Bletilla striata)
One of the most common garden orchids, the Chinese ground orchid, is often simply listed under the name ‘hardy orchid’.
Bletilla has long pleated leaves and vivid purple flowers during early-midsummer held on stems around 45cm high.
You will find the plant sold as dry pseudobulbs available for planting in spring or as growing plants during the flowering season. Although hardy, keep sheltered for best results (Pictured, main image). 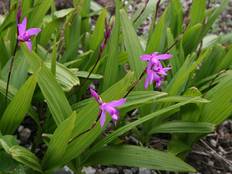 (Pleione formosana)
A favourite among alpine enthusiasts, the windowsill orchid grows from pseudobulbs and can usually be found in dry form during the spring bulb season.
The leaves are attractively pleated, but it’s the flowers which steal the show. Borne on short stems, they are a vibrant magenta with a contrasting throat and tend to flower simultaneously, giving a lively show. 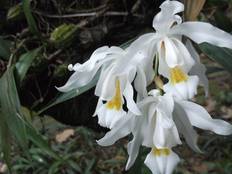 Plant in spring and water gradually until growth commences then keep nice and cool over the growing season.
Come autumn, reduce watering as foliage dies back and protect dormant plants from winter wet under a cloche or in a cold frame. 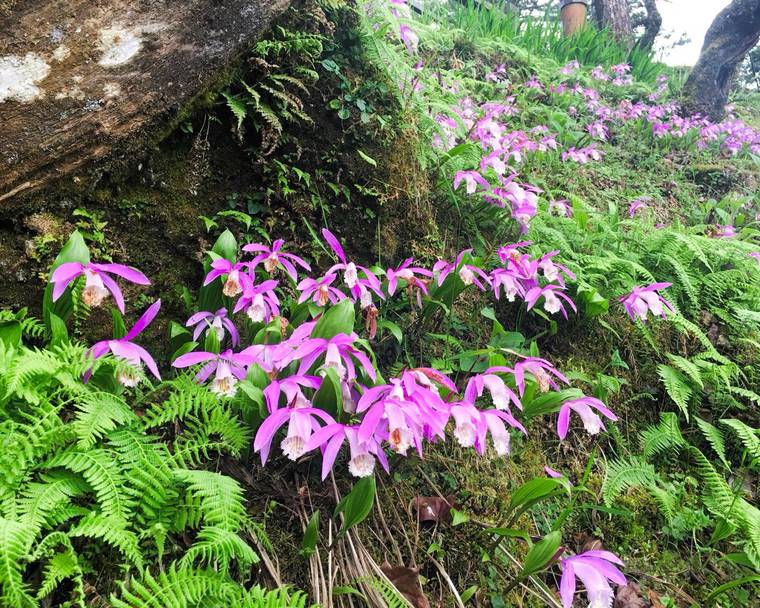 (Cypripedium spp.)
Queen of the hardy orchids, Cypripedium has a reputation for rarity, high prices and fussiness.
This is more of a garden orchid for the enthusiast, somebody who wants to try something new and prestigious. You can buy dormant plants from specialist suppliers and growing stock is becoming more widely available at garden centres.
Hybrids tend to be easier to grow than the species types and they require free-draining soil with a little limestone. 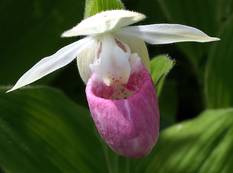 Locate in a sheltered site away from wind and protect from late frosts and slugs, never allow plants to fully dry-out, even in winter and keep cool during the summer months to avoid deterioration.
Not the easiest orchid, but certainly the jewel in the crown of any collection. 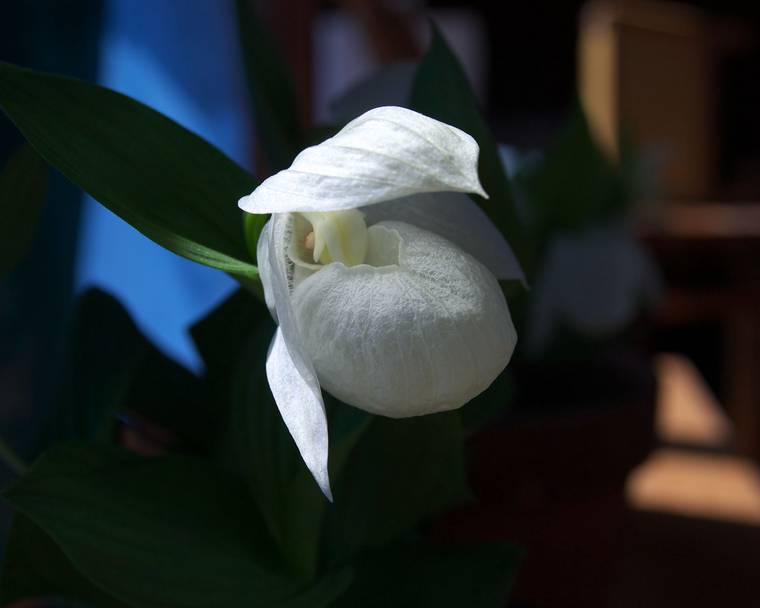 There are countless Cypripedium species and hybrids to choose from and they can become an addiction!
Read more about the orchid family here: 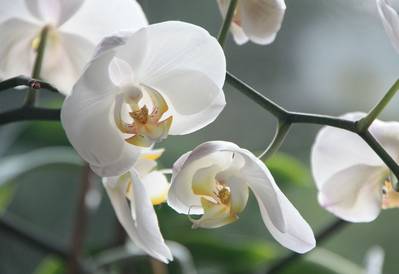 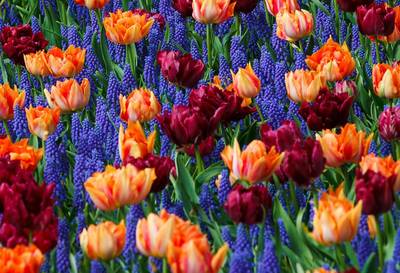 Whether they’re flowering in your garden or cramming the shelves in garden centres, bulbs are everywhere right now. Looking at... 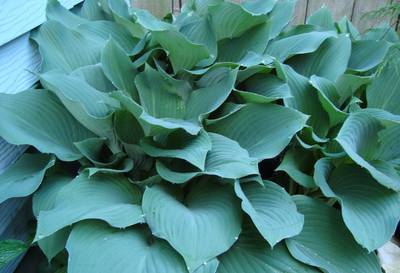 One of the Candide Community recently asked, "What can I grow in front of my conifer hedge?".