Hedgehogs have captured the hearts of the public, but their population is facing a worrying decline. Following the loss of over half of hedgehogs since 2000, The Woodland Trust is urging people to attract the mammals into their gardens this season. 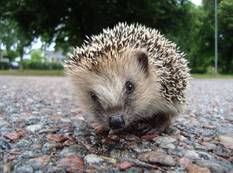 During autumn, hedgehogs start preparing for their winter hibernation which usually begins in early November. For this reason, they need to be near a good food supply. People are being encouraged to create hedgehog-sized gaps in their fences. Supplementing the mammal’s diet with tinned cat or dog food and safety-proof ponds can also help conserve the species.

In the 1950s, it was estimated Britain was home to 36.5 million of the nocturnal animals. However, it is believed this figure was based on limited data and, therefore, an overestimate.
According to the British Hedgehog Preservation Society (BHPS) and the People’s Trust for Endangered Species (PTES) in 2017, there are currently approximately 1.5 million hedgehogs across England, Scotland and Wales collectively with about 1 million West European hedgehogs living in the UK. Evidence suggests numbers are continuing to decline.
Download Candide to your phone to get your daily gardening news

Project manager at The Woodland Trust and former senior hedgehog officer at Warwickshire Wildlife Trust, Simon Thompson, claims gardens are an essential habitat for the small creatures to find shelter and hibernation. He explains the most important thing people can do is connect their gardens and create access for hedgehogs to pass through.

‘It is increasingly vital that those gardens which occupy hedgehogs do what they can to maintain them and make space for them, not just for hibernation but for transit and moving around,’ says Simon.
Hedgehogs will lose 30 per cent of their body mass during hibernation. Autumn is a time when they need to be finding enough food to put on enough weight to survive hibernation, he adds.
‘Autumn also brings other things – it’s bonfire night,’ says Simon, ‘to hedgehogs, bonfires are a fantastic place to hibernate, but obviously they’re not because they could be set on fire. If you are having a bonfire, it’s well worth moving it before it is lit and at the very least looking inside it before it is lit.’

Raising awareness about how we can use our gardens is also an effective method to protect hedgehogs.
‘If you don’t have green space of your own then there are things you can do. The BHPS run various campaigns to raise awareness. You can talk to your local council to make sure they are managing their green space in a way which is sympathetic to nature and, of course, you can talk to people with gardens,’ says Simon.
Further, The Woodland Trust warns that we should not use slug pellets in our gardens as they are poisonous to hedgehogs and to be careful when clearing up piles of leaves as a hedgehog could be hiding underneath.
Hedgehog Street – a campaign to protect the species ran by BHPS and PTES – agree: ‘In the past decade, we have lost over a half of rural hedgehogs and a third from towns and cities. The decline in towns and cities seems to be slowing, but the situation in the countryside is a real concern. This decline is not sustainable, and it could be that we lose our spiky friends for good.’
Hedgehog Street is also working with farmers to manage land more sensitively.

The UK’s only spiny mammal first evolved approximately 15 million years ago. There are 17 species in five genera of hedgehogs worldwide, and they live across Europe, the Middle East, Africa and Central Asia.
Earlier in the year, the Department for Transport revealed a new traffic sign warning motorists of small mammals in the road in an attempt to preserve hedgehogs.
Simon explains: ‘It is hoped that the population will stabilise and thrive. We hope there will be more space for hedgehogs. Making space is not just protecting hedgehogs now; it’s protecting hedgehogs in the future.’
You can mark sightings of hedgehogs on The Big Hedgehog Map. Plus, find out how you can make your garden hedgehog-friendly.
Free download for your phone or tablet

Ellen Mary and the New Era of Garden Influencers

One of Grow Your Own Magazine'sTop 5 Women Influencers in Horticulture, she hosts a gardening podcast, gardening radio show...

Christmas Trees and Brexit: What To Expect for the Rest of the Year

Every year garden shows across the country dominate what we are buying for our garden (or wishing we were).

With global bee populations under threat, an unusual ‘green’ transport feature entering the cityscape could boost habitats for...