Roadmap to Recovery: How to Save Insects from Extinction

If you have a garden, you will know how important insects are to that small ecosystem. Not only are they food for bigger animals, but they are also responsible for the pollination of 80% of all plants. Recently, scientists and farmers have noticed a huge decline in the world’s insect population. Nearly ¾ of insects have disappeared. Now, a group of international scientists have come together to write a paper outlining “a roadmap to insect recovery”.
Hans de Kroon, one of the scientists who worked on the paper, says: “Most people associate insects with being annoying. But they are so important for our ecosystems. Thirty years ago, the insect population in those ecosystems was much bigger.”
Kroon is a professor at Radboud University in the Netherlands. Apart from signing the roadmap, he also wrote a paper in 2017 titled “More than 75 percent decline over 27 years in total flying insect biomass in protected areas.”

“We wanted to find out why there were so few insects left”, says Kroon. “At the end of the paper, that reason was still unknown.”
However, over the last three years, Kroon has gotten an idea for the reason of the insect decline. He thinks it is a combination of two different reasons. Firstly, the insect’s habitats have been reduced, meaning there is less space for them to be in.
Secondly, agricultural land has increased, bringing with it nitrogen and pesticides which kill insects. “If insects want to cross from a nature reserve to another, they will almost always have to cross agricultural land which they don’t always survive”, says Kroon.
The roadmap to recovery is a call to action by scientists, telling people what needs to change if we want to save insects and with them, our food sources. Solutions include banning pesticides and prioritising nature-based farming methods.

The scientists praised the example of Germany, which announced a €100m action plan for insect protection in September 2019, calling for other governments to do the same. They add in their paper that “global biodiversity is a serious threat that society must address.”
Kroon also asks individual gardeners to make small changes that could lead to big impacts. “Here in the Netherlands I see a lot of communities coming together and helping to create spaces for insects”, says Kroon. “In my neighbourhood, people turned a small patch of grass into a flower bed with an insect hotel.”
Kroon wants to encourage people to do small things like that. He suggests looking up which flowers are native and insect friendly and planting more of those.
“Plus, don’t forget about insects in the winter. Make sure your soil is healthy and leave some dead plant matter for insects to live in”, says Kroon. 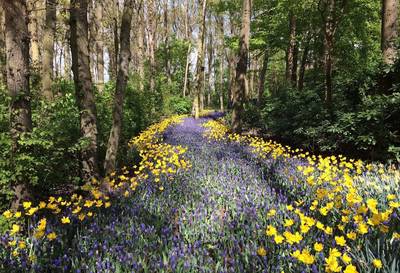 Europe’s largest conservation charity are holding a wellness weekend during this year’s leap day at their Plas Newydd site in...

How Refugees Are Growing Food From Discarded Foam Mattresses

An arid desert landscape is the last place you’d expect to find a green oasis, but amid the corrugated shelters and makeshift...

Plant of the Week: Snowdrops

It is Snowdrop season in the UK and Helen visited Yeo Valley to see their wonderful snowdrop collection.