Fast-growing evergreen shrubs can be incredibly useful to a gardener.
They are brilliant at providing screening from a busy road or covering up an ugly sight.
To help you pick, I've picked six of the best and will quickly run through their pros - and some of their cons.
If it's flowering shrubs you're after, I've put together another list: Cotoneaster lacteus red berries
Cotoneasters grow fast, but be careful as not all are evergreen.
In my experience, the best fast-flowering evergreen varieties to grow are Cotoneaster 'Cornubia', C. x watereri, C. lacteus and C. franchetti.
Both Cotoneaster lacteus and franchetti are excellent choices as a hedge species. All will have an ultimate height of 2.5 - 3 m.
These varieties hang onto their leaves well in all but the hardest winters and will reward you with insect-friendly spring flowers and very showy winter berries that birds love to feast on.
It's hard to think of drawbacks for Cotoneaster, but they are prone to a fortunately uncommon bacterial disease called fireblight.

Pyracantha coccinea - The scarlet firethorn
Like the cotoneasters, Pyracantha is great for insects when in flower and for birds in winter when covered in berries.

The firethorns are thorny, as its name implies, so this is an evergreen shrub that not only grows very fast but will also deter garden intruders.
Spring flowers are always white but the berry colour can be red, orange or yellow.
Shrubs can take up a lot of space but can be kept in check by pruning.
Will reach an ultimate height of 2.5 - 3m.
Some Pyracantha varieties are prone to scab disease, especially in the wetter western half of the British Isles.
Some varieties have very high levels of resistance to scab - those varieties that begin with the name 'Saphyr'.
Need to identify a plant? Download Candide to get instant Plant ID 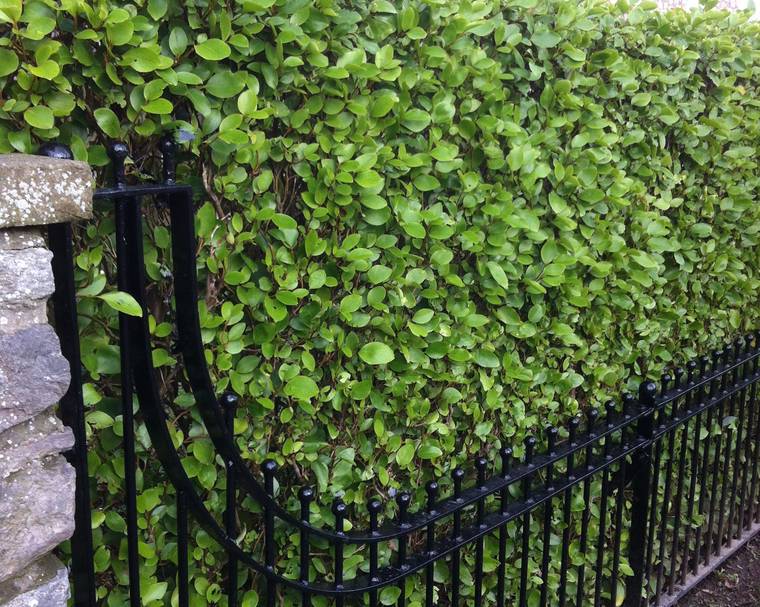 Griselinia littoralis hedge and fence
As the climate in the UK gets milder, Griselinia is rapidly becoming the go-to quick growing evergreen.
Originally from New Zealand, this shrub grows well in Britain and Ireland, especially on the western side of the British Isles.
This is because it isn't fussy about soil types and will tolerate quite wet conditions.
Although the flowers aren't very noticeable, the leaves are a pleasing apple green all year round. It will grow at 30 - 40 cms per year, with an ultimate height of about three metres.
This is a great choice to grow near the coast as it will put up with strong salt-laden winds.
Easily pruned, Griselinia will quickly grow into an excellent screening evergreen.
There are variegated forms, but most gardeners choose it for those apple green leaves.

Everyone knows laurel! There are several types and the one that most people know is probably the cherry laurel. 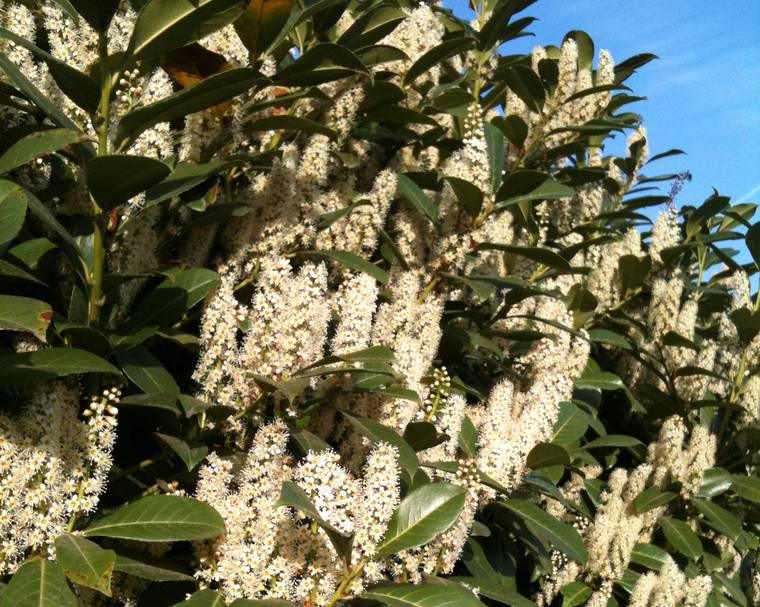 Cherry laurel in flower
The cherry laurel has large leaves, and for that reason, it is better pruned with secateurs. Mechanical hedge cutters can chop across those big leaves which can look untidy.
Laurels are very tolerant of a wide range of soils, and will even grow on thin, chalky soils.
Just as happy in full sun as under the shade of a tree or building, laurel is a tough plant, with an ultimate height of about three metres.
Portugal laurel is gaining in popularity. It has a growth rate of about half that of cherry laurel (30 - 40 cms p.a.), so it will take longer to get to the height you might need. 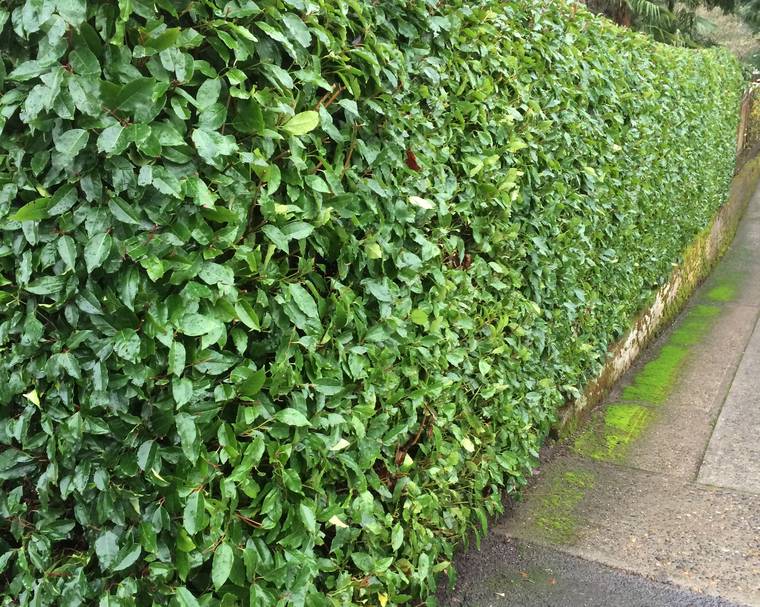 Pink leaves of Photinia x fraseri Louise
Photinia is everywhere! But now there are some new forms to consider.
I've illustrated this with a silver variegated variety, 'Louise' (pictured above) that still has those trademark red emerging leaves that go green as they age.
Photinia has been widely planted for this colour, and with a bit of judicious pruning, more red shoots can be encouraged after the spring flush has faded. 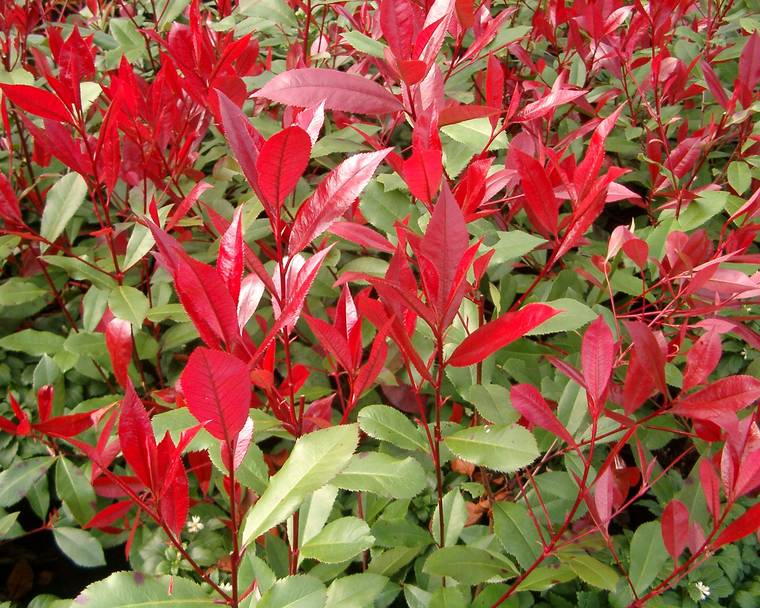 _Photinia x fraseri_ 'Red Robin'
Photina can be very hard pruned if necessary and will quickly bounce back.
These will reach an ultimate height of about three metres. 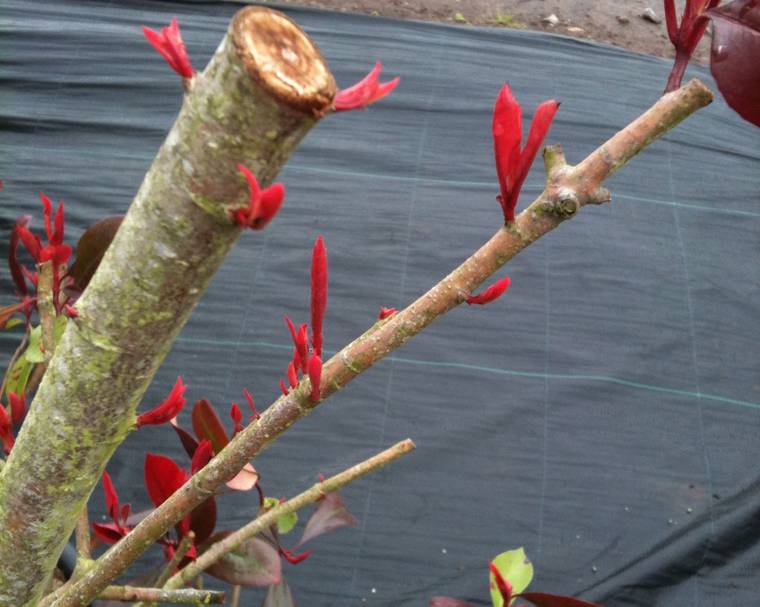 New shoots merge after heavy pruning
Some leaf spotting can occur during winter but new growth quickly covers this unsightliness in spring.

There are many varieties and leaf colours of Pittosporum tenuifolium.

Pittosporum tenuifolium 'Variegata'
Unlike many of the above choices, Pittosporum leaves are small. For this reason, they are easily pruned without spoiling the overall effect of the plant. 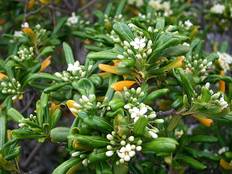 If a pittosporum gets too big or too tree-like, then it can be cut down to a stump and will invariably grow back as a bushier plant. Such drastic pruning is best done in late winter.
Flowers are hidden and almost black, but you won't miss the honey-like scent that they release during spring evenings.
The green pittosporum will grow in shade but those with attractive variegated or coloured leaves are best in full sun.
Free download for your phone or tablet

Flowering evergreen shrubs are invaluable to a garden. Once a year they steal the show with their blooms but also add colour...

How to Grow Chillies

Helen teaches us the basics of growing chillies indoors and how to have success with germinating chilli seeds. 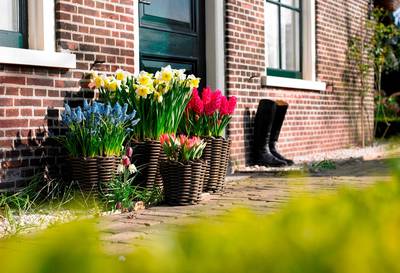 What to Do in the Garden This Week - March 19th

If you're looking for things to do this week, now's the time to pick up the tools and get round to those tasks you've been...