Water Bears, The Secret Superhero That Lives in Your Garden

Written by Katherine Short
Katherine Short is a researcher at The University of Bristol who is currently looking at how Tardigrades colonised the continent of Antarctica.
Have you ever heard of a strange creature called a water bear or moss piglet? They sound like they may be cute and fluffy, or you may have noticed these words describing an animal recently ‘living on the moon’. Are they aliens? Perhaps not, but they are eight-legged (but not a spider!) animals that are the secret superheroes of the microscopic world. 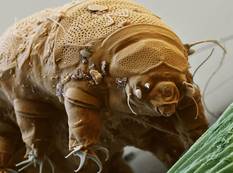 If you are already a superhero movie fan, then you may have seen them in ‘Ant-Man and the Wasp’ as part of the quantum realm, but let’s take a closer look at the real animal behind the movie.

A real tardigrade under the microscope
Download Candide to your phone to find out more about World Soil Day!

Water bears are scientifically known as tardigrades, which means slow (tardi) walker (grade). This name was given to them after the comical difficulty they have walking on Petri-dishes when scientists under microscopes analysed them. In their defence, in their natural environment, they are very good at walking and just struggled with the smooth glass surface.
They are part of the large invertebrate (no backbone) group known as ecdysozoans, which means that they shed their outer skeleton. They are only small (0.1-3mm long), have four pairs of legs, a strange circular mouth that can push out to capture food, and often have eyes.
Water bears come in two main types; heterotardigrades, which are covered in small plates and are often orange and eutardigrades which are soft-bodied. They eat a variety of different things including; detritus, bacteria, viruses, algae, other smaller invertebrates and even other tardigrades!

A hetrotardigrade (right) and eutardigrade (left)
While this information on what water bears look like and eat is pretty fascinating, what makes them a ‘superhero’? What if I told you that water bears lived in every environment on Earth? From the deep oceans to mountain tops to the polar regions and the deserts. They can survive temperatures of -272⁰C to +150⁰C, extreme pressure, lack of oxygen and intense radiation.
They are so good at surviving that there was a scientific programme that sent them into space, ingeniously named TARDIS for tardigrades in space. This experiment found that even after being exposed to the harshness of space, water bears were able to survive.
They survive by entering a state called cryptobiosis. Cryptobiosis is a form of suspended animation where they expel water from their cells and replace it with sugar and shrivel up into a ball shape called a tun. In this state, they can wait out any unfavourable conditions and then re-hydrate themselves when the time is right.
Download Candide to your phone to find out more about World Soil Day!

A eutardigrade in a tun state
Apart from their occasional trips to space, tardigrades can also be found in your back garden in moss, algae and soil. They form a part of the complex microscopic ecosystem that helps to break down waste, returning nutrients to the soil, which is good for gardeners!

Here in the UK, we can find all the different kinds of water bears anywhere that is damp. If you have a hand lens or microscope of 10x or 20x power, why not trying rinsing some soil or squeezing out the water from moss into a small dish and taking a look to see if you can spot some.
So next time you are in the garden, weeding around your plants or cleaning the moss from between your paving slabs, take a moment to think about the miniature superhero living just beneath your feet.
Free download for your phone or tablet